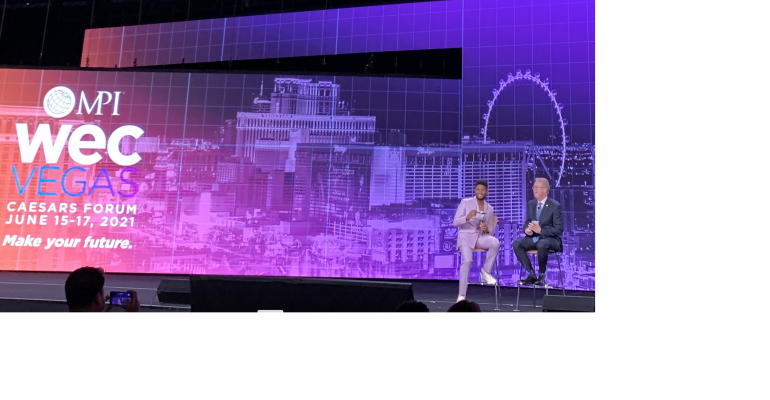 Back to Business: Meetings Industry Gets Together in Vegas

Meeting Professionals International sees more than 1,200 on-site attendees at its World Education Congress, the first large-scale event held at the new Caesars Forum. Here are the hot topics that were discussed.

June 17 to 19 in Las Vegas featured a welcome sight for the entire meeting, convention, and trade-show business: 1,229 planners and suppliers in one place, learning and networking with each other. In some ways, it seemed like old times.

But with the Covid pandemic having sidelined the in-person event segment for nearly 16 months and affecting the way events will happen for the foreseeable future, MPI’s World Education Congress took on a somewhat different look and feel, as did the topics broached by the association’s leadership, industry veterans, and session presenters.

Paul Van Deventer, president and CEO of MPI, noted during the event’s press conference that along with the in-person attendees, WEC drew 568 digital attendees who could watch each day’s general session live but had a separate agenda for breakout sessions. At Caesars Forum, masking was optional for vaccinated attendees and mandatory for unvaccinated attendees, though enforcement was left to attendees themselves. No proof of vaccination was required, and very few attendees wore masks. Security staff at Caesars Forum conducted temperature checks at the building’s entrance each morning.

With room set-ups for general sessions and breakouts, 10-person round tables had just four seats apiece to maintain social distancing, and no tablecloths were used in breakouts so that service staff could clean tabletops easily. With food and beverage for meals and refreshment breaks, all items were individually boxed aside from a few dishes during breakfast that were served buffet style.

GALLERY: At Last, an Industry Conference Gets Back to (Almost) Normal

Also at the press conference, Ven Deventer said that MPI’s total membership was down 35 percent versus one year prior. On the other hand, more than $1 million was raised by the MPI Foundation in 2020 to maintain the memberships of more than 3,100 members, including a $250,000 gift from IMEX Group, owner of IMEX America, the meetings and events industry’s largest North American show.

As for pressing topics discussed at the show, here are some brief summaries:

• In a general session, veteran suppliers addressed the labor shortage across their hotels, venues, and restaurants. “We not only need to find and train new people to fill open positions, we need to retrain those who are coming back into the fold after a year. Things are different on property” and all that training takes time, said Tammy Routh, senior vice president of global sales for Marriott International.

Cleo Battle, chief operating officer for Louisville Tourism, added that “the hospitality business needs to rebrand to draw new people not just for jobs but for careers.” And Van Deventer said that “MPI has a huge opportunity to communicate to and educate those who are in high school and college about the diversity of work opportunities this industry offers.”

• Michael Massari, chief sales officer for Caesars Entertainment, said that “one change that’s likely to become permanent at hotels is that daily housekeeping will go away unless guests specifically ask for it.”

• During day three’s general session, a panel discussion on leadership paths for women in meetings and hospitality featured five female executives, all of whom faced challenges early in their careers, sharing their advice for overcoming those headwinds. Their consensus: While some colleagues and bosses discouraged them from taking internal or external promotions to avoid failing, each of them had at least one influential person encourage them to seize the opportunity, which bolstered their confidence and helped them make the move.

That supportive element was also critical once they took on their expanded roles—each of them cultivated a network of trusted colleagues with whom to discuss work challenges and personal doubts. Stephanie Glanzer, CMP, chief sales officer and senior vice president for MGM Resorts International, said that “in turn, we have to provide encouragement, support, and mentorship to other women not only through such interactions but also through our day-to-day actions that are seen by everyone.”

• Musical artist and entrepreneur Usher had a conversation with Van Deventer during day one’s general session. In that segment, Usher spoke about how planners can work with professional speakers and entertainers to use technology to create better experiences for both in-person and virtual attendees. From a personal perspective, Usher said that the Covid pandemic pushed him “to focus on being present in the moment and putting out positive energy to others because it will come back to you. Don’t dwell on the past; it does not have to define you. Be present and be patient.”