Discovering Moscow for Meetings and Incentives 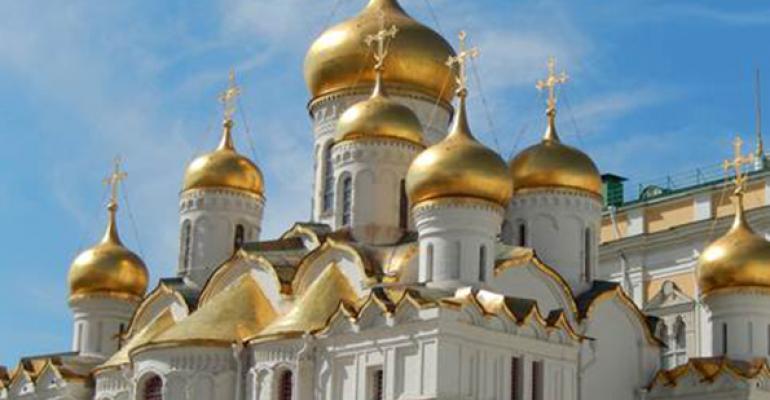 Russians may have moved beyond propaganda, but they’re still pretty big on slogans. T-shirts worn by the staff of Russia’s second-oldest destination management company, Russkie Prostori, a Global Events Partner, proclaim, “Let’s do it!” (The saying, explains Managing Director Ola Kastensson, echoes first-person-in-space Yuri Gagarin’s response to the launch-pad question, “Are you ready?”) Entrepreneur and hotelier Thomas Noll, president of the Hermitage Group, likes the slogan from a recent political campaign: “In Russia, anything is possible.” Commenting on doing business in Russia, Phillipp Lookianenko of Hogg Robinson Group Worldwide says, “Moscow is not Russia and Russia is not Moscow.”

The first two slogans are a perfect summary of the attitude of meeting and incentive suppliers in Moscow: They are ready for groups, mobilizing a whole new base of young, English-speaking hotel and tourism staff to serve your attendees, and they want to tell you it’s all possible.

But that third slogan? Meaningless to most in the U.S., whose perceptions of Moscow may be outdated, inaccurate, or simply nonexistent. “Nobody knows Moscow,” Kastensson says. Even the head of the Moscow City Government Tourist Committee, Shpilko Sergey Pavlovich, calls Moscow “a blank spot on the tourist map.” Indeed, this huge capital city, Europe’s largest, is a huge mystery. But it’s one that is well worth exploring for meetings and incentive groups.

Delights and Challenges
Nearly 200 meeting planners and destination management company representatives began their own discovery of Moscow during the Global Events Partners 2011 Executive Summit in July, along with executives and staff from both GEP and sister company Krisam Group. What they found were world-class hotels in matchless historic settings, compelling event venues, and excellent service. They found royal grandeur, Cold War memories, and chandeliers in the subway. They found a genuine excitement and openness on the front lines of Moscow’s hospitality industry, still a new trade in Russia. They found a thoroughly modern city tinged with hints of old bureaucracy. They also found some crazy traffic and a whole lot of indecipherable Cyrillic (the Russian alphabet).

“I don’t want to hide our problems,” says Pavlovich of the Moscow City Government Tourist Committee. (Pavlovich addressed the GEP Summit with the help of wireless simultaneous interpretation, smoothly delivered in a meeting room at the Hotel Baltschug Kempinski Moscow.) “You may think it’s not good marketing to start with problems, but of course we have problems. We have traffic jams, not enough modern convention venues, visa issues, expensive airfare.

“Nevertheless, during the past 20 years, the picture of Moscow has changed. Many think of Moscow in terms of old stereotypes. But we have business-class hotels, with service and accommodations on the same level as in any European capital, all built during the past 20 years. In 1991, when the USSR disintegrated, there were just three four-star hotels in downtown Moscow. Now there are at least 17 that fully meet the requirements for four- or five-star ratings, most of them run by international networks.”

And many more are on the way as Moscow prepares for a serious increase in tourists coinciding with several events that will draw global attention, including the Winter Olympics in 2014 and the FIFA World Cup in 2018. In July the city government approved a major investment to add English translations to all street signs and metro signs in Moscow.

Other infrastructure already in place includes three international airports, one brand new and two under renovation; fast trains between Moscow and the more traditional tourist destination of St. Petersburg; more boats on the Moscva River that serve as wonderful event venues—now even in winter, with the addition of new ice-breaking boats.

“Moscow is changing,” Pavlovich says. “We also are working in the area of tourism education. I’ve been in the industry for a long time, and I realized how little I know about Moscow.” As a remedy, Pavlovich has begun visiting one Moscow museum per week. The city is home to more than 200 of them. “I invite you and your colleagues to participate in discovering Moscow anew. I promise we are ready to help and support you.”

New Attitude
The same attitude was expressed by general managers from several hotels that sponsored events or hosted attendees during the GEP Summit. “Russia is not the country you see on CNN. Russia is the young people you see in the hotels,” says Leon Larkin, general manager at the Grand Hotel Europe St. Petersburg, an Orient-Express Hotel.

Larkin sees two things holding back meetings business from the U.S. “The first is security. People are concerned when they shouldn’t be,” he says. “And second is the visa issue. I wish the process was simpler. But the mega events coming up will force them to facilitate the process.” In fact, Elena Kastensson, executive director at Russkie Prostori, says that the country’s minister of tourism is considering adding a third type of visa—a conference visa—whose application process will be streamlined.

“St. Petersburg is a ‘wow,’” Larkin says. “People always come away saying it was the best meeting ever. Indeed, the whole country is a wow for meetings and incentives. I feel sorry for the country you pick next time.” But he acknowledges the growing pains as well. “The new Russia is only 20 years old. The infrastructure is new; the road system is new. Accept that things will improve.”

And recognize one terrific resource that’s already there, adds Thomas Noll—an enormous number of people who can deliver service to your guests. “Today you see smiles in Russia,” says Noll, who recounts one gala dinner for 200 guests where 200 servers set down dinner plates at exactly the same time.

Anthony Fardon, general manager of the newly opened Renaissance Moscow Monarch Centre, has been in Russia for 30 years. “We will do everything we can to take care of any business you send us,” he says, adding that international hotel general managers meet with government officials monthly. “Russia has come a long way and is trying to encourage MICE business,” he says. “It used to be an overnight train to St. Petersburg, now it is a modern high-speed train. Russia is spending on infrastructure. The World Figure-Skating Championships were held here recently, arranged by Russia in a month. It was flawless. We can do this. We can take care of your events.”

Can Moscow Motivate?
It’s a message Ola and Elena Kastensson are trying to send to U.S. meeting planners as well. “Russia is a hard sell,” says Ola Kastensson. He tries this tack: “How long does the memory of an incentive trip typically last? When you come here, you have a story to tell. It’s two or three months versus ‘they are still talking about it.’ And when people ask your attendees, ‘Why did you go to Russia?’ they will say, ‘Our company took us there.’ That’s ROI.”

Kastensson, a native of Sweden, sees a shift in U.S. incentive programs after the bottoming out of the economy. “I think we are coming back to the original intent of incentive travel. Now you really have to motivate people. You need something that is that little bit extra.”

As the head of a DMC, Kastensson is well aware of the traffic tangles that plague Moscow’s city center—and he knows how to work around them. For one thing, half the traffic disappears on weekends. (Those in attendance at the GEP Summit found this to be true, and possibly even a conservative estimate.) Plan any major transfers for Saturday or Sunday. For a weekday excursion, plan a Metro tour that also serves as a transfer. (Moscow’s legendarily beautiful subway system is itself a tourist attraction.)

Moscow’s paradoxically most famous but perhaps least-known attraction is the Kremlin, the heart of both Moscow and Russia, and post of leaders from Ivan the Great to Gorbachev to current President Dmitry Medvedev. A triangular-shaped area enclosed by walls, the Kremlin (the word means “fortress”) includes three cathedrals, 19 towers, palaces, government buildings, and the serene and colorful Alexandrovsky Garden.

Another must-see is the Tagansky Cold War Museum, a unique tour that takes visitors down 18 stories to a former communications bunker under the city. While the rooms and tunnels are essentially empty, the experience is a chilling reminder of the Cold War period. That you can hear the roar of subway trains nearby adds to the ominous atmosphere.

The hightlight of a summer evening, with the sun setting well after 10 p.m., is an amble around Red Square, anchored by the riotous architecture and color of St. Basil’s Cathedral.

Along with world-class hotels, Moscow is opening restaurants at a furious rate, some 200 per year. “St. Petersburg is the Paris of the East; Moscow is the London of the East, meaning it is the financial capital,” says Thomas Noll. “But it also has a restaurant scene, and will soon become a culinary capital of Europe if it continues with the speed of development today.”

And it may well become a top incentive choice in coming years, too. But for incentive attendees fortunate enough to travel to the city now, they will truly enjoy an experience that few others have had. Russkie Prostori was launched in 1993, only the second DMC in Russia. “It has been a learning process,” says Elena Kastensson. “No one knew what an incentive or conference was for the first 10 years. There was a lack of hotels in the beginning. Moscow has only been an incentive destination for the past seven or eight years.” Now, itineraries that combine Moscow and St. Petersburg are starting to emerge.

For GEP Summit attendees, the promise of Moscow as a meetings destination was captured in the eagerness and service orientation of 15 students from the Institute of Tourism serving as interns for Russkie Prostori. “The Summit is their first international experience,” explains Ola Kastensson. “The hospitality industry is new. These students are the base of tourism expertise in Russia.” If that’s the case, the industry has a bright future ahead.