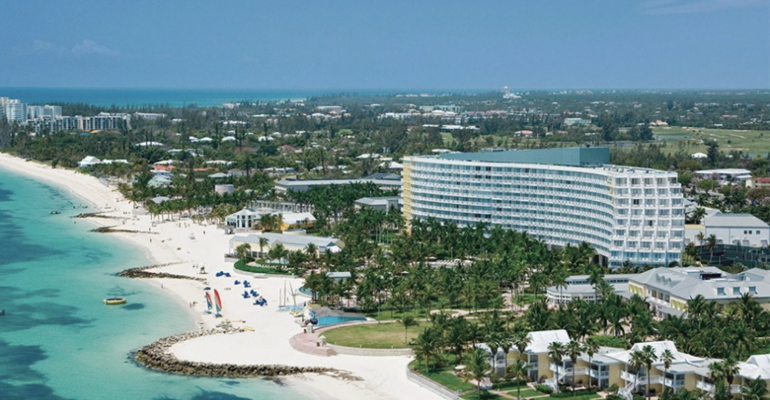 The islands of Great Abaco and Grand Bahama are devastated, but group-heavy resort destination Paradise Island seems to have avoided any lasting damage.

Parts of the Bahamas will be forever changed by Hurricane Dorian, including Great Abaco and Grand Bahama. Those two islands in the northern part of the Bahamas saw the eye of Hurricane Dorian come directly overhead, bringing sustained winds of more than 180 miles an hour for more than 24 hours plus storm surges above 20 feet because the storm moved westward at just two miles per hour on August 31 and September 1.

For the meetings and incentives market, the ability to once again use Great Abaco and Grand Bahama might well be measured in years. While Great Abaco has several small resorts, Grand Bahama is home to Grand Lucayan Resort, a 215-acre group-focused property that is in the process of being sold by the Bahamian government to Royal Caribbean Cruise Lines for $65 million. Royal Caribbean’s plan was to conduct a two-year refurbishment of the property after completion of the purchase. But with more than 60 percent of Grand Bahama underwater as of September 3, it seems that Royal Caribbean’s renovation of the property will require a much larger effort than first envisioned.

As for Paradise Island and its main city of Nassau, located 90 miles south of Great Abaco and 130 miles southeast of Grand Bahama, the center of Hurricane Dorian remained far enough away to spare the group-heavy resort destination from sustained winds above 90 miles per hour and the worst storm surges. As a result, Atlantis Paradise Island (photo below), a 2,000-room collection of resorts under one banner, was able to put out a message via social media on September 1 that read in part: “We are grateful that Atlantis Paradise Island and Nassau were not impacted by the storm. Our guests, the marine mammals in our care, and our team members are all safe and secure.”

Other meeting- and incentive-focused properties on and near Paradise Island include Grand Hyatt Baha Mar, Hilton Grand Colonial Resort, and Melia Nassau Beach. A spokesperson for Grand Hyatt Baha Mar provided MeetingsNet with this statement: "The island of New Providence sustained minimal damage, and Grand Hyatt Baha Mar is open and fully operational, as is Nassau’s Lynden Pindling International Airport (LPIA). We extend our deepest love, full support and prayers to all those enduring the devasting impact and damages of this storm, especially our neighboring islands, The Abacos and Grand Bahama. Many of our associates have relatives living in the affected islands, so this devastation is personal to everyone at Baha Mar."

In the days ahead, Florida appears to be in the clear from seeing the worst of Hurricane Dorian, as the storm began moving northward while centered off Florida’s east coast. Cities from West Palm Beach to Miami did see some minor flooding along their coastlines, and Orlando canceled more than 90 percent of its flights on September 3. But no damage of any consequence for meetings and incentives was reported in those destinations. Parts of the U.S.’s southeast coast are still evacuating, however, as the hurricane’s projected track brings it closest to land near South Carolina.