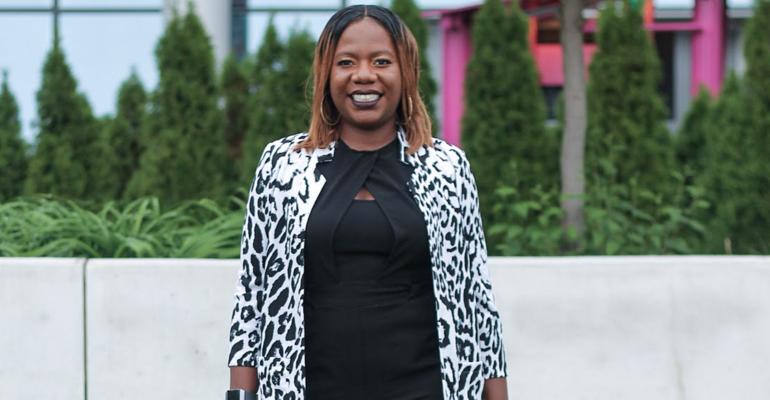 For creating community within her organization and across the Washington, D.C.-area hospitality industry

Not every meaningful change is big, bold, and in need of a five-point plan to see it through.

It was early June 2020 and Shameka Jennings, MTA, CMP, DES, was then serving as director of meetings and partnership development at the National Coalition of STD Directors. She was feeling the emotion of the George Floyd protests taking place around the country, including in Washington, D.C., where she’s based and wanted to connect with other Blacks in her organization.

“At the time, I was the only Black senior staffer, so I wanted to check in to make sure everyone was doing okay.” Without giving it too much thought, she created a private Slack channel, a chat room where Black staffers at NCSTDD could share their feelings and create a sense of community. “We talked about the creation of Black Lives Matter Plaza and what that meant, about the gassing and rubber bullets [used on protestors]. We talked about the emotions and the trauma while still producing high-quality work,” she said. “You can’t leave [those emotions] at the door because it’s ingrained in who you are, so that’s why I wanted to create the space.”

The Slack channel led to friendships outside the chat room as well as conversations between Jennings and her manager about how the organization can be more supportive of Black employees. Further, racial equity conversations began evolving the work of NCSTDD and its approach to health equity. “People of color are disproportionately impacted by STDs,” says Jennings.

Jennings, who was named to the board of the National Coalition of Black Meeting Professionals last fall, isn’t new to creating community. In 2019 she organized a happy hour for women of color in the D.C.-area hospitality industry. She planned it as a one-off event, but the response was, “When’s the next one?”

Jennings got the group rolling. She now affectionately dubs it Black Girl Magic Hospitality.  “I started it because I wanted to connect with people who look like me who work in the hospitality field.”  The group is about checking in, creating mentorships, and uplifting each other, she says. They discuss speaking opportunities, job openings, and questions about the work they’re doing. They now have a LinkedIn page and, after a year of online meetings, the group planned to return to in-person get-togethers in May.

With a little help from her community, Jennings has pushed herself professionally this year. She submitted abstracts to speak at industry events (“It’s really not that scary”) and secured a spot on the agenda for a local chapter meeting of Meeting Professionals International.

“Now it’s about encouraging other people,” she says. “We do have to be that change we want to see. We’re here to support each other.”