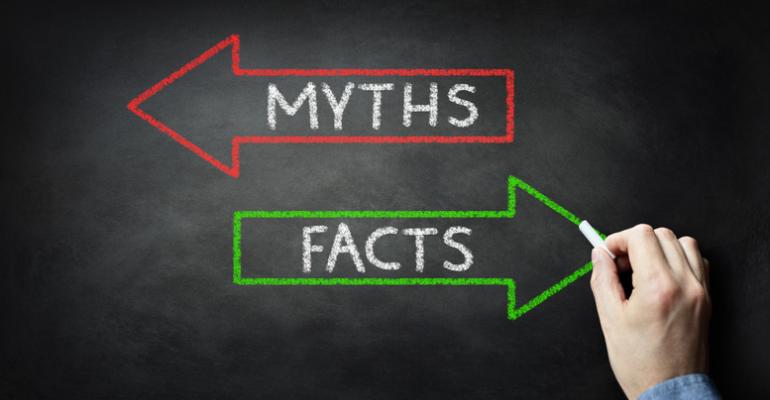 When it comes to the continuing medical education commercial support grants process, what you think is true may, in fact, be a myth.

Ted Singer, CHCP, president of PVI, PeerView Institute for Medical Education, collected 27 myths about the grant review process, then asked a panel of three commercial supporters to provide the real skinny during a session at Fall 2017 CMEpalooza, a free one-day educational event organized by Derek Warnick, senior manager, healthcare education, at Pfizer; and Scott Kober, MBA, CCMEP, principal at MedCaseWriter. CMEpalooza is held twice annually, with the next coming this April.

Here are just a few of the potential myths they tackled (view the full session on demand here). Ready to test your grant review knowledge?

1. Commercial supporters like to see grant requests seeking support from multiple companies mostly because they want to stretch their dollars further, not so much because of compliance reasons.
Somewhat true. Requests for multiple supporters do decrease the potential perception of bias, but also, especially for programs on topics of interest to several companies, a company would feel better about supporting it if others in that clinical area were kicking in, the panelists said. A proposal seeking multiple supporters likely would be able to occur if a company supports it at a lower amount, since there’s the potential other supporters could make up the difference. As one panelist said, “If it’s a situation where it’s a single support and it doesn’t fully align strategically with us, then we have to make a decision. If we have money and want to support it, will the activity still continue if we only provide partial support?” In that case, the supporter would reach out to the CME provider to assess if there is the potential for other companies to support it as well.

2. Unsolicited submissions will get more attention than a response to a request for proposal, since an RFP generates so many responses.
Generally false, though it may be true for some companies. They noted they’re seeing a trend toward companies focusing more on RFPs—or, as one panelist called them, requests for education, or ROEs—than responding to unsolicited requests. If an unsolicited request comes in that aligns with a current RFP or ROE, some companies might put them in the queue with the other responses to the request. But if an unsolicited request for a larger dollar amount comes in, the company may not have the funding for it at the time and so wouldn’t be able to support it. One panelist said that the unsolicited requests that his company typically supports would be grand rounds and smaller local or regional conferences. Commercial supporters have to be strategic about how they spend their limited budgets, and RFPs provide a way to ensure they get grant applications that will have a higher likelihood of getting approved.

3. While there is a lot of talk about wanting to support higher level outcomes, such as improved patient or population health, the reality is that the metric that most satisfies decision-makers within commercial supporters is how many participants you can get.
Somewhat true, with a big caveat. Companies often do factor in a cost-per-person analysis of a request, said one panelist, so knowing the estimated audience is important. But, he added, “Really for us it’s more around the educational need that’s being addressed and how the program is going to accomplish that. We have to go back to our internal key stakeholders and demonstrate the value, and sometimes that is based on the number of people who are attending the education, but we’re trying to get them to understand that it goes beyond that.”

However, said moderator Ted Singer, “When you folks are trying to present your case internally about the value of what you do to a large group of stakeholders in a meeting with a packed agenda, you often don't have a lot of time to get into the real details of what you do. Therefore, a number that’s large can be an easy way to communicate that you’re delivering value for the spend. Is that accurate?” The panelists agreed that one of the main things their stakeholders want to know is the number of participants the activity will reach—but they also want to know if it will result in changes in practice and potential benefits to patients. “The patient outcome is the most important thing,” said one panelist. “But you’re correct. We do have limited time, and numbers are good.”

Another panelist told of a proposal for a Level 7 quality improvement initiative to minimize sexually transmitted diseases in a small community. As much as he wanted to support a Level 7 activity—one whose goal is to improve community or population health—he just couldn’t justify spending the money when the impact would be limited to such a small community instead of being used to support an educational activity that reaches a much larger population.

5. Committees view faculty listed in a grant as an important way to determine how well the CME provider understands the topic—poor faculty choices can torpedo a grant request.
True. While some companies don’t even want to know who the faculty would be to eliminate any potential for bias, if you do list faculty, who you choose to list does indicate how well you understand the topic and who the key opinion leaders, or KOLs, in that topic are. Most panelists said that while it wasn’t a critical factor, they do look at the faculty list if one is provided to see if it includes topic KOLs, and if they are appropriate for the audience (i.e., someone who can tailor the information to physician assistants or nurse practitioners, for example, if they are among the designated audience for the activity).

6. The grant committee will reject a grant if the supporter’s needs assessment, published within the RFP, is used verbatim in the provider’s proposal.
True. Generally, the needs assessment in the supporter’s RFP is not as robust as they would like to see in responses. Providers should provide much more elaborate needs assessments, including the different types of education that would be required to close the practice or knowledge gaps. “We would definitely reject it if they just copied and pasted,” said one panelist.

7. A very high percentage of submitted grants are eliminated during screening and never make it to a committee for review.
False. “That’s a myth,” said one panelist. “We evaluate each grant, and each one makes it to the committee.” The only time a grant would be immediately rejected, said another, is if it’s not related to any available therapeutic area—“If it’s about toenail fungus and we’re just not in that space, it wouldn’t go on to committee,” said another—or if the dollar amount being requested is beyond the available threshold.

8. Commercial supporters tend to prefer certain types of accredited providers—say a university over an accredited medical education company.
False. “It doesn’t make a difference,” said one panelist. “It is the quality of the program and how it aligns with our strategy that counts.”