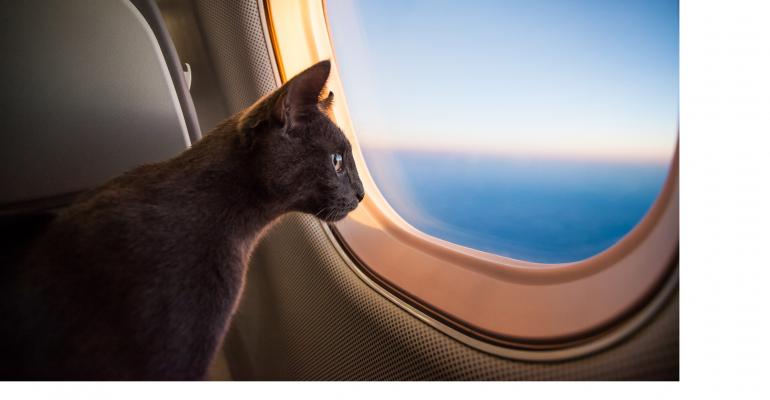 How do we accommodate the emotional needs of some passengers without endangering the lives of others?

Just before Thanksgiving, the Delta Air Lines flight I took to London had an emotional support cat in the first-class cabin. I know this not because I flew first class, but because four nervous and disgruntled passengers with first-class tickets were forced to sit in economy with me because of cat allergies. Apart from the obvious inconvenience of sitting upright all night instead of stretching out in a first-class seat, there is the small matter of possibly dying because of exposure to cat dander while over the Atlantic. According to a flight attendant I spoke to, the cat stayed in its carrying case during the flight except for takeoff and landing, when it sat on its owner’s lap or on the seat next to it.

On the return flight, I noticed a therapy dog in the next row to me. This dog was trained to warn its owner of impending seizures. I only know about the medical reason for the dog because I heard an official in the departure lounge offering to move the passenger sitting next to it to another seat.  The passenger declined because he wanted to stay in a bulkhead row, and he wasn’t disturbed by the animal. It curled up out of the way under the seat, ignored all attempts to be petted or fed by other passengers, and kept one paw on its owner’s foot at all times.

A few thoughts struck me about those two flights. First, there are a lot of animals flying these days. It’s not just my anecdotal evidence, this story in USA Today estimates that U.S. passenger airlines carried 751,000 comfort animals and 281,000 service animals in the cabin in 2018. Second, do airlines deep clean seats that may have animal fur on them? It’s possible the next person to sit in that first-class seat may also be allergic to cat dander but have no way of knowing the space was contaminated in time to switch seats or change flights. Passengers who suffer from asthma and other allergies could have reactions to therapy dogs, but I’m guessing that animals trained to sit quietly under the seat present less of a risk than ones touching things a passenger would touch, such as seat cushions or armrests.

This Forbes story from December 2019 brings up some other issues surrounding animals in the cabin, including pigs, peacocks, and monkeys, and suggests that the issue of emotional support animals, which often have questionable certifications printed out from the internet, needs to be addressed this year. According to the story, one emotional support animal attacked a flight attendant who needed five stitches in her hand. If the number of animals in the air continues to increase, it is only a matter of time before a passenger or cabin crew member is seriously injured or dies as a result.

One way to improve the situation is to only allow animals who have passed a rigorous training, like the therapy dog, to be certified as emotional support animals. Another way is for airlines to notify other passengers as soon as an animal is booked on a flight and indicate the seat row and number, so they can determine whether they want to take the risk before the plane leaves the ground. (See how Japan Airlines is doing something similar with babies.)

Hopefully, a way can be found to accommodate the emotional needs of some passengers without endangering the lives of others.

A Tricky Balance: Staffing Levels and Show Demand
May 07, 2021