/sites/all/themes/penton_subtheme_meetingsnet/images/logos/footer.png
Recent
Recent
A Restored Washington Seminary Opens as a Hotel
May 07, 2021
Industrialist Hotel Opens in Pittsburgh’s Business District
May 06, 2021
Could Your Meeting Get Lost in Translation?
May 05, 2021
LeZotte Crosses the Potomac for New Role at AMC Institute
May 05, 2021
In Event Spaces, Use Nature to Nurture
May 04, 2021
Featured
Virtual Events: We’ve Reached the Tipping Point
May 05, 2020
The Meeting Planner's Risk-Management Resource
Mar 04, 2020
The Welcome Guide: Tools and Ideas for Inclusive Meetings
Oct 07, 2019
2020 Changemakers
Jun 02, 2020
face2face
brought to you by 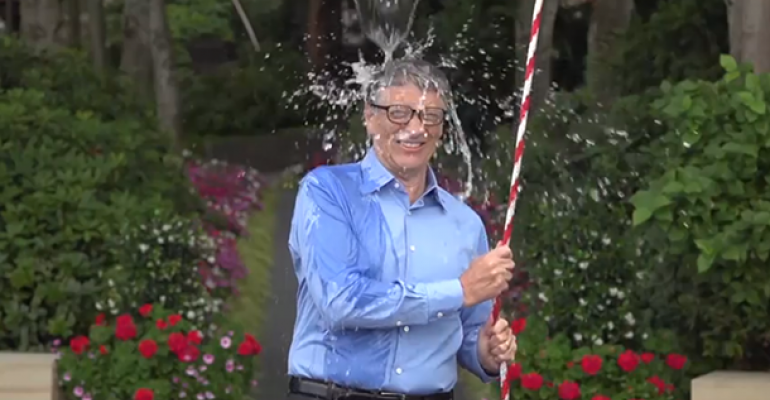 I just clicked through to read PCMA's What Your Organization Can Learn from the Ice Bucket Challenge in terms of fundraising, and found it interesting. And I think Carolyn Clark, who wrote the piece, is right in pointing out what makes it work: It's a simple, easy, call to action that makes it fun(?) to share while helping a cause. No one could contest that has been a huge boon to the ALS Foundation, which saw its charitable giving increase close to 10-fold already over last year, and the ice bucket wave shows no signs of receding in the near future.

In case you somehow have managed to miss it, the challenge calls for people to either pour a bucketful of cube-infused water over your head or give $100 to the cause within 24 hours of getting the challenge, and then pass along the challenge to three more people. Given the funds pouring in, I'm guessing most people are both bucketing and donating. I'm pretty sure Bill Gates is:

And, well, just do a search for "ice bucket challenge" on YouTube or check out the Twitter #icebucketchallenge hashtag and you'll see more of this than you could possibly ever want to.

And you probably already have heard the heartbreaking and heartwarming genesis of this nuttiness, which was the brainchild of  29-year-old Beverly, Mass., resident and ALS patient Pete Frates. Frates, a former Division 1 college athlete with Boston College Baseball, began the campaign on Twitter and Facebook and it just took off among sports figures, then to pretty much everyone else.

Whether you think it's stupid (that would be me—we have donated to this cause for years without being challenged to give ourselves a brain-freeze if we didn't) or not (because it's raising a lot of money for the cause) it is obviously very effective.

But what can meeting managers learn from this, you ask?

1. Do not attempt to replicate it! You will only look ham-handed and vulturine if you try to challenge attendees to dump ice water on their head or register for your event/donate to your organization (or all of the above), or something even remotely similar. The main reason this worked was because it came from the heart and soul of an individual who is dedicated to the cause, and has cool friends who could start it rolling. An added plus: It's harmless, unlike other "challenges" that have caught on like wildfire in our social mediacized society (think: cinnamon challenge, which while pointless and dangerous nonetheless was taken up by a ridiculous number of people).

2. Do get to know what your attendees/members/employees care about as deeply as Frates feels about ALS research for a cure. What are the issues that they feel passionate enough about to reach out to their friends, and their friends' friends, and social media in general, to get other people on the bus with it? What are they already doing in Twitterland and on the Facebook frontier? There's nothing you, as an organization, can or should do to start the fire (see point #1), but, as the ALS Foundation and others dedicated to find a cure for Lou Gehrig's Disease have done, make it easier for people to fan the spark into a flaming social (and now mainstream) media sensation.

3. Don't be afraid to look stupid for a cause you believe in—and don't think your attendees will be either. So many times I hear planners say things like, "Our attendees are too professional/serious/respected/dignified to take part in [insert whatever isn't a lecture/standard networking event]." But take a look at those who are partaking in this stunt—I bet you can find some of your attendees among them.

4. Do think about what you could do to encourage your attendees to come up with their own fun and unexpected and silly and shareable things at your meeting or event. Do you give them space, materials, and free time to put them all together? Or even provide some activities that likely will generate shareable moments that have the potential to go viral within your audience's space?

I believe deeply and strongly in the power of meetings to change the world (thanks, MPI, for my new slogan). How can we make that idea go viral?