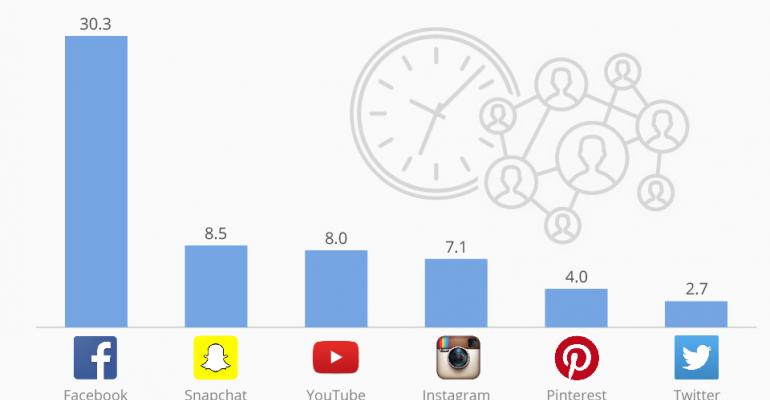 Is Tweeting for Meetings a Thing of the Past?

Twitter may still be the go-to social media channel for a lot of on-site participants at meetings, but is that where meetings professionals should focus their attention? Sure, it's a great way to find out if you need to turn down a thermostat in a breakout room, send flash messages about room changes and new agenda additions, and tweet pithy quotables from keynotes—and of course monitor the Twittersphere conversation around your event while it's happening. As a live-action tool, Twitter is still pretty unbeatable, IMHO.

But Twitter's luster as an overall good tool for expanding a meeting's message may well be fading, according to these numbers from Statista:

Based on recent comScore data, Twitter's user engagement looks to be sliding off a cliff, with the average user spending less than three minutes a day checking Twitter feeds on their mobile devices. In fact, Twitter lags relative newcomer Snapchat, as well as old standbys like YouTube, Instagram, and Pinterest. But the big winner in the social media race—no big surprise here—is Facebook, where the average time spent is more than a half hour per day.

Counterpoint: 10,000 Reasons Why Twitter Will Still Be Awesome in 2016

And now that Mark Zuckerberg has announced Facebook plans to dip its toes into 3D livestreaming and augmented reality, EventMB founder and editor Julius Solaris thinks it will be a real game changer for meetings and events (read more here—fascinating stuff!). Meanwhile, according to Statista, "to make things worse, Twitter’s mobile engagement has been declining for seven straight quarters until the end of 2015 and supposedly continued doing so in the first three months of 2016."

Historically, I haven't been a big fan of Facebook for this particular use—I still view it more as a way to connect with friends and family than with businesses and events—but I'm thinking I need to reconsider. What are the most productive social media channels you use to engage with participants around your meetings?

7 Ways You Can Explode Your Meeting's Instagram Following
Feb 16, 2016