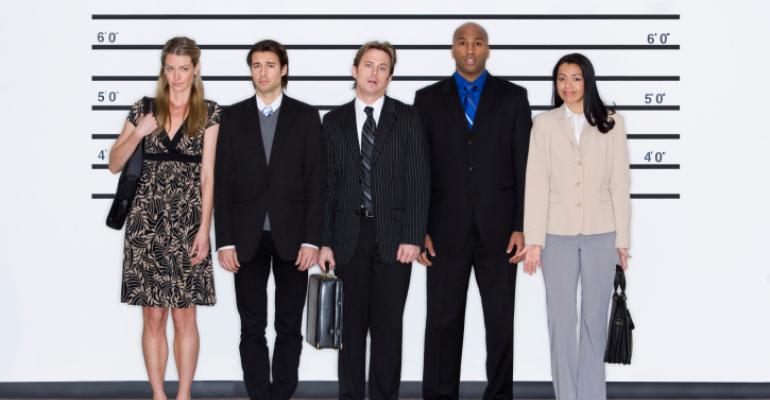 Should "lobby rats" be policed the same as suitcasers and outboarders?

I had a conversation a while back with a friend who wants to participate in some fringe benefits of a professional association meeting, but who doesn't want to pay a registration fee for a meeting whose sessions, keynotes, and networking events she doesn't plan to attend or see any value in. Basically, she wants to go hang out and have interesting discussions with people she knows will be attending the meeting without actually attending the meeting. We struggled a little bit about the ethics—is it wrong to take advantage of all those interesting people being in one place at one time without participating in, and paying for, the event itself? We never did quite come up with an answer, but obviously we both felt uncomfortable enough with it to have that discussion.

Then I read Dave Lutz's recent post on Midcourse Corrections, the Velvet Chainsaw Consulting blog, which had this absolutely unambiguous title: "Ambush Marketing: 4 Ways to Diffuse Conference Scammers." Along with outboarders (company reps who bypass the tradeshow floor and market directly to attendees from elsewhere nearby) and suitcasers (company reps who sell out of a figurative, sometimes literal, suitcase at your show in lieu of buying a booth), he includes as scammers people who do just what my friend was contemplating. In fact, he says that "lobby rats—non-registered folks who hang out in public spaces, hosting a series of meet-ups with your badged attendees"—are a growing problem.

But somehow, these folks' ethical status still seem like more of a gray area to me than the black-and-whiteness of suitcasers and outboarders, who are looking to get financial gains at the meeting organizer's expense. All a lobby rat wants to gain is some good conversations outside of the meeting space—should that be owned by the meeting organizer as well? They're welcome to participate in the event's Twitter hashtag and on other social media, but not to have those conversations face to face?

I'm still struggling with it. I see Dave's point, which is that lobby rats basically are no different than suitcasers and outboarders. As he explains in a comment on his post:

Conference registration fees include education and networking experiences. When one participates in those (including hallway conversations) without following the credentialing requirements, we do believe it is a questionable practice. So, OK to pre-schedule a meet-up with a registrant, but not OK to target badges in the conference hotel or set up an office in the lobby to leverage serendipity.

Well sure, I won't argue that it's wrong to basically set up a competing conference in the lobby, but where do you draw the line? As he points out, being overly strict about it would definitely make the meeting organizer look like a Big Brother wannabe, so policing would be a lot trickier when it comes to non-registered networkers versus those looking to make a sale without paying for the leads.

He offers some really good ideas about how to try to rein in anyone who's trying to benefit—financially, educationally, or in any other way—from your event without paying for it. The most important of which, I believe, is to offer more affordable options.

But I'd go further. Who are these people and why don't they find enough value in the event to pay for it? What can you offer that they would value enough to pay for? It seems to me that, at least for the "lobby rats" (that terms sounds so awful—I like "free-agent learners," which is what meeting consultant Joan Eisenstodt calls them in a comment on Dave's post), meeting organizers are missing the boat. These people are interested enough to want to be in your space with your people—there must be programming that you could offer that they would value enough to pay for.

Could you offer a cheaper one-day "hall pass" that would give them access to just a dedicated networking space? Why aren't your official networking sessions attractive to them (hint: too loud to talk is usually an issue)? Can you offer a different networking track for those who really want to have conversations, versus eating and drinking and dancing with the colleagues they came with? Perhaps offer some unconference sessions so they can set the agenda for more formalized conversations?

I don't know the answers, but I do think it's worth asking why they're doing what they're doing, and how you can work with them to solve the value problem. Granted, some people just want something for nothing and will "ambush" your program for whatever they hope to gain no matter what. Police the heck out of those people. But there are others,  people like my friend, who are long-time, very active and loyal members of the association holding the conference who want to support it, but just can't justify paying the registration fee for a couple of conversations.

Is this a growing problem? Are free-agent learners no different in your book than suitcasers and outboarders? How do you handle them? Are they just learning leeches, or might they be opportunities in disguise? Like I said, I can see both sides on this one. What do you think? Please drop a comment below or e-mail me with your thoughts.