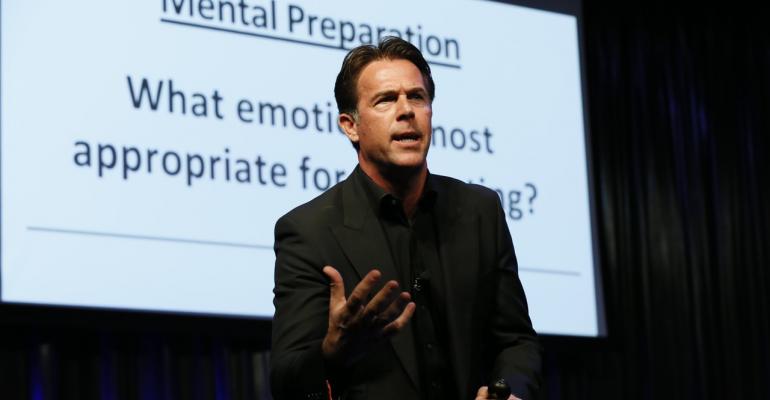 <p>MEETology&#39;s Jonathan Bradshaw at the opening keynote of Smart Monday. Photo courtesy of the IMEX Group</p>

IMEX America 2016: 7 Weird Ways Your Brain Is Wired to Be Social

I’ve been a big fan of Jonathan Bradshaw’s Meetology Minutes, a weekly short video that gives a quick hit of some of the brain science research his company studies, for ages, so I was really excited to have the chance to see him talk about how our brains are wired for social interaction in person. And he did not disappoint! Just a few of the new things I learned from his session:

• When our brains aren’t doing any other specific task, they default to thinking about how we navigate our social worlds. We’re actually wired to be social.

• Being fair to other people feels as good to our brains as eating chocolate (it lights up the same part of the brain, he said). So basically, being fair to others is one way to get that chocolately good feeling without the calories—nice!

• We use external cues to set our emotional states—if we smile, we feel happier, for example. Smells, posture, music, food, exercise, even wearing our “lucky underpants” can affect how we feel. And, of course, how our attendees feel.

• Related point: People are more likely to say “yes” to something when they’ve eaten. He talked about a parole board that started out the morning setting potential parolees free, but by the time lunchtime rolled around and they were starting to feel peckish, they started denying parole in a big way. No wonder we feed people every two to three hours at conferences!

• Beware your unconscious bias. Did you know that you’re less likely to like someone you’re introduced to by someone you don’t like? We need to be aware of the instant judgments we make, even when they’re based on subconscious stimuli, to make the most of our social interactions. Look for similarities, things you share with the other person, to help make connections. It also helps to mirror the other person physically (but don’t get creepy and overdo it, mimicking their every move).

• If someone’s angry or otherwise in a bad mood, don’t follow your instinct to jolly them up immediately. That won’t work, as anyone who has tried to cajole a ticked off colleague could tell you. Instead, he said, join in their negative emotions to start, then lead them to a better emotional place.

• You can make your meeting’s physical space more productive by empowering the audience to have some say in how that space is arranged—he suggested holding an online vote for the opening music, or giving them a choice of seating types. Also, be sure to size your space to the size of your group—it’s hard for people to connect in a big space that’s not filled with other people. Also, windows make us more mentally expansive, and we’re in a better emotional space when the physical space has more curves than sharp angles.

His ending quote was one that should warm the hearts of meeting and event professionals: “As meeting professionals, what you do facilitates what attendees need to do. We are inherently social.”