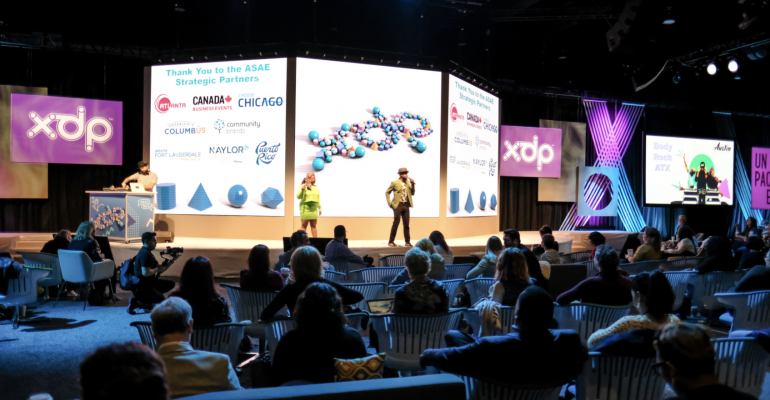 A semi-circle main stage allowed three breakouts to take place simultaneously in the same space, with attendees using headsets to listen to any presenter.
Association Conventions and Expos

It’s hard enough to plan a large annual conference that follows a blueprint from previous years. Now imagine planning a conference by doing the opposite of what's been done in the past to try to make the event more successful.

That's precisely what the American Society of Association Executives did with its third annual Xperience Design Project, held April 11-12 at Gaylord National Resort & Convention Center in National Harbor, Md. Starting with the marketing effort and extending into how event space was used and content was presented, ASAE took very different approaches this year, and found a receptive audience: More than 1,650 people attended, up from just over 1,500 last year. Even better, nearly 1,000 were executive-level attendees, versus just 571 in 2018.

The event's first change was introduced at ASAE's annual conference and exhibition in August 2018 in Chicago, when CEO John H. Graham announced during the opening general session that the April 2019 XDP would offer a "pay what you think it's worth" approach for those who registered by November 30. According to Krista LeZotte, CMP, CSEP, associate director of meeting operations & special events, a typical ASAE multi-day conference runs about $1,000, while the suggested registration fee for XDP was just $295. Even so, "people could sign up ahead of time at no cost, and then determine how much they wanted to pay after attending the show. The result was that we got different types of people to register who otherwise would not have thought about attending XDP, which makes the show more dynamic when they come together with repeat attendees. We made sure to stay in touch with potential first-timers ahead of the event so that they would follow through."

Another result of the offer was more informative post-event evaluations. LeZotte notes that the evaluation first presented to attendees the specific benefits the association tried to deliver, and placed a value on each element. Then, attendees were asked if they received those benefits, and to detail other positive outcomes. At the end, attendees were asked if they wanted to pay the suggested conference fee of $295, or a higher amount based on the value the received, or some lesser amount either based on the perceived value or because their organization did not provide the full conference fee. "Asking people for specifics on which benefits they gained and why they were paying the amount they chose got us very valuable information," she says.

Of the attendees who opted to register in advance for the "pay what you feel" offer, 70 percent paid something; of those, 51 percent paid $295 or more, while 49 percent paid less. One mitigating factor for those who paid less than $295 or nothing at all: "Many of them cited that they could not get the suggested amount from their company, not that they were dissatisfied with the event," LeZotte says. "And we had more than a few attendees who opted to pay more than the suggested fee." ASAE is presently considering whether to use this pricing option again in 2020.

Swapping Spaces for Maximum Effect
With a name like Xperience Design Project, the event's main purpose is "to demonstrate how to use space in different ways to create the most stimulating environment for attendees," LeZotte says. In the show's first two years, the way the association reached that objective was to deliver a wide variety of session formats. But this year, ASAE's planning team took a much bigger step in order to show attendees that any type of space can be used for almost any purpose.

While the National Gaylord has sufficient space for XDP's needs, LeZotte and her team made a strong impression on attendees by doing things the hard way: using the exhibit hall for most of the educational offerings, and using the property's main ballroom for the "business exchange" hours where attendees network with suppliers at tabletop stands.

In the exhibit hall on the lower level of the property, XDP's general sessions and "Idea Xcelerator" breakouts took place. Using a semi-circle main stage allowed LeZotte to keep attendees in that same space for all breakouts after each day's general session. How? "We put three presenters on the stage at one time in different zones, and attendees had headsets that could be tuned to hear any of the presenters," she says. "They could move closer to their preferred presenter if they wanted, but they didn't have to. And they could change the audio channel if they wanted to take in parts of each session."

On day two, the breakouts for the "Xperience Xcelerator" track were set in other nontraditional session spaces. For instance, several foyer areas with natural light were converted to breakout spaces, featuring banquet chairs, highboy stools, and couches—almost all of which came from the property's inventory, not rental companies. "As long as you give a property enough time to coordinate, it can often accommodate your furniture needs for breakout setups so you don't spend much with outside vendors," LeZotte says. "We wanted to demonstrate that to attendees."

The most striking venue for this breakout track, however, was the Capital Wheel: a 180-foot-high ferris wheel set on the riverfront below the resort, featuring enclosed cars that hold up to eight people. There, attendees could select from a variety of discussion topics and then step into a car with other attendees for a 20-minute ride and conversation. Attendees could take in a few different discussions in the allotted time frame.

For the business exchange, held in one of the ballrooms rather than in the exhibit space, suppliers had a presence defined by sponsorship level: designer, creator, or activator. First, "we made sure the interactions were not simply at tabletops or booths," LeZotte says. "We created a lot of lounge spaces where people could sit and do business." What's more, for exhibitors at the creator level, "we paired them with some fun F&B experiences alongisde their space, rather than have lunch be in a separate area." For instance, one exhibitor had a "pick your Prosecco" wine-education and -tasting station; another had a "make your own spice rub" station so attendees could apply custom creations to their dishes; and another had a "build your own tater tot" bar. This way, "people could eat and drink their way around the floor and have easy conversation starters with exhibitors they might not know anything about," LeZotte says.

At the activator level, ASAE offered exhibitors a choice of several entertainment experiences to engage attendees. Options ranged from a brainwave art station—"where they use your own brainwaves to create a design on paper," LeZotte notes—to an essential-oil­-mixing station that helped attendees identify the specific scents that most relaxed them.

Final Takeaways
One major benefit of flipping the educational and networking spaces is that "it can create a spark at your event that makes the show feel different to repeat attendees," LeZotte says. "People told us that the business exchange in particular felt much more energized than in past years because the flow was different and there was natural light. It really changed people's perception of that part of the event."

Further, for shows that have multi-year contracts with a property—XDP will take place at Gaylord National for the fourth consecutive year in May 2020—swapping the space each year can make it seem like a different venue altogether.