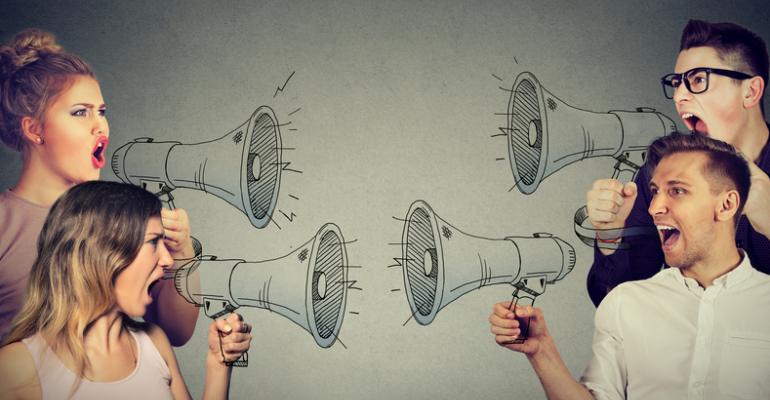 Why one association exec says there’s a time and a place for engaging in politics—but it’s not at meetings.

Every association member is entitled to his or her opinion, but translating those passions into why an association should “do this” or “speak out against that” is dangerous territory that steers associations away from their core mission, says Rick Harris, executive director of the Association of Proposal Management Professionals. Instead, he says, associations should position themselves as “Switzerland,” keeping their meetings neutral, politics-free zones.

MeetingsNet recently caught up with Harris to ask him to elaborate.

Why is this something that you feel the need to talk about now?
The most recent election cycle has encouraged everyone to feel free to share their opinions, whether on Facebook or LinkedIn or at their association’s meeting. Everyone seems to have a cause, which is fine, but when they bring their causes into the conference ballroom, it can derail the topic under discussion. For example, at a recent industry event, an audience member noted that the panel was predominantly male and there should be more female speakers. There was this gotcha moment, and then the person went off on a tangent about how we need to advocate for equal pay in the industry, which is not what the panel was discussing. Politicizing just throws a grenade into the conversation—it’s just not good business for speakers, business, the association, or our meetings.

Every report or survey that we put out, every topic we discuss at a meeting, people ask why we’re not advocating for this side or the other. We’re seeing this need to politicize everything just explode over the past two years. Our culture now seems to want to introduce opinions for the purpose of inciting and inflaming people. I say associations need to check that at the door.

Other than taking sessions off on a tangent, why is it bad policy to let politics play out in meetings?
When you politicize an event, you’re asking the association to take a stand, when it represents people of all backgrounds, religions, ethnicities, and political views. It’s not fair to ask the association to take a stand on social political issues. Trade groups and professional societies aren’t equipped to undo all these social ills. They’re equipped to represent the people in their membership and at their meetings, and it’s their job to make sure everyone feels welcome and comfortable.

Polarizing discussions are barriers to business, to successful meetings, and to growing an association. They divide the association and the meeting instead of bringing people together.

Has your organization had any experience with member politics affecting its meetings?
Just this past year, we had a member ask us to move our annual meeting out of California because it has been deemed by its governor to be a sanctuary state. This didn’t agree with that person’s political view, so that person insisted that we should relocate the meeting. I took it to the board level to discuss. I said, “Folks, is this a good business idea or not?” In that context, it quickly was decided it would be a good idea to stay in California and honor our contract.

Let’s leave the political discourse to Fox News and CNN and MSNBC instead of clogging our boards and meetings with topics that don’t have much to do with our association or our member’s professional needs.

What if something in the political realm is directly impeding your members' ability to do their jobs?

That’s where it makes sense to take a political stance. There are a number of associations—ours included—that are allowed to lobby government on behalf of our members. If there were a tax, say, put on proposals, we would be one of the first to say that tax is a poor idea and provide the business reasons why.

We would remove the emotion and advocate for our members and our industry. That’s fine. It’s easy to separate the political issues that affect our business from personal political issues. It’s not business issues that are flaring up—those are usually talked about in a businesslike and methodical way. It’s these others that are more on the personal side—whether they’re liberal, conservative, independent, libertarian, whatever—that folks are bringing into the meeting.

How are you going about returning to “Switzerland” status, being a neutral place for your members?
We’re tamping it down by reminding our members why we exist. We’ve called on our board and our members to think more about our professional goals and not about political stances or projects. Associations need to go back to their core mission, and that of their membership. What are they at the meeting to do? When people bring their personal advocacy roles into these arenas, ultimately it hurts our meetings because it throws us off our goals as a group, which is to learn how to be better at our professions.

Do you agree? Disagree? Please share your thoughts in the comments below or via email to [email protected]

How to Make Letters of Intent Less Ambiguous
Nov 18, 2021