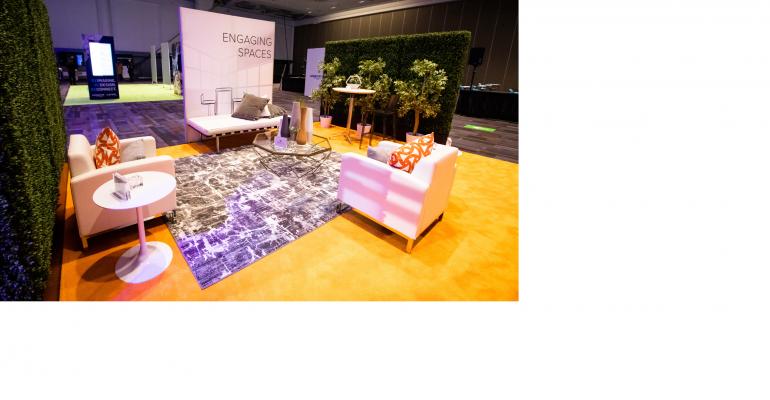 A sample exhibitor's layout on display during the ReDesign event at Vancouver Convention Centre.
Association Conventions and Expos

The New Era of Show-Floor Design

Wider aisles, a mix of open and segmented booths, and video-augmented encounters are some of the elements that will be used throughout 2021 and possibly longer.

With the news that all Americans could be vaccinated by the end of May, the meetings and events industry is preparing for the possibility of holding sizable in-person business events as soon as July. Case in point: Houston has 19 citywide conventions booked for the coming July-December period, compared to just 12 citywides that took place over that period in 2019.

What will help to get events moving again is the fact that meeting venues and show companies have been busy redesigning event spaces for the post-pandemic landscape ever since in-person meetings went on hiatus in March 2020. One example comes from the Vancouver Convention Centre, which recently held an event called ReDesign to demonstrate new show-floor designs in conjunction with Canada-based Levy Show Service. The event allowed a few dozen meeting planners from Western Canada to come on site to view the show-floor set-ups in person, while others could watch parts of the event online.

What They're Seeing
David Hay, director of sales and business development for Levy, says that one constant his company has seen during its global research of new designs is a widening of trade-show aisles. Organizations are expanding them from 12 feet to 18 feet for side aisles with a one-way traffic flow, and to 24 feet for central aisles that allow two-way traffic flow. Also, “instead of having 90 feet of booths before aisles intersect, you have only 45 feet between intersections to give people better visibility for keeping their distance from others. It’s also a good idea for the poster-session areas at medical shows because it gives each small group of doctors at a station a bit more distancing space.” 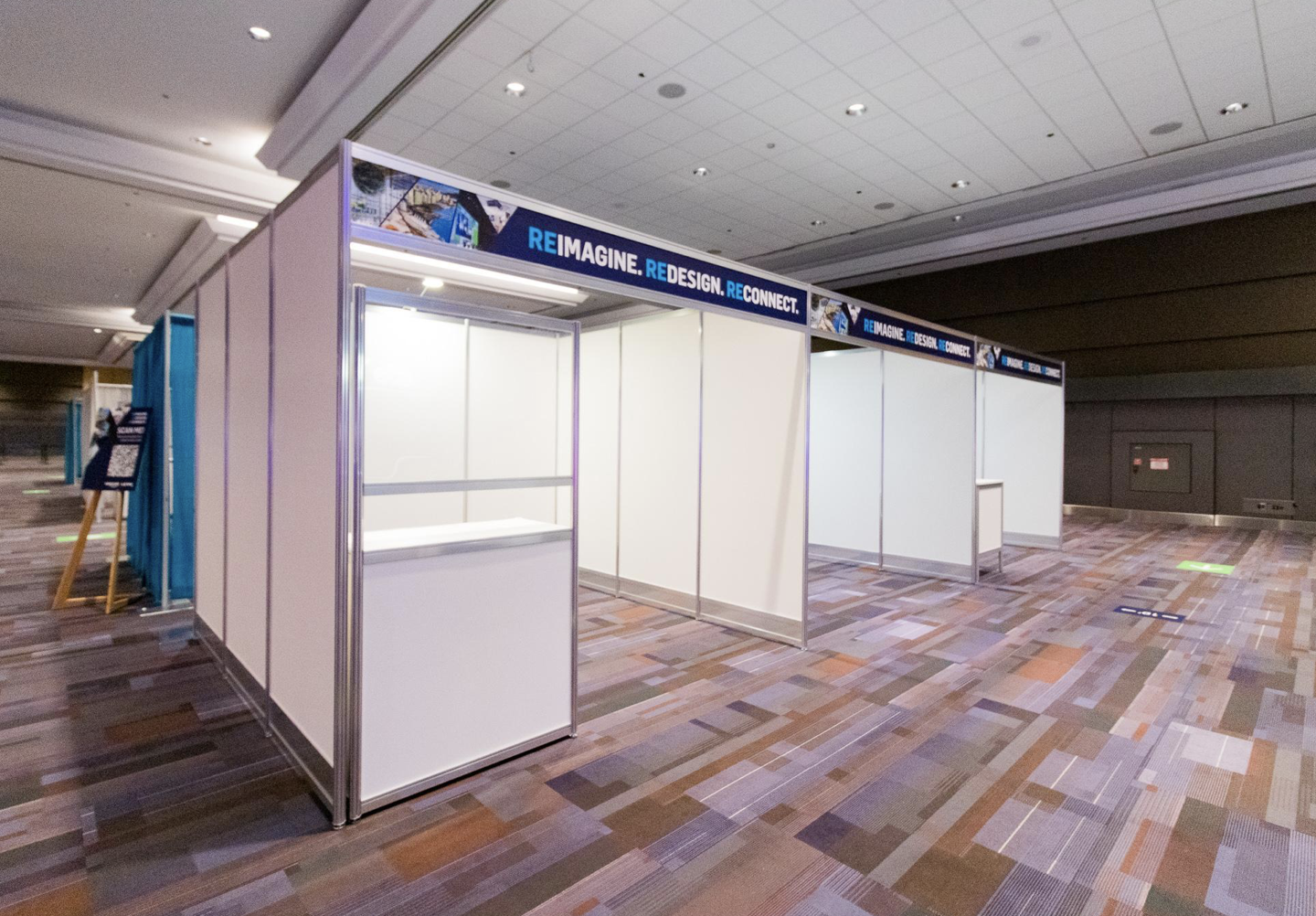 As for individual booths, one design idea being considered is “moving away from the popular North American design of a high back wall but low sidewalls that allow diagonal visibility into a booth,” says Hay. Instead, “we’re moving towards the European ‘marketplace’ booth style with full-height side walls and drapes or a shell scheme. It gives attendees peripheral safety by stepping into a booth to be around only one person who is masked and behind a plexiglass divider.”

One alternative design: Having no booth adjacent to any other, which would allow exhibitors to have an open layout that features enough space for social distancing without the need for plexiglass shields. In addition, this would allow show management to better observe the happenings across the exhibit floor and ensure safe behavior among all participants. 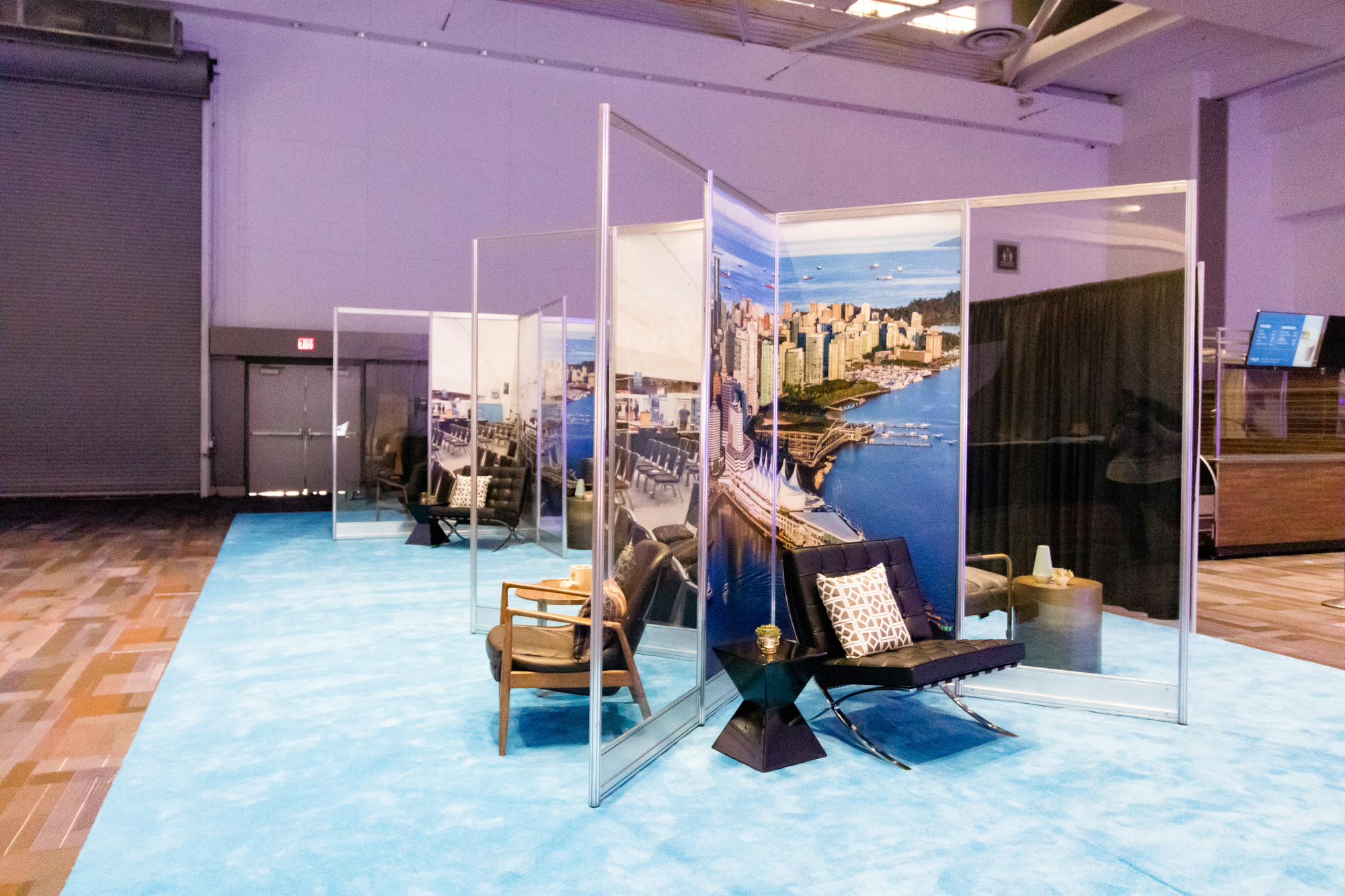 Technology Comes into Play
For industries that have a lot of hands-on product interaction or touchscreens in show booths, the use of disposable gloves is an easy way to let that continue. But when it comes to having detailed conversations between two masked people separated by plexiglass, the quality of interaction is still compromised.

However, the use of videoconferencing to remotely connect booth visitors with an exhibitor’s product experts or executives is an idea that’s gaining traction. “Attendees can get access to knowledge they wouldn't normally be able to get in a typical booth conversation, and the company’s experts don’t need to travel to a show to participate,” notes Adam Radziminski, director of events at the Vancouver Convention Centre. “It can also be a great learning session for local reps to experience those conversations while in the booth.”

With Cat-5 fiber-optic backbones in place at most convention centers, the amount of bandwidth needed for simple videoconferencing in booths is typically available. Alternatively, exhibitors could procure their own Wi-Fi hotspots.

F&B: Serving and Spacing Challenges
At the Indiana Convention Center and adjacent Lucas Oil Stadium, Josh Vaught is working with his convention service managers to reconfigure the exhibit floor, accounting for the additional space needed to execute the food and beverage function in various places. “There simply needs to be fewer booths than in the past in the areas around foodservice,” says Vaught, the director of catering for the two facilities.

With permanent concession stands, “we’re cordoning off more space around them to create customer lines where people can feel safe.” Also, most items—even hot items such as chicken tenders and hot dogs—are made a few minutes ahead of time and wrapped so there is no handling of each item. Condiments and utensils also come in single-use packaging.

At checkout, “all of our cashiers are wearing masks and gloves and have clear-glass barriers separating them from the guests,” Vaught says. “We also installed a new point-of-sale system that accepts all forms of payment: debit and credit through cards, as well as Apple Pay, Google Pay, and others using their phone. We're trying to make everything about payment touchless” by allowing guests to hold their card or phone over the electronic reader.

As for pop-up concession stands and buffets with dedicated seating areas at one end of a show floor, “they’re no longer self-serve,” notes Vaught. “We have servers behind clear glass and wearing gloves, and they are the only ones to touch a serving utensil.” Alternatively, “we’re also doing things like bento boxes with a few appetizers already packaged in them. This not only gets people to spend less time in line and have fewer points of contact, but it allows for more sponsorship opportunities on the packaging.”

With tables and seating, the typical 10-person round will only have four chairs around it for the foreseeable future, Vaught says. And “facility staff is coming to a table once someone leaves to sanitize that space for the next person. We're also getting away from using tablecloths because that makes it easier for us to spray and clean the surface guests are using.”