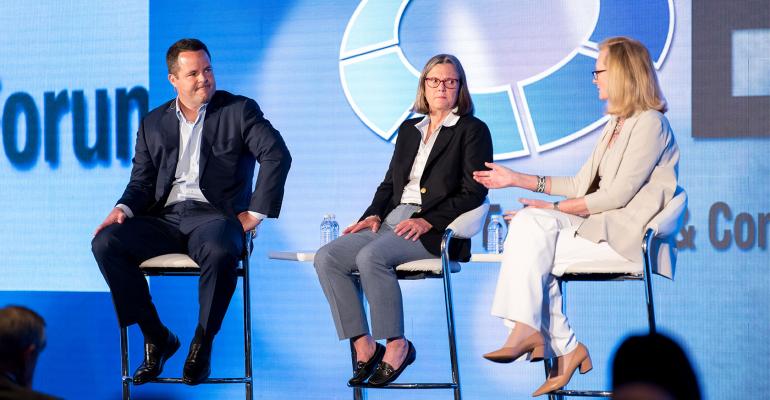 Inside the Deal to Sell the National Restaurant Association Exposition

Here’s how the NRA and Winsight structured the sale of the 100-year-old show.

Last November, the news broke: The National Restaurant Association had sold its annual conference and exhibition. With 100 years of history and 65,000 attendees, the largest gathering of foodservice professionals in the world was now in the hands of media and events company Winsight. What was the NRA thinking?

At the Exhibition & Convention Executives Forum on May 29 in Washington, D.C., that question went directly to three panelists who could answer it best: NRA President and CEO Dawn Sweeney, Winsight CEO Mike Wood, and Mary Pat Heftman, the former executive vice president of convention and strategic alliances for NRA and current president of the Restaurant Show Group at Winsight Exhibitions. Just a week after the close of the first show under new ownership, the trio explained the reasoning behind the sale and outlined the unique structure of the deal to a rapt audience at ECEF.

The “why” of the agreement between the two organizations reflects the rapid pace of change in today’s exhibitions industry. Heftman pointed to the increasing importance of digital transformation to drive personalization and customization of the convention experience for both exhibitors and attendees. “We did have content, great data, and some digital tools, but we would have had to evolve pretty dramatically,” she said. “The ability to do that at the speed that I felt we needed to in order to keep the trajectory going was going to be really difficult over the coming years. I didn't want to put us behind the eight ball.”

Even before the deal with Winsight was on the table, Heftman felt the NRA show “needed to act more like a media company to be relevant for the future and to grow at a continued pace.”  And as the association was coming up on its 100th anniversary, it was hard not to look toward the future. “For the long term, for the next generations, the best thing for the show for the business and the association was to take on this partnership,” Heftman said.

Let the Negotiations Begin
There were three main components to the deal between Winsight and the NRA. Part one was making the NRA a minority stakeholder in the Chicago-based media company, with an advisory seat on its board of directors. “We wanted the association to be a true partner. And so, we accepted and agreed to an equity partnership early on, whereby the association would continue to benefit from the growth of the show but also from the broader organization,” explained Wood. Part two, he said, addressed the question of how the association would replace the revenue it earned from the show each year. “And there we came up with a mix of cash and a seller note, a financing vehicle,” Wood said. “The association actually became a lender to us to get the deal done.”

That unusual approach worked for two reasons, Wood said. The NRA had confidence in the show’s sustainability and growth prospects, as well as the actual value of the note, which “not only generated a return for them that they were used to but added almost twice as much on an annual basis that went back to the association,” Wood said. “The seller financing component allowed us to accomplish the goal of replacing the income that the show had historically generated for the association as well as creating a long-term annuity fund, such that the association could operate in perpetuity without having to worry about the performance of the show.”

The third part of the deal was a 45-year sponsorship agreement between the association and the show that allows the NRA to have influence over the look and feel of the event, including branding, content, and marketing. “I was very bullish on the sponsorship piece and the continued partnership with the association,” says Heftman. “In my tenure in the trade show business, I've seen a number of shows that have stalled and really lost the DNA of the association and the real association commitment.” The sponsorship agreement, Wood says, “is a working, breathing document that allows us to continue to engage at a partnership level and allows the association to participate in the planning and execution of the event.” That said, operational control resides with Winsight. “My entire team, the entire trade show staff, moved over to Winsight,” says Mary Pat Heftman. “We're a division of Winsight with full operational ownership.”

NRA President and CEO Dawn Sweeney says the deal resulted from “a very creative series of decisions. ... Mike was very interested and driven by what we wanted to achieve as opposed to coming in with, ‘Here's what we've got, are you interested?’” Sweeney worked with a small task force to negotiate with Winsight, and she said both sides were open to exploring new ideas. “I think it was the combination of those two levels of entrepreneurial energy that allowed us to create something that neither of us could exactly envision when we started, but it feels very right at this juncture.”

With their first conference collaboration now complete, Sweeney is feeling confident about the future. “MaryPat has set a trajectory for many, many years that the next show is going to be better than the last,” she said. “2019 was very much on that trajectory. It was better; it was stronger; the energy was really strong, and I don't think the general population of 65,000 people were focused on the fact that this was now operationally owned by Winsight because it felt very much integrated. But it felt better, and it's going to continue to feel better as we build that partnership and alignment going forward.”