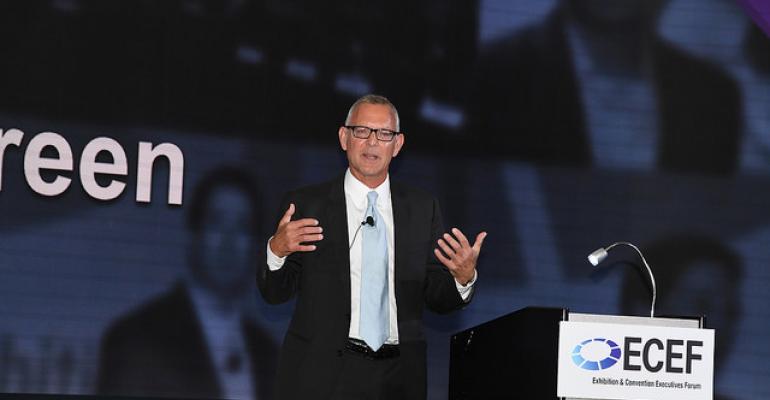 The Big Benefits of Being the World’s Worst Negotiator

How one exec has led his association’s show portfolio, revenues, and membership on a dizzying upward spiral by giving away the store.

It’s only been two years since John Barrett left the Fortune 100 world for what he calls “the glamor and excitement of trade show management,” but he wasted no time disrupting pretty much everything when he became the executive director of ISSA—a global association for the cleaning industry in 2016. The result: The association has increased membership from roughly 7,000 member companies to over 9,000, expanded its presence from 79 countries to 103, grown its revenues by 30 percent and net assets by 50 percent, and increased staff from 36 to 75 employees.

How did ISSA do it? As Barrett told the audience at ECEF 2018 in May, it entailed breaking up a historically profitable partnership; breaking free of an addiction to ISSA’s cash cow, its North American trade show; and being what he calls “the world’s worst negotiator” in a giant merger-and-acquisition spree to bring a bunch of new entities, and their shows, under the ISSA umbrella.

Breaking Up Is Hard to Do
The rationale with ISSA’s partnership with RAI Amsterdam was sound when it was created, he told the audience. For more than 20 years, their joint show in The Netherlands made for easy-to-harvest profits. “RAI was the show organizer; all we had to do was fill up an American pavilion and kiss some babies,” he said, adding that they also shared two smaller, yet promising, shows in Istanbul and Mexico.

Aside from the obvious financial benefits, the partnership allowed ISSA to “stake out this territory and discourage the competition,” he added. “And it worked for a while. But as the years wore on we were finding that the partnership was getting in the way of our plans to reshape our future.” The biggest hurdle was the partnership’s broad, mutual non-compete, which was hamstringing ISSA’s ability to grow its portfolio, something that research told them they had to do to help their members thrive in the chaos and disorientation of today’s economy.

“We broke up in a rather public way, and there were some harsh words, but in the end, we found our peace,” said Barrett. After public vilification on ISSA’s part and a threat of injunction in the Dutch courts on RAI’s, “We got to the table in a compromising mood, and we found a way to partner by being apart.” ISSA held onto the Mexico show, RAI got the Istanbul show, and the dust finally settled. “The door is open for future cooperation; we are more than friendly today.”

Good to Grow
ISSA is a mission-driven organization, “and ours is to change the way the world views cleaning, to elevate this humble profession and help the people and firms that every day keep and preserve the health of the human public,” he said. “I had an even more personal agenda: To not screw it up on my watch.”

The organization was already successful when Barrett inherited it, with cash in the bank and a great staff, he said. But ISSA also was “addicted to the cash generated by a single event, our big North American trade show.” Freed from the constraints of the RAI partnership, ISSA was able to embark on a mergers and acquisitions spree. Not only would this help the organization better serve its members, it’s also pretty good for the bottom line. As he noted, “New events serve as a platform for our other programs, such as training, certification, and membership. And trade shows are pretty good value creators in and of themselves.”

ISSA merged other trade associations into itself, and also acquired for-profit trade publications and shows to help amplify its voice in key segments of the cleaning community. “The main focus of our strategy was to get new events under our umbrella, whether they were for-profit events or not,” said Barrett.

The long list of mergers and acquisitions includes a world-renowned training institute, publication, and daily news feed targeted to the cleaning industry’s end users; a magazine that served the carpet cleaning and restoration industry; an association of residential cleaning contractors; a benchmarking entity; a Hong Kong–based training and certification institute; and associations and trade shows serving communities from Australia to South Africa. Along the way they also picked up a 501(c)(3) organization called Cleaning for a Reason—“Our foundation got into the act on this one”—that provides free home cleaning for cancer victims. A media darling, “It brings a positive focus for our industry,” he said.

While many of the shows ISSA is adding are smaller events that most large trade show companies wouldn’t bat an eye at, they’re the right choice, Barrett said. “We never forget our mission of changing the way the world views cleaning, and each provides the potential to fulfill our mission on a vastly accelerated basis,” said Barrett.

Bad Negotiating Is Good for Business
ISSA’s proposition to its new partners, which for the most part are doing OK but not setting the world on fire, is pretty seductive, he said.

If they have money in the bank, they keep that too, he added. “Any money we earn together stays in the partnership, we never take it out unless we both agree to do so.” In many cases, ISSA doesn’t own the entire event—but it never takes less than 50 percent. “That’s really important.”

ISSA hasn’t done a lot with the big independents. Yet. But the cooperation can take many forms—co-location, new events, etc., and Barrett said he’s “absolutely sure that we will,” inviting any in the audience who might be interested to “swipe right” and get in touch.

Leaping Hurdles
Of course, all this M&A action doesn’t come without its challenges. In ISSA’s case, these include:

• Earning the trust of the potential acquisition’s existing ownership. “Trust takes time. Each deal is custom; the specific goals and key metrics for the partnership must be negotiated.” One thing that helps improve the conversion rate is testimonials from current partners about the benefits they’ve gained.

•  Bringing new entities into the fold gently. “The trouble with sending out edicts and forcing compliance is that it not only crushes the spirit of the new entity, but it turns me into a liar because I promised them autonomy.” The process ISSA has developed starts and ends with the needs of the merged organization, Barrett said.

• Getting staff to embrace new people and new markets. ISSA staff needs to understand that the new markets “are truly part of us and that we are there to serve them, that they are not here to serve us.”

• Inflating intangible assets. “I regularly fight our auditors on this,” said Barrett. While placing value on cash and property are relatively easy, intangibles like brands, member lists, and good will are more difficult to put a number on. “We were able to argue successfully that not only is there an absence of materiality in these transactions, but artificially inflating value to the intangibles served to distort our balance sheet.”

• The interminable time lag. “The final frustration is how significant the lag is between the time an opportunity arises and the time it takes to actually do something in this industry,” said Barrett. “We call it ‘association speed.’” Instead of doing the deals sequentially, ISSA opened up several fronts simultaneously and learned as it went. “We determined fairly early on that we can’t let tradition, much less accountants, lawyers, or regulators, dictate the rate of change in our industry. Neither should you.”

Bringing Reimagination Home
The changes ISSA has been going through is not all about M&A, he added. “We also wanted to shake things up at home.” Among the internal programs being reimagined are lobbying efforts, ISSA’s Young Executives Society, and even its board composition. But ISSA is making the biggest change to that beloved cash cow, its 16,000-attendee ISSA Show North America, relaunching October 29–November 1 in Dallas, where the show hasn’t been for 15 years. While the dependence on that cash cow is now mitigated by new trade shows and a bevy of other workshops, conferences, and trainings—the North American trade show is now only 42 percent of ISSA’s combined revenue, down from nearly 70 percent in 2016—the venerable event needed some updating love, he said.

“We’re replacing a bunch of stuffy, invitation-only events with wide-open, everyone-included parties,” said Barrett. Among them are an ISSA Foundation fundraising event at Topgolf Dallas, the proceeds of which will benefit Cleaning for a Reason. Capital markets have rediscovered our industry and tons of money is going into development of technology and advanced research, and as such there’s a lot of innovation in the cleaning industry. The final day includes a fireside chat with President George W. Bush, handing out the Innovation of the Year Award, and a blowout Backlot Bash block party.

ISSA was nearly 100 years old when Barrett came on board, and it had been doing well. But, he said, “Through extensive research and focus groups, we knew that if we hoped to be around for another 100 years, if we were going to continue to matter to our members and serve our mission to own the global cleaning community, we had to grow.” Stay tuned.