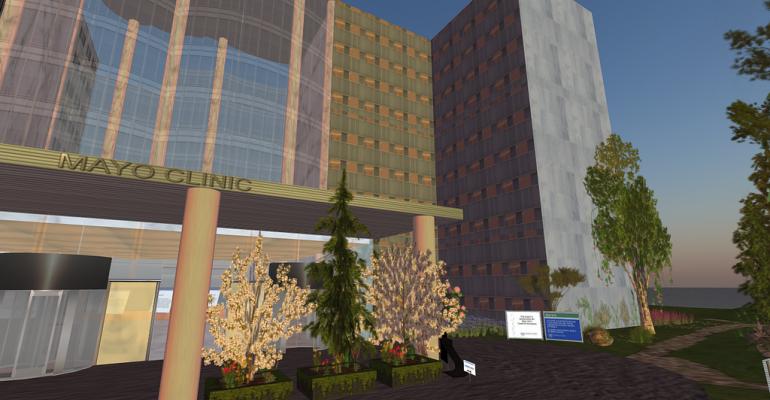 You can’t innovate in a box,” says Francesca Ripple, public affairs communications manager at Mayo Clinic. While the Mayo Clinic Innovation Center’s annual fall Transform event does take place in a box of sorts—the Mayo Civic Center in downtown Rochester, Minn.—this year organizers added the ON24 platform to expand its global reach and allow them to weave social media into the fabric of the event. This is in addition to livestreaming Transform via a legacy streaming solution and running a parallel program in virtual world Second Life, which the conference has done since its public premier in 2009.

Exploring topics including new models of care delivery, change in the healthcare landscape, the intersection of business and healthcare innovation, and how to scale programs to large populations, the goal of the meeting is nothing short of transforming how healthcare is experienced and delivered. Its reach has to be broad, its audience diverse, and the way the content shared should vary to accommodate as many preferences as possible, says Ripple.
And reach people they did. There were 850 people participating on-site; 600 in Second Life, where Mayo has its own virtual conference facility; and 2,700 viewed the live webstream, leaving 5,300 video impressions. The social media component generated almost 5,000 tweets. It was, says Ripple, the largest global reach the conference has experienced to date.

Expanding Channels On Site
The powerful agenda that drove the 2013 conference featured physicians, sure, but it also included artists, design and social innovation professors, design consultants, insurance leaders, architects—anyone who could bring new thoughts to improving healthcare. All were encouraged to interact with the audience. Transform was moderated by journalist and commentator John Hockenberry, who also worked with the organizers to bring the virtual audience into the physical space by mentioning what they were buzzing about and making sure their questions were heard.

Online via Webcast
One “beautiful thing” about adding the ON24 platform, says Ripple, is that when the legacy system went down at the beginning of the conference, they could tweet to let virtual attendees know they could switch to the ON24 channel. She also credits the ON24 platform’s ability to integrate social media for the record Twitter activity around the 2013 conference.

The only disappointment was that Mayo was unable to generate any revenue from its newest online avenue. “We had hoped that by offering the ON24 component for a really low fee—$89, when the on-site conference fee was $950—it would be a no-brainer to sign up 1,000 people.” But, with less then the target number registered by the week leading up to the conference, Mayo decided to offer it for free instead. “We want to share Mayo Clinic’s expertise and what we learn with the world, so it really wasn’t a hard decision to make,” she adds.

Virtually in Second Life
Mayo’s virtual 3D conference facility in Second Life was buzzing during Transform, says Brian Kaihoi, Mayo’s Web coordinator and SL specialist. Unlike with the webstream, getting existing Second Life users to attend doesn’t require anything more than letting them know about the conference. Once people join Second Life, create avatars, and begin to literally live another existence in the virtual world for educational, social, health and business reasons, they’re very attuned to what’s happening in the areas they frequent—and they frequent those areas all the time, he says.

Kaihoi asked people he knows who are involved in Second Life academic, patient, and engineering groups—anyone who might touch healthcare—to host their virtual peer groups in SL throughout the conference. Once the hosts were in place, all he had to do was post a notice about what was happening, where, and when, and he knew from past experiences that the audience would appear.

“The virtual world experience we were running in SL paralleled everything that was happening in other channels,” says Kaihoi, from Q&As and group discussions to thousands of comments flying back and forth throughout the symposium.

Online Forum
To keep the conversation going, Transform’s organizers have developed a digital forum with podcasts and other content related to the conference. Almost 300 new participants joined the online forum during this year’s conference; the group now numbers around 400, and Ripple expects some of the clinic’s 1,500 or so Facebook and Twitter followers also will want to join the ongoing forum discussions.