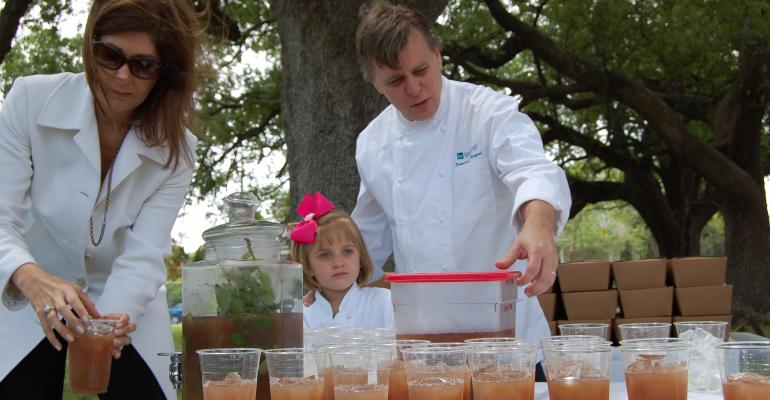 <p> New Orleans chef Dominique Macquet, serving mint-infused iced tea with his wife Wendy and daughter Nadya at a local event, will be one of the experts participating in the Morial&#39;s Farm to Table symposium.</p>
Association Conventions and Expos

Convention centers are often considered loss leaders—investments designed to generate room nights for the city, not necessarily turn a profit. But in some destinations that role is being redefined as facility managers look to boost revenues by launching their own events and hosting nontraditional shows, like concerts and comedy acts.

“This is what we believe is the start of a trend,” says Tim Hemphill, vice president, sales and marketing at the Ernest N. Morial Convention Center in New Orleans, which in recent years has gotten into the business of producing its own events.

While it’s fairly common in Europe, the concept of convention centers producing their own shows is still rare in the U.S. But today’s economic realties are forcing facility managers to consider new revenue streams.

“There’s more supply of meeting and exhibition space than there is demand for it so that makes for a very competitive market,” Hemphill says.  “On top of that, state and municipal budgets are really in a hard way.” The loss leaders of the past, often supported by general fund money, are under more pressure to generate revenues and reduce budget deficits. “We, the convention center industry, have to be a lot more entrepreneurial than we ever have been before—producing our own shows and placing that business in need periods,” says Hemphill.

The Morial Convention Center owns and produces two shows—the International Disaster Conference and Expo, now in its third year, and the Farm to Table International Symposium, which launches in August.

The facility introduced the IDCE in 2011, working in partnership with Atlanta-based Imago Trade Shows, which had produced a disaster-themed conference at the Morial two years earlier. The previous event was not as successful as anticipated, but facility management thought it had great potential so they partnered with Imago to re-engineer the show as IDCE. The re-launch went so well that the next year the Morial bought the show outright and hired the president of Imago, Jimmy Mouton, to run it as head of a new Trade Shows and Conferences Department at the convention center. Mouton and his team produce two internal shows as well as assist meeting clients with their show needs. The long-term goal of bringing in Mouton was to develop more shows and make this department a revenue center. “We need to generate revenue for the building because revenue from space rental is getting harder and harder to come by,” explains Hemphill. The shows are also creating hotel room nights for the destination in need periods.

IDCE has grown from about 1,000 attendees in the first year to about 2,000 attendees and 200 exhibitors for the 2013 conference held this past January. It’s already showing a profit, says Mouton. The 2014 show is expected to double to 4,000 attendees spurred by new partnerships with other associations and government entities.

Growing the Portfolio of Events

The Morial’s Farm to Table International Symposium, August 2–4, is being produced in partnership with the Southern Food and Beverage Institute, which will provide content and other resources. The symposium explores of one of the hottest trends in the food and beverage industry—the cultivation, distribution, and consumption of locally sourced food. The conference will be held in tandem with the Louisiana Restaurant Association’s Foodservice and Hospitality Expo, August 3-5, a Morial staple. In addition to producing the symposium, Mouton and his department are partnering with the LRA on expo and sponsorship sales. Symposium attendees will also be able to visit the LRA trade show floor. Mouton is expecting about 1,500 attendees for the inaugural F2TI Symposium. “The feedback we have been getting so far is very positive—it has a lot of momentum,” says Mouton.

These two events are the first of what the Morial staff hopes is many more. “Our goal is to grow the portfolio and become a formidable event group,” says Mouton. The key to developing new events is to not compete with clients, but complement them, as is the case with the LRA, or tap into under-served and relevant niches. Disaster preparation and food and beverage are two very hot topics that are particularly relevant in New Orleans—and there’s an abundance of interest, experience, and expertise in these areas locally. At the same time, the shows filled a need within their respective industries.

Management at the Las Cruces Convention Center is also producing its own shows, but has taken revenue generation even further than that—the entertainment business. In recent months, the three-year old facility has booked comedians Mike Epps and Tommy Chong, a mixed martial arts match, rocker Tommy Lee, and other events, explains David Hicks, general manager at Las Cruces Convention Center, which is managed by Global Spectrum.

The traditional stream of meetings, conventions, trade shows, and banquets only fill so many dates on the calendar, says Hicks. With the budget pressures cities are under to reduce deficits, center management decided to go out and proactively look for more revenue. The key was to find a comfortable niche within the Las Cruces entertainment market, explains Hicks. Particularly, they sought out events that were too small for an arena but too big for a club—comedy acts, concerts, mixed martial arts, boxing etc. They then found some promoters and began booking events on open dates. They are short-term bookings, usually within 6 months, so they are not filling dates that would go to conventions. The events, which take place in the 14,500-square-foot exhibit hall, have been “wildly successful,” says Hicks. Lee brought in about 1,400 people, while Chong attracted 1,000, and Epps about 600. Management is now actively working with promoters to bring in more of these types of acts.

The center has also launched two of its own consumer shows—the Mesilla Valley Outdoor Expo, held in January, and the Mesilla Valley Women’s Expo, coming in September. In the development phase, Hicks and his team researched the local market to find out what types of events were in demand but missing. The Outdoor Expo exceeded expectations, drawing 4,500 people. “It flipped the switch for us and made us ask: What can we do next?” That led to the Women’s Expo, slated for September 22–24. Both of these events are managed in-house using internal staff. Looking ahead to 2014 and beyond, Hicks is planning to launch more events.

This strategy has helped the center exceed its annual revenue goals and reduce its deficit. “You’re going to see more and more of this happen where buildings are going have to get creative to improve the bottom-line performance,” concludes Hicks.

In the Land of Lincoln, Prairie Capital Convention Center Gets Upgrade
Apr 30, 2013