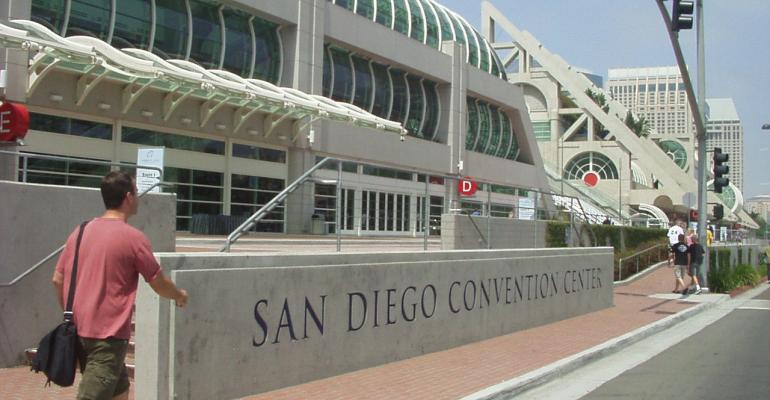 Though the theme of the Global Business Travel Association’s annual convention, held last week in San Diego (see photo gallery here), was “No Boundaries,” one of the main issues facing attendees was a vote to disband the association’s Allied Leadership Council, made up entirely of suppliers, and for all Allied seats on the GBTA board of directors to be filled though elections rather than appointments. There were presentations and breakfast sessions and plenty of hallway commentary—often centered around the head of the council, Dav El President and CEO Scott Solombrino and his impassioned fight to keep the status quo. In the end, the vote failed and the balance of power between Allieds and Directs (buyers) remains as is.

A world leader who has spent years breaking down the boundaries between countries (and has logged flight miles equivalent to traveling around the world 38 times), Hillary Clinton, former Secretary of State, U.S. Sentor, and First Lady, was Wednesday’s speaker. She fascinated the crowd with stories of her life as Secretary of State, from what it was like in the situation room the night the Navy Seals raided Osama bin Laden’s compound to meeting with leaders in Togo, who confided that they were learning so much about the U.S. government from watching “West Wing.” When asked about her plans for the future, the 2016 presidential hopeful responded that she wanted to just relax and enjoy her private life “for a while.” The week included two other keynoters: recording star Jewel (who was discovered in San Diego), who shared her poignant personal stories and sang some of her biggest hits; and former First Lady Laura Bush, who spoke about her adjustment to everyday life since leaving White House.

Standouts in a packed agenda included a number of sessions on the growing challenge of open booking, and how to get travelers to adhere to corporate travel policy. A recent study by Carlson Wagonlit Travel found that more than 50 percent of business travelers make some decisions that break with travel policy. Forward-thinking travel managers are finding ways to analyze what’s convenient for their travelers and craft their policies around that.

Travelers are driving the changes, especially the youngest generations. “People are on their mobiles all the time and, as a result, I am getting feedback…all the time,” said Katia Nisenberg, drector, global travel at AECOM, during a panel discussion on Tuesday. “The constant feedback loop they have with their peers doesn’t apply just to leisure travel.” Panelists called for the “consumerizing” of business travel platforms, like Concur’s Tripit, offering business travelers the same experience as when they book leisure travel.

Another hot topic was the integration of travel and meetings purchasing, which many consider to be the next logical step for companies with mature strategic meetings management programs that are looking to further leverage volume. BCD Meetings & Incentives has announced a new initiative around this practice, known as ITM (Integrated Travel and Meetings) which will be headed up by George Odom, former global meetings manager at Hewlett- Packard.

Reflecting GBTA’s increasingly global membership, this year’s Direct Member of the Year was from Argentina: Fernando Pablo Montes, travel manager with Telefonica and a key figure in the development of GBTA’s first-ever LATAM conference. In the four years since Mike McCormick took over as GBTA’s executive director and COO, the association has grown its membership 106 percent, much of that outside the U.S. He called on the audience to help double membership once again to help fund the association’s many advocacy efforts.

Among the important leadership changes taking place in San Diego: Donna Kelliher, director, travel and corporate services, at Dominion, was voted in as president and CEO of the association, and Sandro Honigsberg, senior purchasing manager, meetings and events for Procter & Gamble, took the helm of the Global Meetings Committee, replacing Linda McNairy, vice president of strategic partnership management for Active Network.