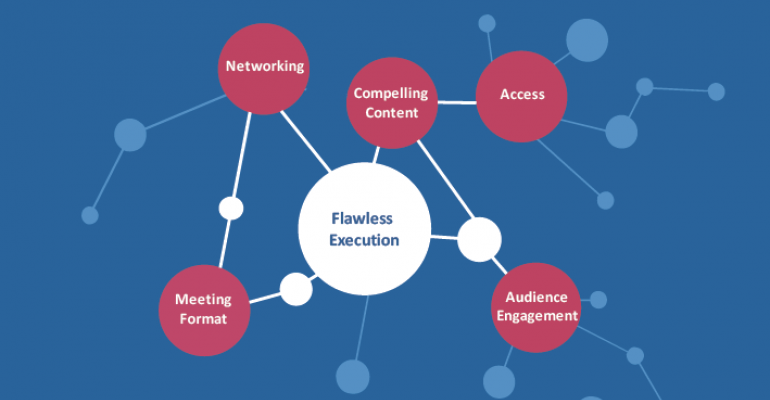 The consumer-driven mindset of today’s HCP means you better be able to show the return on their investment in your meeting.

More than three-quarters of healthcare professionals in a 2018 study said they would only participate in a meeting that can show a good return on their investment of time and money. That’s 30 percent more HCPs who said that than in 2016 when Ashfield Meetings & Events conducted its first survey on HCP meetings.

The good news is that HCPs apparently are getting the ROI they crave from scientific congresses and meetings—they rated them as their most preferred channel for medical education in 2018. Meetings lag only behind professional journals and publications as the channel they use most often, according to the 2018 study, The Science of HCP Meetings.

But demands on HCP’s time are increasing, making it harder for them to take time away from their practices. Regulatory challenges and organizational restrictions also are cutting down the number of meetings many HCPs can attend in a given year, and digital offerings are increasing in number and quality. So, they’re getting pickier about their meeting choices—as the study results make clear.

“It is critical that meeting professionals continually ask HCPs what their objectives are for the meeting, and then put that at the core of how the meeting is structured,” says Katie Koziol, HMCC, CMP, director, client services, with Ashfield Meetings & Events.

What HCPs Want from Meetings
• Content. While 40 percent of the 2018 HCP respondents say they can get the same amount of information online as they can at a face-to-face event, 81 percent said they go to meetings to learn what’s new within their disease specialty, and 72 percent said they attend to find out about the latest products in their practice area. Ninety-one percent said high-quality scientific content was important. There is room for improvement however: 45 percent also said that the meetings they have attended don’t meet their educational needs, and a quarter said the content was either repetitive or old news. Commercial bias also was a factor: 65 percent of the respondents said they experienced it on occasion.

• Networking. HCPs also crave the interaction that can only happen when people get together physically, the survey found, with 74 percent citing the ability to network with peers and specialists as a prime attendance driver, and 68 percent saying they attend so they can meet with global experts and key opinion leaders.

• Interactive sessions. “Gone are the days of long lectures and straight standard PowerPoint presentations,” says Koziol. “They want it to be interactive and have different channels they can learn from.” There is room for improvement on this factor, as the survey found that 45 percent believe meetings don’t have enough of the workshops, small-group discussions, and other interactive elements they desire, even though more than three-quarters said the interactive sessions would increase the meeting’s educational value. A full 85 percent said sessions should be kept short and impactful.

• Greater access to content. While 72 percent of Ashfield’s respondents expect to be able to pop onto a meeting portal or website to download content and presentations, more than half said that wasn’t an option. Having one platform where they can register for an event, download agenda and speaker information, and submit questions to KOLs and speakers was something 70 percent said they would like to see.

• Personalization. More than 78 percent of 2018 respondents said they want their meeting experience tailored to their specific educational goals and learning preferences. Being able to help shape the event to meet their needs was something 80 percent said they wanted—but 38 percent said they had never been asked for their input. “Sometimes people are concerned that ‘engagement’ will mean time or money or new tools,” says Koziol. “Sometimes it just means asking a few questions. We need to start communicating with HCPs earlier to get input from them on what they want to have on the agenda.” Of course, gathering and analyzing attendee input, and then using it to shape the meeting, can be time-consuming, but “You have to understand what people want to achieve by attending your meetings if you want them to keep coming back,” says Andrew Moore, global head of technology and compliance with Ashfield Meetings & Events.

• A mix of virtual and physical. With 78 percent wanting a mix of face-to-face and virtual education, Moore says his company is looking into making some of the information available through virtual channels pre-event so live events can provide more of those impactful, interactive roundtables and clinical experience sharing HCPs are looking for.

• To get away from the daily grind. In 2018, 9 percent more HCPs said they go to meetings to have some space from their practice than in 2016. “The inference we take away from that is HCPs want to have focused time for their professional education and they block out that time and space while they’re on site,” says Moore. They also like having the opportunity to check out a new destination, so location is still a factor in their decision to attend, despite increasing regulatory and perceptual limitations on the destinations and venue types considered appropriate for HCP meetings.

What Keeps HCPs From Attending Face-to-Face Events
• Time away from practice. While many like to have dedicated time to travel for their education, heavy workloads and busy practices were the top barriers for 74 percent of the 2018 respondents. That may be why they said they wanted their time commitment—including travel—to be just 3.2 days, down a few hours from the 3.6 days they cited in the 2016 study. They also don’t want to travel as far, saying they only want to spend 4.7 hours to get to a meeting now, as opposed to 6.8 hours of travel time they were comfortable with in 2016.

• Regulatory barriers. In both the 2016 and 2018 studies, just over half said that increasing regulatory barriers are impeding their ability to attend meetings. That this percentage hasn’t changed more than a percentage point between the two studies may mean that the effect of European and U.S. regulations requiring disclosure of transfers of value between life sciences companies and HCPs has hit a plateau, according to a white paper commenting on the study results. LINK https://start.ashfieldhealthcare.com/acton/media/25577/science-of-hcp-meetings-us-2

• Decreasing sponsorship opportunities. Forty-one percent of HCPs in the 2018 study said sponsorship opportunities from pharmaceutical companies weren’t as easy to come by as in the past. That can be challenging for the more than a quarter of respondents who said they had to apply to companies for sponsorship. Some healthcare organizations also are cutting back on the number of meetings they allow their HCPs to attend each year, says Koziol.

But if the perceived ROI is high enough, they will come despite these barriers, say Koziol and Moore. “It’s up to meeting professionals also to educate our stakeholders on the feedback we get from our HCPs from up-front polling, Q&As during the meeting, and following up post-meeting,” says Moore. “And to analyze that data to see if HCPs are actually learning. We have so many tools now we can use to better structure our meetings and measure HCP satisfaction.” Adds Koziol, “It’s not just about asking questions, but also doing something with the results. We have to not be afraid to make small adjustments from meeting to meeting that will enhance the experience for the HCPs.”

Note: You can download a PDF of the white paper on the study here.