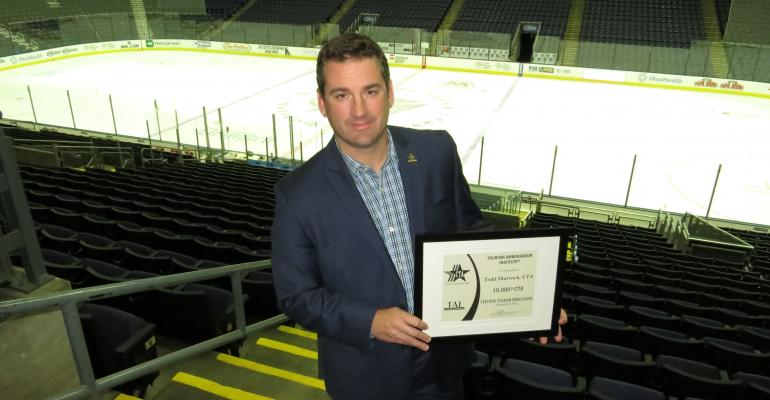 The Certified Tourism Ambassador program reached a milestone in September when it awarded its 10,000th CTA designation to a public relations executive for the National Hockey League’s Columbus (Ohio) Blue Jackets.

“I think it’s tremendous that there are that many individuals who are CTAs,” says Todd Sharrock, CTA, vice president of communications and team services for the Blue Jackets—the 10,000th CTA. “It says a great deal about the success of the program and the importance that people place in it.”

The CTA program was launched in 2006 by the Tourism Ambassador Institute, an organization founded by Mickey Schaefer, president, Mickey Schaefer and Associates, Tucson, Ariz. The program trains and certifies employees and volunteers in the tourism industry to become experts in what their respective regions have to offer to visitors and how to meet visitor needs. They include front-line staff and executive managers who work in hotels, attractions, restaurants, government, transportation, and many other industries.

“Todd symbolizes how tourism destinations are recognizing that enhancing the visitor experience is an essential way to set themselves apart,” says Schaefer. The CTA program is run through convention and visitors bureaus like Experience Columbus, a CTA-accredited provider, to train their tourism industry workers on providing top-notch customer service.

As part of the certification, Sharrock and his fellow CTAs learned about Columbus history, geography, shopping, dining, and attractions. They focused on how to best serve visitorsas an entire community—whether it’s at the airport, a hotel registration desk, in a taxi, a restaurant, or anywhere visitors go while in town. Overall, 1,000 workers in Columbus earned their CTAs, making the city among the fastest-growing CTA programs along with San Antonio and Sonoma County, Calif.