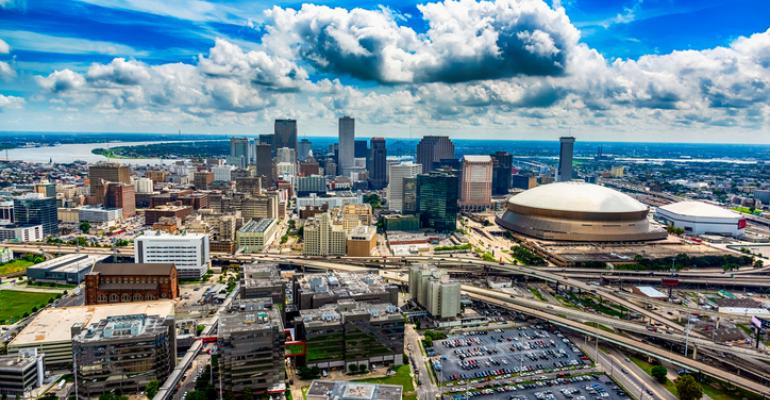 Cancellation, switching locations, and a 36-hour pivot to virtual were among the actions taken by various event hosts. The city bounced back quickly, however.

After powerful Hurricane Ida swept through New Orleans on August 29, several meeting groups had decisions to make—and quickly—about whether to proceed with their events in the city in the days and weeks that followed.

“We are so grateful to the organizers of Smart Energy Week, who worked closely with us throughout the pandemic to plan a successful event in New Orleans with all Covid safety protocols in place,” said Stephen Perry, president and CEO of New Orleans and Company. “They were looking forward to getting back to business face-to-face here, but had to cancel due to Hurricane Ida and its aftermath coinciding with their set-up in the city.”

Another event that was to happen in New Orleans around that time is ConferenceDirect’s Annual Partner Meeting, which would have brought 600 attendees to the Hyatt Regency New Orleans. On September 8, the company announced that it was moving the event to the Ritz-Carlton and JW Marriott Grande Lakes in Orlando from September 19-24. Brian Stephens, founder and CEO of ConferenceDirect, said that “it was important for us to keep the same dates, as our attendees have held these dates and were looking forward to meeting. Orlando is the number-one destination utilized by our customers, so we feel it is an excellent location for our program.”

In the Eye of the Storm
While the planning teams for those two events had a rather small window in which to enact contingency plans, the planners of the Insurance Accounting & Systems Association’s annual meeting had less than three days to figure out what to do.

That’s because their annual event, called IASA Xchange and OnPOINT, was set to host 550 in-person attendees, presenters, and exhibitors at the Morial Convention Center from August 29 to September 1, while also beaming in more than 500 online attendees. Hurricane Ida struck New Orleans on what would have been the event’s opening day.

Starting one week before the event was to kick off, though, IASA’s leaders began to monitor the storm’s developments and communicate with Morial Convention Center staff and city hoteliers about potential impacts. By August 25, the storm had a more certain destination: Louisiana. The convention center and local hotels told the association’s staff that they were prepared to host the event, arranging for extra food and supplies as well as generators for back-up power.

“Despite the almost certainty of Hurricane Ida interrupting the conference at this point, and despite association staff fielding dozens of emails and calls daily about potentially canceling the event, IASA was not [yet] able to cancel the event through force majeure,” said Kerry Crockett, CMP, CEO of IASA.

Association staff and vendors landed in New Orleans on August 25, 26, and 27 to prepare for the August 29 start. Also during that time, the association’s leaders had conversations with attorneys about contract clauses and cancelation options, all while staying on top of weather updates, emergency management, and inquiries from members about the event’s status.

By the morning of August 27, weather reports had Ida coming directly through New Orleans on August 29 as a category 3 hurricane. At that point, IASA canceled the in-person conference. Staff and volunteers, some still in New Orleans, then scrambled to transition to a fully virtual event while also planning their evacuation from the city.

Over the next 36 hours, the team converted hundreds of registrations from in-person to online, called dozens of speakers to gauge their ability to shift to a virtual presentation, worked with on-site exhibitors to pivot to virtual, and more. “Fortunately, we had planned for a hybrid conference because of Covid, so we already had the technology and infrastructure in place,” Crockett said.

In the end, IASA staff and volunteers escaped the worst impact of the storm and managed to convert a mostly in-person event to a fully virtually event for all 520 attendees. “It turned out better than anyone could have expected,” Crockett said. “But I can’t lie—we’re all looking forward to a much more normal IASA Xchange conference in 2022 in Baltimore.”

The Latest Update from the Big Easy
“New Orleans came through incredibly well, as the [federal] investment in our new levee system paid immeasurable dividends,” said Stephen Perry. “Most New Orleans hotels were back up within days to host first responders, FEMA personnel, utility workers, insurance and contractor personnel, and countless others responding after the storm. Many of our restaurants opened [as of September 10] and the vast majority will reopen in the coming week, along with our museums and attractions.”

“However, our obligations are not just to our customers but to our region,” Perry continued. “Large conventions and meetings were simply not possible [in early September] as our facilities were needed for other public priorities. While we will restart some leisure travel and small meetings in the next ten days, major meetings will not be hosted until later in September, with October, November, and December getting back to normalcy in New Orleans.”