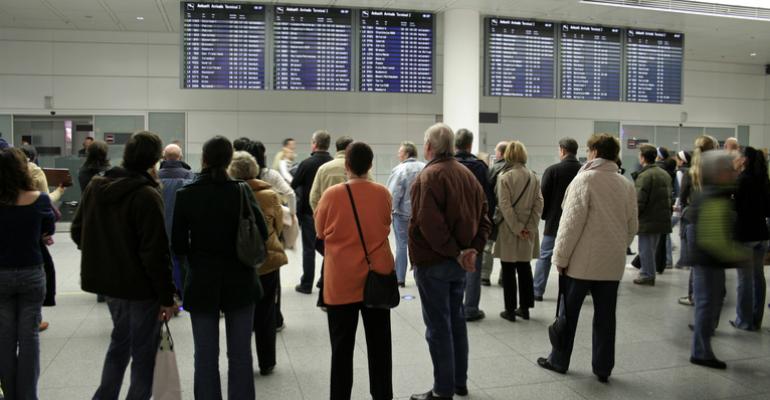 Flight cancellations and reduced schedules due to pilot and crew shortages could cause headaches for meetings held in April and May.
Meeting Planning Toolbox

Labor Issues: One Alleviated, One Exacerbated

The federal government lifted the cap on temporary-worker visas, which could help the hospitality niche. But a recent spate of airline cancellations reveals the unpredictably of travel due to a shortage of pilots and crews.

With in-person meetings ramping back up, suppliers are under pressure to hire the right number of employees to service meetings and events—at a cost that doesn’t prevent them from being profitable. But when the federal government announced in March that its H2-B visa program allowing non-U.S. residents to work in the country had reached its limit of 66,000 until October 1, the industry responded with disappointment.

Because many of those visas go to people who would work in travel, hospitality, and foodservice—and the Bureau of Labor Statistics found that 73 percent of the 2.1 million jobs yet to be regained nationwide are in those sectors—the U.S. Travel Association reacted quickly, urging the Biden administration to boost the number of H2-B visas beyond that number “to ensure these businesses are adequately staffed.”

The good news is that the federal government listened. On March 30, the Department of Homeland Security made available 35,000 more H2-B visas for use by October 1.

Even so, “it is evident that the workforce shortage is holding back the recovery of industries across the economy, especially in leisure and hospitality,” said USTA executive Tori Emerson Barnes in reaction to the new-visa announcement, after acknowledging it was a “step in the right direction.” Further, she said that “as we move into the busy summer travel season, businesses across the country will need access to temporary workers to perform vital operations and ensure they can meet a surge in demand...We continue to urge the administration to exercise the full authority it was given by Congress and release all authorized H-2B visas above the cap,” seemingly a suggestion for the government to allow even more new visas than the 35,000.

“After a number of tough operating days this week that began with severe weather challenges and air traffic control delays up and down the east coast, we are continuing to work to minimize impacts to our customers,” said an airline spokesperson. “Despite hiring more than 3,000 new crewmembers already this year, like many businesses we remain staffing constrained and these disruptions exacerbate an already challenging staffing situation.”

JetBlue said that in order to provide internal flexibility to handle potential upcoming springtime weather events, the airline will be canceling some flights this coming weekend as well, while also making a “small schedule adjustment through the rest of the month.” But wait, there's more: "We've already reduced May capacity by 8 to 10 percent, and you can expect to see a similar-size capacity reduction for the remainder of the summer," said JetBlue COO Joanna Geraghty.

On the West Coast, Alaska Airlines reported 18 more cancellations on Monday, April 11 out of Seattle-Tacoma International Airport, after hundreds of cancellations over the weekend.

According to this article in the Seattle Times, staffing shortages have been largely to blame for the cancellations that have delayed or stranded tens of thousands of passengers. Also, some passengers reported 10-hour wait times on Alaska’s customer-service line.

The airline apologized in a statement last week, saying that “the primary driver for cancellations is the shortage of pilots available to fly versus what was planned when we built our April schedule in January. Across the industry, airlines are seeing a strain on pilot capacity as air travel demand returns. All airlines are hiring, but we are hiring faster than we’re able to train new pilots.”

Food for thought for planners coordinating meetings and events taking place in April and May.