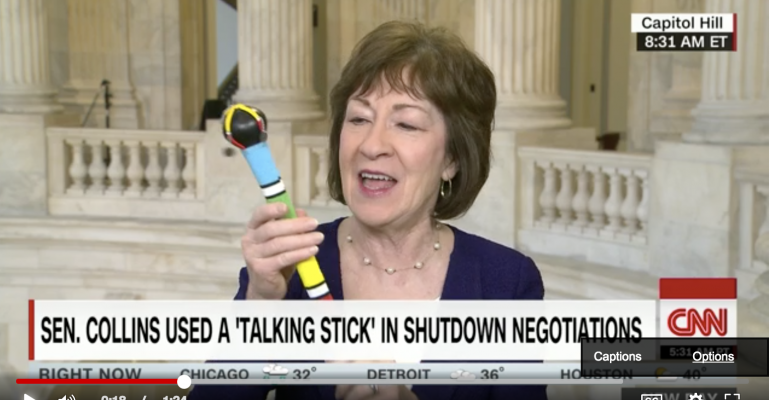 Girl Scout Cookies and a Talking Stick: What It Takes to End a Government Shutdown

Senators brokered a deal to end the U.S. government shutdown by using an age-old meeting tool.

When a bipartisan group of dozens of senators huddled in the office of Sen. Susan Collins, R-Maine, last week to hash out a deal to get the U.S. government running again, it could have gotten ugly. But Collins used the same tool people have been using for millennia to keep conversations orderly—a talking stick.

According to reports in The Guardian and The New York Times, she had a hard-carved wooden Maasai talking stick on hand that she used to keep the conversation civil—no one was to speak unless they were holding the stick.

And it appears to have worked. Fortified with Girl Scout cookies and popcorn—yes, of course F&B was involved—the group of senators helped convince Senate leadership to make a deal to reopen the federal government on Monday after the three-day shutdown.

You may think talking sticks are a little hokey in this day and age, but if it’s good enough for the Senate, it’s probably still a good tool for your next meeting. Though if emotions run high, as they reportedly did at the meetings in Sen. Collins’ office, you may want to use something a little softer. According to Politico, the senators ended up replacing the stick with a rubber ball after Sen. Lamar Alexander (R-Tenn.) almost busted a glass elephant in Collins’ office when, after Sen. Mark Warner (D-Va.) interrupted him, he got a little too emphatic in throwing the stick at Warner.

If Your Venue Dumps Your Event, Have a Concessions List Ready
Dec 08, 2022