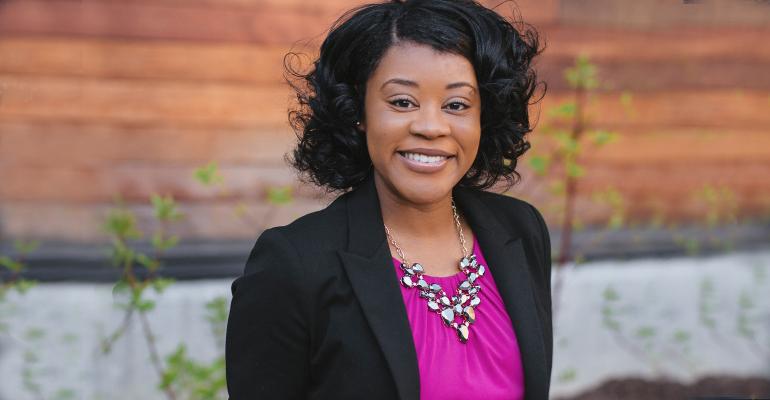 Wise Beyond Her Years

At age 29, Janelle Lewis has big responsibilities at the Foundation for the National Institutes of Health, plus interesting observations about delivering medical education more effectively.

In early October, the Professional Convention Management Association released its "20 in Their Twenties" list of professionals whose influence is rising quickly in the meetings and events industry. One of those recognized was Janelle Lewis, meetings and events manager at the Foundation for the National Institutes of Health. It is hard to imagine, though, how she will find the time to travel to Pittsburgh in early January to be recognized during PCMA's Convening Leaders conference.

With only two meeting planners and an assistant on her team, Lewis is responsible for more than 60 educational events a year; many are project team meetings as small as 30 people, and others are symposia for up to 500 people. And while most medical meeting planners coordinate events in a particular discipline, Lewis must bring together experts on issues ranging from HIV/AIDS to child malnutrition to cancer to Alzheimer's disease to neuroscience. "We have a research partnerships branch and a global health branch, so practically any major disease or health crisis that is being actively researched has a team that we work with," she notes.

When event logistics are not top of mind for Janelle, there's budgeting, performance reviews, and administrative chores, the more mundane dimension of the job. Then again, budgeting has become more interesting precisely because of FNIH's success with its meetings. "We have been adding about five events per year over the past few years, but it looks like 2019 might have as many as 10 new events," bringing the portfolio to more than 70. "Scaling up to meet that demand is my biggest challenge," she says.

"Having more projects is great because that means FNIH is developing a deeper reach into the biomedical industry and more people are learning about what we do," Lewis adds. "But the staff are not always growing at the same pace." Most events cost nothing for attending researchers; they're funded by various sources including private donors, corporate sponsorships, and government grants. For Lewis, then, getting all the work done "is a matter of redistributing responsibilities across the team as we go, especially if we can't hire more people. But we are also looking to do some outsourcing, which we have not done before."

Even with her deep work experience in the meetings niche, Lewis is not so far removed from being a student herself. As a result, she sees aspects of the medical-education environment that could be more effective. First, "it might be helpful to move away from traditional room sets more often, in favor of ones that break down formality and encourage attendees to be more interactive and conversational." Specifically, "I try to break my program managers out of using U-shaped seating with projectors and presenters set on a tier, and instead use more crescent rounds with microphones on every table. We do not want it to seem so formal that it discourages attendees from participating, and becoming observers."

Next, Lewis has overseen a significant increase in the number of presenters from around the world who appear via videoconference. "It enhances the education so much to have access to people who otherwise could not get there in person," she says. "Also, a videoconference segment brings variety to the itinerary and holds people's attention."

Another element that Lewis uses to maintain attendees' focus: Longer breaks between sessions. "I understand that content leaders try to pack as much as possible into an eight-hour day because you have prestigious professors or other presenters you can only get in a narrow window of time," she notes. "But we find that people are much more responsive when they have a mental break that's long enough to check email and maybe connect with their family, or just have a snack and a drink and relax their minds without feeling too rushed. The difference in attendee productivity when we offer 30 minutes to break instead of 15 minutes has become clear to us."

Lastly, Lewis is adamant about making her event registration as quick and seamless as possible. "With some outside events that I have registered for, I just lost interest halfway through the process because I'm thinking, 'Do you really need to know this type of information for me just to attend?' If we have an attendee's information from a previous event, we try to pre-populate as many fields as we can while staying in compliance with the Sunshine Act. Of course, attendees can delete their information from our database whenever they want, but we just give them a way to make it quick and simple. And we only send them email reminders when it is really necessary; we don't want to flood their inboxes."

It might seem a stretch to think that someone still shy of 30 could fulfill such a wide-ranging and demanding role, but Janelle Lewis began preparing for a career in events early in her college years. At the University of North Carolina at Chapel Hill, Lewis majored in communication studies and minored in entrepreneurial studies. "I always had an interest in event planning but more for the entertainment industry," she says. "I started looking into concert management," and she interned at a amphitheater in Raleigh while at school. Meanwhile, her minor concentration sharpened her understanding of the financial side of the business. "We had to create business plans and initial budgets for hypothetical start-up companies, and that really helped me," she says.
Her first full-time job was a step straight into the fast lane of events: conference coordinator for Gaylord National Resort and Convention Center outside Washington, D.C. "That facility is huge but planners don't want to deal with several different contacts, so my role was to work with every department to gather information for each planner and present it in a streamlined way." After two years at Gaylord, she applied at FNIH to be an events assistant. Five years later, she's running the department.

Interestingly, Lewis says that her personality isn't quite as outgoing as the typical planner. "I've been told that I'm more easygoing and reserved. Even when I'm stressed, I don't show it, and that has helped me build trust with my colleagues and other meeting stakeholders. I am able to put people at ease in difficult moments by saying, 'Okay, here are the steps that will get us closer to a solution for this problem.'"

Lewis also relies heavily on project-management software as well as event-planning technology tools to keep her mind uncluttered, especially when she needs to summon up creativity to solve an urgent problem. Lastly, "I just make sure to double-check anything I feel anxious about, and sometimes my gut is right: there is something I missed. But I do that before a client would ever see there was an issue."

With her career in full bloom, Lewis is thinking ahead as well. Where does she want to be in, say, 10 years? "I am still trying to figure that out. I might want to be the director of a really large conference someday to see what that's like," she says. "But I'd also like to start my own events company and put on social and cultural events where people get to have unique experiences." In the meantime, duty calls: Lewis is studying for the CMP exam whenever she's able.
TAGS: Professional Development
0 comments
Hide comments
RECOMMENDED FOR YOU

A New Way to Broadcast Your Medical Meeting Knowledge
Feb 16, 2021