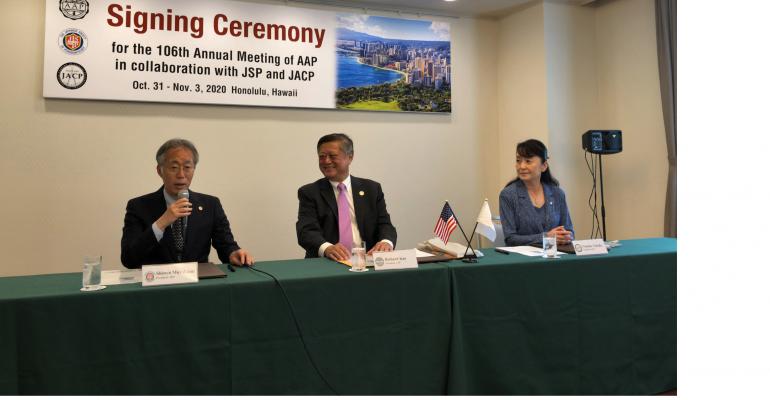 Executives from AAP, JSP, and JACP conducted a formal signing ceremony in Japan to cement their partnership for the November 2020 AAP annual meeting in Honolulu.
Medical & Pharma Meetings

In early November, the 106th annual meeting of the American Academy of Periodontology will celebrate a milestone: 20 years of partnership with the Japanese Society of Periodontology and the Japanese Academy of Clinical Periodontology. Meg Dempsey, AAP’s associate executive director for membership, marketing, and communication, calls it a “very collegial collaboration” that’s benefited all three organizations. However, this collaboration is more than simply collegial; there’s a level of interaction and influence between the parties that isn’t seen every day in the medical-association field.

For AAP, the benefits of this collaboration are most clearly seen in even-numbered years, when its annual meeting takes place at a U.S. West Coast destination. While roughly 3,700 gum-disease specialists attend the event every year, the number coming from Japan and other Asia-Pacific nations can be as high as 900. That figure was reached in 2010, when AAP went to Honolulu—the site of this year’s conference.

Interestingly, it was the previous annual meeting in Honolulu, held in 2000, that originally spurred the association’s leadership to formally reach out to the Japanese societies. “It was the first time we were going to Hawaii,” Dempsey says. “Around that same time, we began to notice more and more Japanese dental students coming to the U.S. to complete a perio program. Most of them return to their home country for their practice, but they know the educational experience here. We approached JSP and JACP because we knew the quality of their membership, research, and programming, and we figured that offering event-related incentives to their practitioners would boost our attendance. So we inked a deal to hold our West Coast meetings in collaboration with our Japanese counterparts, and to offer their practitioners the AAP member rate for the meeting.”

Twenty years later, that deal is still in effect. Along the way, Dempsey has discovered a few things that can help other medical societies conduct international relations in ways that benefit their events.

Managing the Event Collaboration
About 18 months ahead of each annual meeting on the West Coast, AAP invites representatives from JSP and JACP to come to its Chicago headquarters and confer with the continuing education oversight committee “to be part of the planning process from the outset,” Dempsey says. “We want them to understand the themes and issues we’re looking to address and who will be on the program from the U.S. side. We want to hear their opinions and also let them provide their best and brightest to deliver their research and participate in panels.” In total, about 20 percent of the 40 educational sessions have speakers or panelists who are members of JSP or JACP—and they might actually be from Taiwan, South Korea, or another country besides Japan, providing AAP's audience with greater diversity of experience.

In addition, AAP dedicates a breakout session for JSP and JACP to address an issue specific to attendees from Asia Pacific. “It’s not CE-eligible, but it gives them a chance to hold a forum of their own,” Dempsey says. Lastly, the Japanese associations will host a “samurai night” social event for attendees from the Asia-Pacific region. “AAP provides a venue for that event, and it draws a big crowd for the networking benefits.”

When AAP meets in Honolulu in particular, the destination serves as an additional draw for attendees from the far side of the Pacific Ocean. “Hawaii has a lot of fun distractions, and people attend in order to enjoy those as well,” Dempsey notes. “When we meet there, we shorten the program so that breakouts end by two o’clock each day and we promote that.” 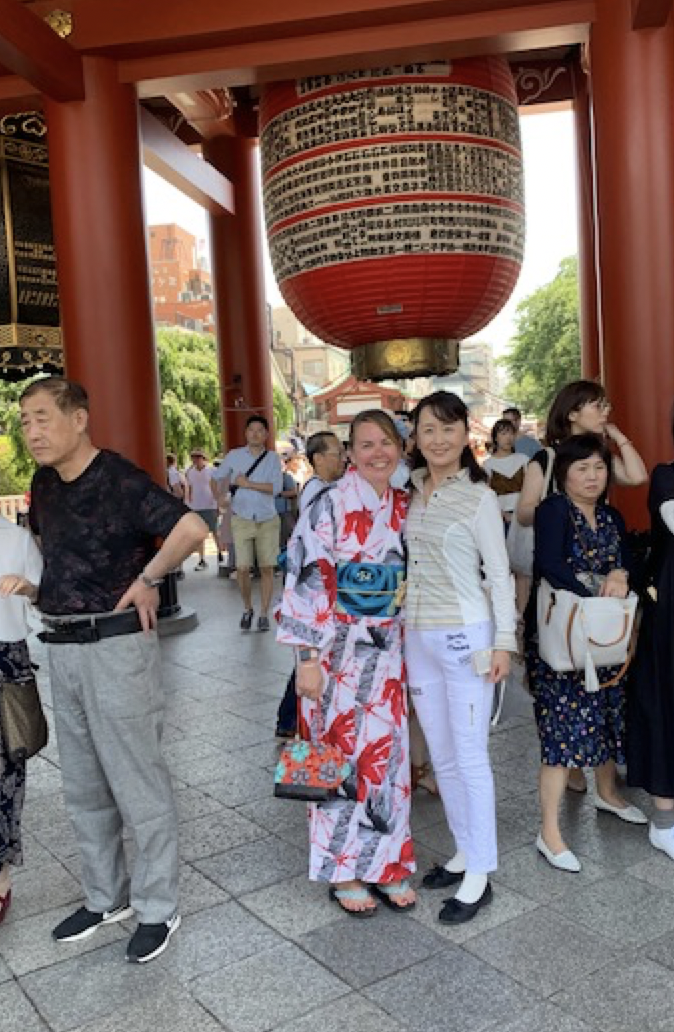 On the flip side, AAP’s relationship with JSP and JACP also involves some of its team going to one of those societies’ annual meetings in Japan every other year. “Our executive director, president, or a board member attends with me to see what they do,” says Dempsey (pictured here, in kimono during trip to Japan). While there, “we also have a formal signing ceremony for the next AAP annual meeting where we will be partners.” This involves executives from all three associations sitting down in front of an audience of members and trade media to speak briefly and conduct the signing, complete with custom banners and even special pens for executives to use.

Advice for Building International Alliances
Dempsey offers three guidelines for other medical associations looking to forge a meetings partnership with a professional society in another country. First, “think as globally as possible for a few of your content tracks. Try to address themes or issues impacting your specialty that are not just hyperlocal to the United States. Healthcare in Japan is very different than here, but we have been able to find commonalities with respect to innovation and new clinical trends. Finding that common ground is so important.”

Second, “be mindful of different business customs. Sitting down and having a signing ceremony with all the trimmings might seem like too much pomp and circumstance in the United States, but it is very important in Japan. You must be cognizant of the customs that are significant in that culture and align your expectations and actions.”

Lastly, “be ready to negotiate and have some give and take. Like any other organizations you partner with, they might ask for things that are unattainable or you aren’t willing to do, and they might not agree to some of the things you want. You have to be prepared to find the middle ground to satisfy the needs of both societies.”

In the end, all this work can bring big benefits to an association. “We want to be seen as the leader in periodontics,” Dempsey says. “From a public-relations and optics standpoint, these partnerships are a major way for us to be recognized around the world.”