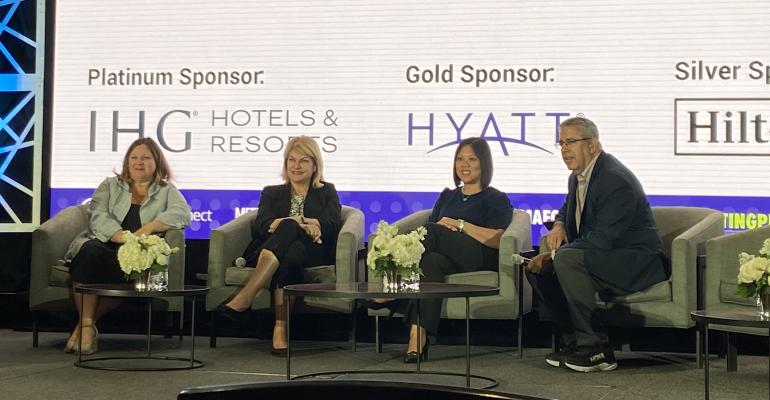 A panel at Pharma Forum discussed exceptions, perception, and other meal-cap challenges as food prices go through the roof.

Inflation has hit food prices especially hard in 2022, rising 8.9 percent in the first seven months alone, according to the U.S. Department of Agriculture. This pricing environment makes the work of life-sciences meeting professionals especially challenging because of “meal caps”—established dollar limits for meals given to healthcare providers.

For advisory board meetings, investigator meetings, educational programs, and other events with HCPs, meals must be “reasonable” or “modest” to align with government rules, and the transfer of value (TOV) to HCPs must be reported. While U.S. companies set their own meal caps, concerns about compliance perception typically have typically interpreted “modest” as frugal, at best.

A panel on meal caps at the Pharma Forum conference in September included representatives from a pharmaceutical company, two third-party agencies, plus moderator Michael Varlotta, formerly a medical education executive at Johnson & Johnson and now principal at MLVII Associates. Varlotta launched the company in 2022 to help pharma address issues around compliance and fee-for-service activities with healthcare providers.

The Work-Around Temptation
One strategy proposed by some hotels or pharma marketers to get around meal caps is to move the cost of food to another category. In other words, if the meal cap is $125 but the actual cost of the meal is $175, the hotel charges $125 for the meal and moves the other $50 into room rental or some other cost area. Panelist Cathy Mariano, CMP, head of the pharmaceutical and medical client group for Bishop McCann, has certainly seen invitations to bill in that way, but said it’s a nonstarter. “I think for all of us in the room, that’s an absolute ‘no.’ Absolute compliance is always the first thing that we look at, and that's always going to be the driver.”

Fellow panelist Robin Macario, senior manager, meeting and convention services at Genentech, agreed. “We just would never take the risk and would never even consider it. But it's not like somebody doesn't ask us to.”

For anyone in the Pharma Forum audience tempted to skirt the rules, Varlotta spelled it out. Even if a $175 meal is billed at $100, with the balance billed elsewhere, that's still a transfer of value for the HCP of $175. “Now, not only have you probably violated your own internal compliance, but you have all sorts of issues with potential reporting fraud with the federal government or any [other] national governments that you would report to.”

Satisfaction Is the Watchword
Pharmaceutical planners working within the constraints of meal caps need to be practical, reminded session attendee Michael Mahoney, senior director, strategic event services at Genentech. “The goal of meals at HCP meetings has to be to satisfy the attendees, not surprise, delight, or amaze them,” he said, to a smattering of applause from the session attendees. “I’ve heard people talking about omelet stations—I haven't seen an omelet station at a meeting in a very long time. Yes, that would surprise and delight attendees, but it’s also more expensive and would push [meal cap] limits. I think as long as we’re serving quality food that tastes good and is presented well, we're going to hit the mark.”

Agreeing with Mahoney, Varlotta recounted a change he made to his small ad-board meetings. Rather than having a buffet set out on arrival night for the HCPs, he set up a small boardroom where doctors came at their leisure to order off a three-item menu and chat with company executives. “It was far cheaper and easier to do, and they were really satisfied,” Varlotta said, noting that the menu options were simple, including a hamburger and a salad with a protein.

Playing the Exception Card
When a planner can’t negotiate a menu that fits their meal caps, one tactic is to approach the compliance department for an exception. And with 2022 prices, that move has become more common.

“Before the pandemic we did not have a lot of exceptions; in the current state, we have them weekly,” said panelist Nikki McLain, CMP, SMMC, account director, meeting solutions and venue search at BCD Meetings & Events. “Those are not fun conversations. We are as transparent as possible in the RFP process, but because of inflation and just the cost of everything these days, when a company is not willing to make increases [in their meal caps], we have had to go to compliance more than I think I ever have in my career.

“What that means for us as the third party is putting together a very detailed e-mail that we then passed to the customer,” she adds. “It is the customer's responsibility to then bring it to their compliance officer. Sometimes, [the exceptions] are granted and sometimes they're not.” McLain noted that the meeting’s location and the urgency of the request are both factors that play into the compliance department decision.

An “ulterior motive for requesting exceptions” suggested Varlotta, “is to make sure the compliance team knows that you're challenged; you're fighting; you're out there being scrappy, trying to figure it out.” Requesting exceptions on a somewhat regular basis, he said, will help support your cause when you later request that compliance reevaluate meal caps. “If you never ask for an exception, they may wonder, ‘why are you coming to me now?’”

For Genentech planners, data has been the key to largely avoiding the exception process. In their reviews with compliance, they first have a conversation on what constitutes a modest meal—for example, a breakfast of eggs, protein, fruit, coffee, and juice. Once that is established, they bring out the data: “a Google doc that’s got 50 tabs on it with the costs at every hotel we do business with,” says Mahoney. That data has helped compliance understand industry pricing and create a tiered system with different caps for different cities.

One audience member noted that planners who feel doctors must have a fun beverage that approximates the look and feel of alcohol may not be aligned with Office of Inspector General’s concerns that speaker meetings had become too much about entertainment and taking doctors to the latest trendy restaurant. Varlotta agreed. Mocktails, at first seems like a nice option, he said. “But when you start to think about it and the true spirt of what OIG was saying when it changed the code, it might not be the right approach.” However, he noted, that would be a company decision; serving mocktails isn’t breaking any rules.

Whatever the decision, it’s important to control perceptions, said BCD M&E’s McLain. If attendees are walking around with a beverage that looks like a martini or an old fashioned, and it’s unclear whether there are spirits in the drink or not, “we have to be smarter about the signage that we're putting out from a compliance perspective—or you just nix it entirely. It's really up to the client.”