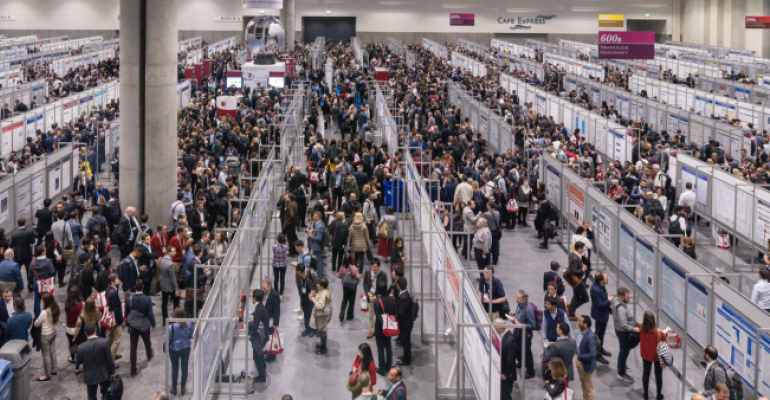 On the Road Again, and Again

The American Society of Hematology delivers highlights from its annual meeting (shown above) to nine locations around the world in three short months. Here's how ASH pulls it off.

While many meeting planners look forward to a few days of mind-clearing relaxation after their largest events each year, Marshall Nayer has no such luck. Once the 29,000-attendee annual meeting and exposition of the American Society of Hematology ended in early December 2018, the senior manager of meetings for ASH arrived back in Washington, D.C., from San Diego and went straight into "road show" mode. He had only four weeks until the Highlights of ASH event series began, where the best research and educational content from the annual meeting is presented in six other U.S. cities to a total of 1,300 more hematology-focused healthcare professionals—between 150 and 300 attendees per event.

Although "we don't actually use the term 'road show,'" notes William Reed, chief event strategy officer for ASH, "we conduct Highlights of ASH in two U.S. cities each weekend for three consecutive weekends in January. So, I imagine it's somewhat like running a concert tour."

For ASH, it's not simply a North American tour. Once those six programs wrap up, the three international versions come along quickly: The Asia-Pacific event happened in Bangkok in late February, followed by the Mediterranean version in Athens in mid-March. And come early April, the Latin American event will be in Lima, Peru. Each one draws between 450 and 800 attendees, considerably larger than each Highlights of ASH program in the U.S. 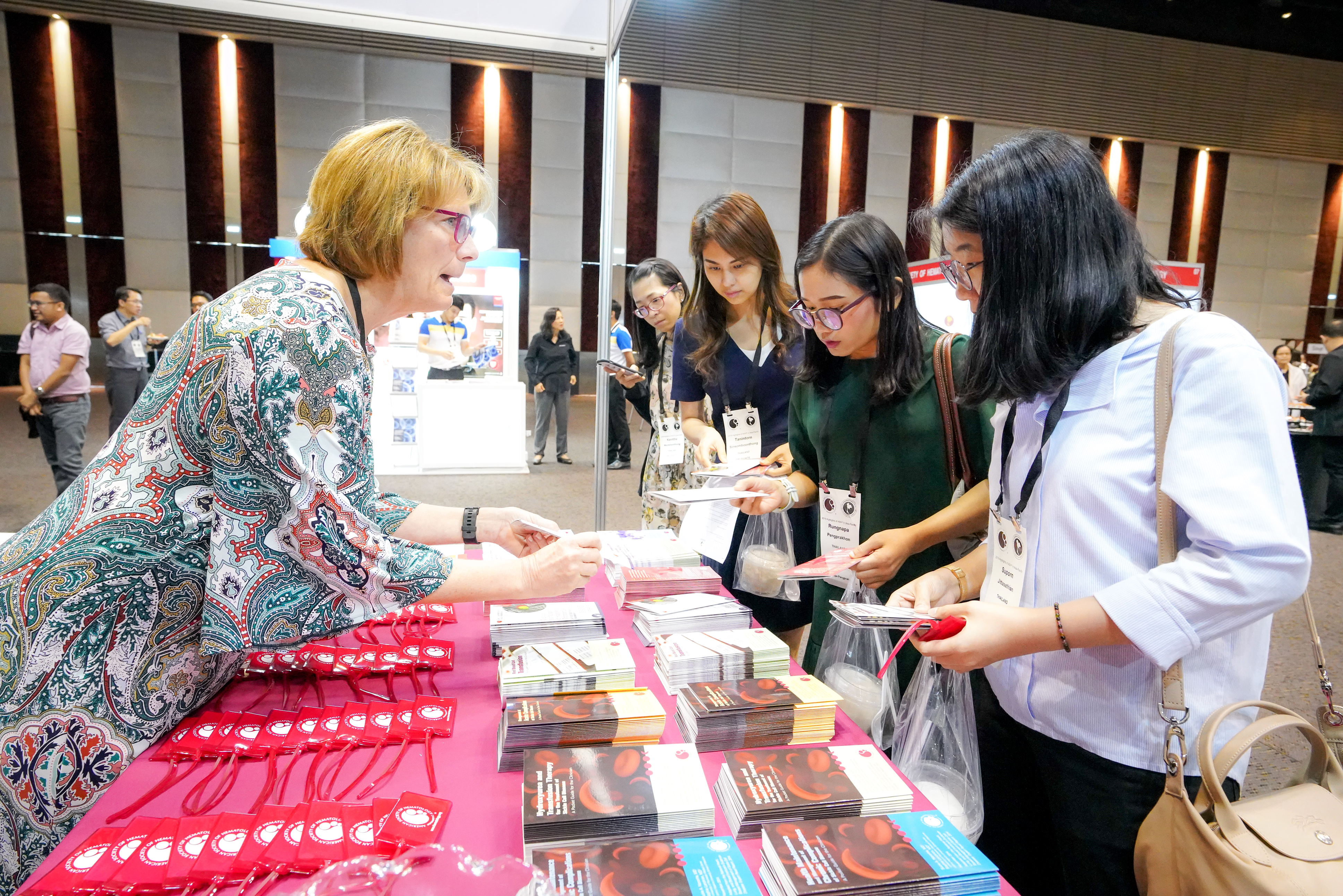 Consistency of attendee experience across all its events, large and small, is a core philosophy for ASH.

In the mid-2000s, before Nayer and Reed arrived at ASH, the association conducted a membership survey that found "huge demand for clinically focused presentations in a small-setting format," says Nayer. As a result, ASH launched a single Highlights event in 2007 that allowed for increased interaction with the expert presenters and with colleagues; it received high marks from attendees. By 2010, the program had expanded to six events; after that, ASH promoted Nayer to lead its seven-person planning team and partner with ASH's seven-person education team on the initiative.

Interestingly, ASH's goal for the domestic event series is not to drive more annual-meeting attendance. "The objective is to increase engagement with our total audience," says Reed. "We know that not every clinician can be at the annual meeting—someone has to be at the home facility to care for patients. The Highlights of ASH series gives those clinicians a chance to tap into the top-level content from the annual meeting. And although we offer webcasts of annual-meeting content, a Highlights of ASH event is an intimate setting where they can directly engage with our issue and specialty experts."

In fact, because of their work schedules, many domestic Highlights participants don't attend the Friday-morning-to-Saturday-afternoon event that's closest to them. Washington, D.C.; Atlanta; Miami; Chicago; Seattle; and a northern or southern California city are anchor locations for Highlights events, unless one plays host to that year's annual meeting. "We choose cities with strong air service because clinicians' decisions on which event to attend are not based on proximity but rather on which weekend they can be away from their work," Reed adds. "Some people fly across the country to attend on a weekend that fits their schedule." He also finds that some practitioners alternate their annual-meeting attendance and Highlights-event attendance over the years. 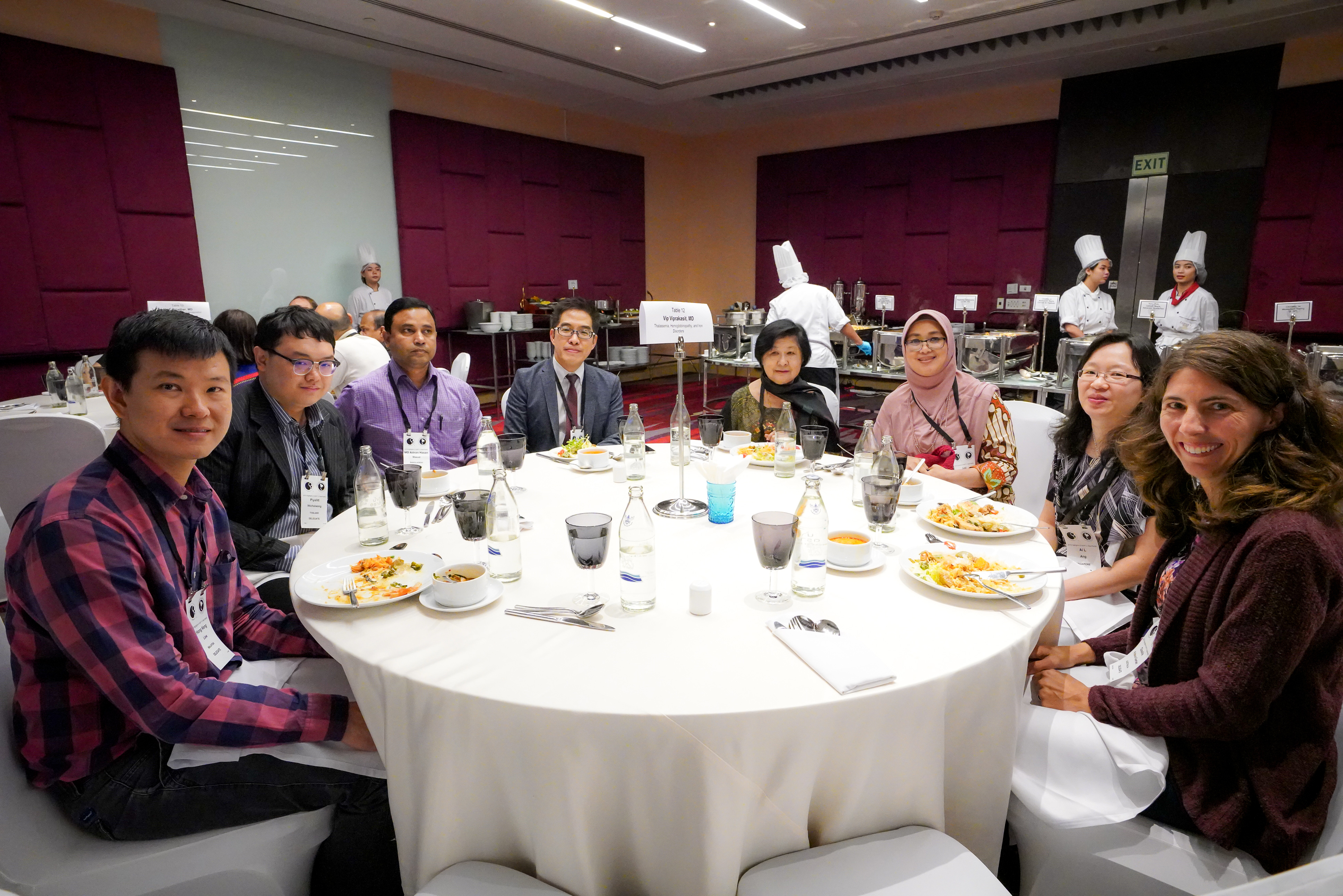 Like its regional counterparts, the 2019 Asia-Pacific version of Highlights of ASH allowed attendees to have much personal interaction with presenters, and with each other.

With the international versions, the goal is to "engage hematologists who might never come to our annual meeting because of distance and cost factors," Reed says. "Our engagement also has a particular focus on helping trainees in a region feel supported and get access to the latest scientific research and its clinical applications in a brief time frame." The Latin American event debuted in 2009; the Asia-Pacific event in 2011; and the Mediterranean event just this year. Because ASH already has joint programs and symposia with the British Society for Haematology and the European Haematology Association, its Mediterranean event serves to extend its education not only through southeastern Europe but North Africa and the Middle East as well. "Our international efforts are about much more than just a meeting," Reed adds. "We do them so that ASH education results in better care for patients, which also increases practitioner engagement with ASH."

To build the Highlights program, ASH's educational team compiles 15 topics from the annual meeting that have a strong research component along with practical applications. From there, "we reach out to annual-meeting speakers connected to those topics and get a commitment to participate in Highlights of ASH on at least two of the three weekends domestically," Nayer says. By doing that, ASH builds a small team of speakers for each topic who collaborate on a single set of presentation slides. Those teams then fan out to the six domestic locations with a common 45-minute presentation for each of the 15 topics.

Much of each international program is similarly based on annual meeting research, and presenters from the target region who have previous ASH event experience are recruited to present. International sessions are just 30 minutes each, and speakers are coached on their delivery to audiences whose first language is typically not English. (See sidebar below.) One wrinkle: "If there are specific diseases or conditions that are more prevalent in a region than in the U.S., we work with the hematology societies in the region to create content addressing those more deeply," says Reed.

Surprisingly, only a few ASH staffers go on site for each domestic and international Highlights event. "We used to send a lot of staff for on-site execution, but we are proud to have streamlined things such that now we only need to send one staffer from the education team, one from meetings, and one from corporate relations who works specifically with event supporters," Nayer says.

Reed notes that ASH outsources logistical elements to a meeting management firm in each region because "there are unique scenarios that exist that are more easily managed by people with deep local knowledge. This enables us to execute the events without being overburdened internally."

One big change ASH made two years ago was to contract with a single audiovisual provider for the annual meeting and all domestic Highlights events. This year, that relationship was expanded to the international events as well. "The presentation experience in the meeting room is so critical, especially for the international events, that we decided it was the best course of action," says Nayer.

This makes sense, given that the big-picture goal for ASH is "to be completely consistent with the ASH brand everywhere," Nayer says. "We want people who go to any Highlights event to experience not just a certain look and feel of the program, but also a certain style of customer service at an information booth or wherever else. We want to eliminate variables as we move from region to region." The examples he provides: An attendee at the Asia Highlights event asking a question about Wi-Fi connectivity on site will get the same information and interactive style as an attendee of the Chicago Highlights event and the annual meeting. "We address our consistency across events every year and fine-tune how we deliver every aspect—even online with our program guides, registration forms, hotel-booking pages, and frequently-asked questions."

When it comes to the financial impact to ASH, the domestic Highlights series delivers solid revenue. "While meeting educational needs about patient disease is our top priority, financial stability is important," Nayer says. Reed adds that "the annual meeting is growing so fast that we know the Highlights of ASH events can't keep pace with that growth. But in North America, we want to see profit on those in order to fund more programs within ASH."

With the three international events, though, there are other financial stakeholders and broader goals. "For each one, we do a split of expenses and revenues with the host country's hematology society so that the event can be a mechanism for them to reinvest in the hematologists there," Reed says. "We're comfortable with a break-even situation for ourselves to demonstrate our interest in developing hematologists in those places, and building our brand there too." That's evidenced by the fact that ASH works with each country's hematology society within a given region to match the number of trainees sponsored to attend the event.

One other key to the consistency that's found across all ASH events, even though it sacrifices potential revenue: No licensing of ASH content to outside organizations. "We're aware that some of our annual meeting and Highlights attendees will present our content within their own clinical institutions, and that's fine," Nayer says. "But we won't license other people to present ASH content beyond that."

"We chose this model intentionally," says Reed. "Licensing is definitely more efficient from a staff perspective, but from a branding and quality perspective we want to control the presenters of our content based on their past performance with us in order to provide exactly the same experience at Highlights. Licensing seems great on paper but then you don't control what goes on in the room. We made a choice to do something that's more difficult because losing control of quality is unacceptable to us."

For the planning team at the American Society of Hematology, it's tough enough to coordinate three Highlights of ASH events outside of North America over a matter of weeks. Add in the challenge of delivering condensed versions of content to audiences whose first language is generally not English.
"While English is the universal language of science, and the training of most medical practitioners involves a lot of English, we still have to be sensitive to the realities of each region," says Marshall Nayer, senior manager of meetings for ASH. With breakout sessions shortened to 30 minutes at international Highlights events from 45 minutes at domestic events, "the sessions simply can't cover all of the same territory," notes William Reed, chief event strategy officer for ASH. "Sometimes speakers think the solution is to talk more quickly, but then the audience is probably going to absorb less information."
As a result, ASH employs a two-part solution: Fewer slides per session and additional presenter training. "We get our speakers to modify their presentations so that the audience gets the information that will most benefit clinical application and patient care in that region," says Reed. "This includes simplifying some of the verbiage on each slide as well." With presentation styles, "we coach them to slow down and simplify what they are saying. It certainly is not easy or comfortable to coach such renowned people on how to present, but it has made a big impact on the usefulness of our content to local audiences."
In some cases, ASH chooses to provide simultaneous translation. For instance, when the Asia-Pacific Highlights event was held in Beijing, China a few years back, ASH translated presentations into Mandarin because attendance topped 1,300, versus about 800 in other years. And at the Latin American event, sessions are routinely translated into both Spanish and Portuguese regardless of destination. "We really focus on who will be at the event as we make these decisions," Nayer says.
TAGS: Association Conventions and Expos
0 comments
Hide comments
Related

Sponsored Content
Phoenix Is Just What The Doctor Ordered
Feb 01, 2020