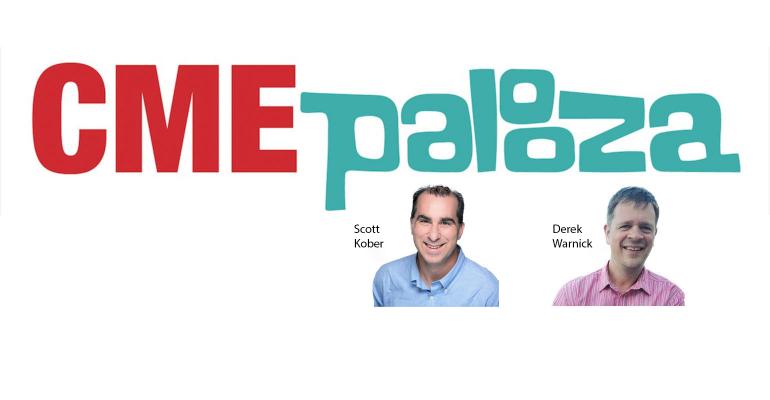 A Fun Approach to Serious Education

CMEpalooza mirrors the laid-back personalities of operating partners Derek Warnick and Scott Kober. And the growing number of people who attend the online event like it that way.

It was like a scene from a sitcom: Less than a week before his biggest work project of the year, Derek Warnick received a letter about jury duty scheduled for the same day as his online educational event. Even worse, the letter was the first he was hearing about jury duty. Fortunately, though, the letter informed him that it was being postponed. Otherwise, “I’d have had to skip it and be a scofflaw, and let them come after me,” he chuckles.

Actually, Warnick and his project partner Scott Kober sometimes seem like they really are in charge of a sitcom titled “CMEpalooza.” Their lighthearted and informal yet professional touch in delivering useful education to those who run CME programs is what appeals to many who attend the twice-a-year, one-day online event known by that name.

Warnick started CMEpalooza in 2014 for two reasons. First, “many people won’t go to industry educational events because of time and cost restrictions. I wanted to create a program that people in any position could learn from without having to worry about those things. The event is free, and will always be.” Second, “the experience that I and some industry colleagues had with the speaker-abstract process for other medical-educator events was frustrating—too many denials or big changes to your proposal. I wanted a program where anyone could present a topic they thought was helpful to people like them.”

There was a third reason, too: In early 2014, Warnick was laid off from his job at a medical education firm, so he took the time to master the Google Hangouts application in order to produce video sessions online without much effort or cost, or even the need for attendees to register. And though he found work with Pfizer as a grant-proposal manager soon after the inaugural CMEpalooza in March 2014 (he’s now senior manager, healthcare education), Warnick opted to continue the event. Fortunately, Kober, a laid-off medical-case-study writer at that time, attended the first CMEpalooza and offered assistance in running future programs. “Scott came on for the fall 2014 event,” Warnick says. “That was the first one where we had sponsors, so it finally felt real.” Kober also chose to continue with CMEpalooza after starting his own firm, MedCaseWriter Inc.

After five years, CMEpalooza has made its mark among CME providers. The spring 2019 event saw 650 people attend at least one of the seven 55-minute sessions that run consecutively throughout the day, while the opening session had nearly 300 attendees.

How It’s Done
Using the WordPress blog application, Warnick and Kober post a bi-monthly blog to CMEpalooza.com that talks about possible sessions for the next CMEpalooza as well as other CME-related topics—all while making pop-culture references, corny jokes, and “shout-outs” to specific readers. More than 500 CME providers have signed up to receive e-mail alerts for new blog posts. Then “we announce our agenda three months out, ramp up our blog posts about two months out, and in the last few weeks we’re posting three times a week,” Kober says.

To build the content for the spring event, the duo solicits proposals from the CME community; for the fall event, “we come up with the topic and invite presenters and faculty to participate,” says Warnick. “We have never gotten an overwhelming number of abstracts where we have to sit for days and pick through them, but we get more than enough. We also have two ‘Gold Sponsor’ sessions where they work with us to develop a session of their own and conduct them around lunchtime on the East Coast.”

Topic themes are fairly consistent each year, but “we just spin them a bit differently or use a different presentation format each time,” Kober says. “Driving learning outcomes for CME participants is a big one, as is how to acquire and report data from CME activity.” Warnick adds that “we’ll do sessions related to accreditation standards or regulatory guidelines, and anything related to grants is popular: What are the things the pharma companies are looking for so they will say ‘yes’ to funding a proposal?” And because Google Hangouts is connected to YouTube, sessions are archived almost immediately after they conclude, and are categorized by topic across all five years of sessions.

Interestingly, Google Hangouts is not the place where attendees watch the event; instead, they watch the live feed that Kober and Warnick produce on the home page of the CMEpalooza website. Though it’s a blog application, WordPress supports video streaming in a one-click format for participants. 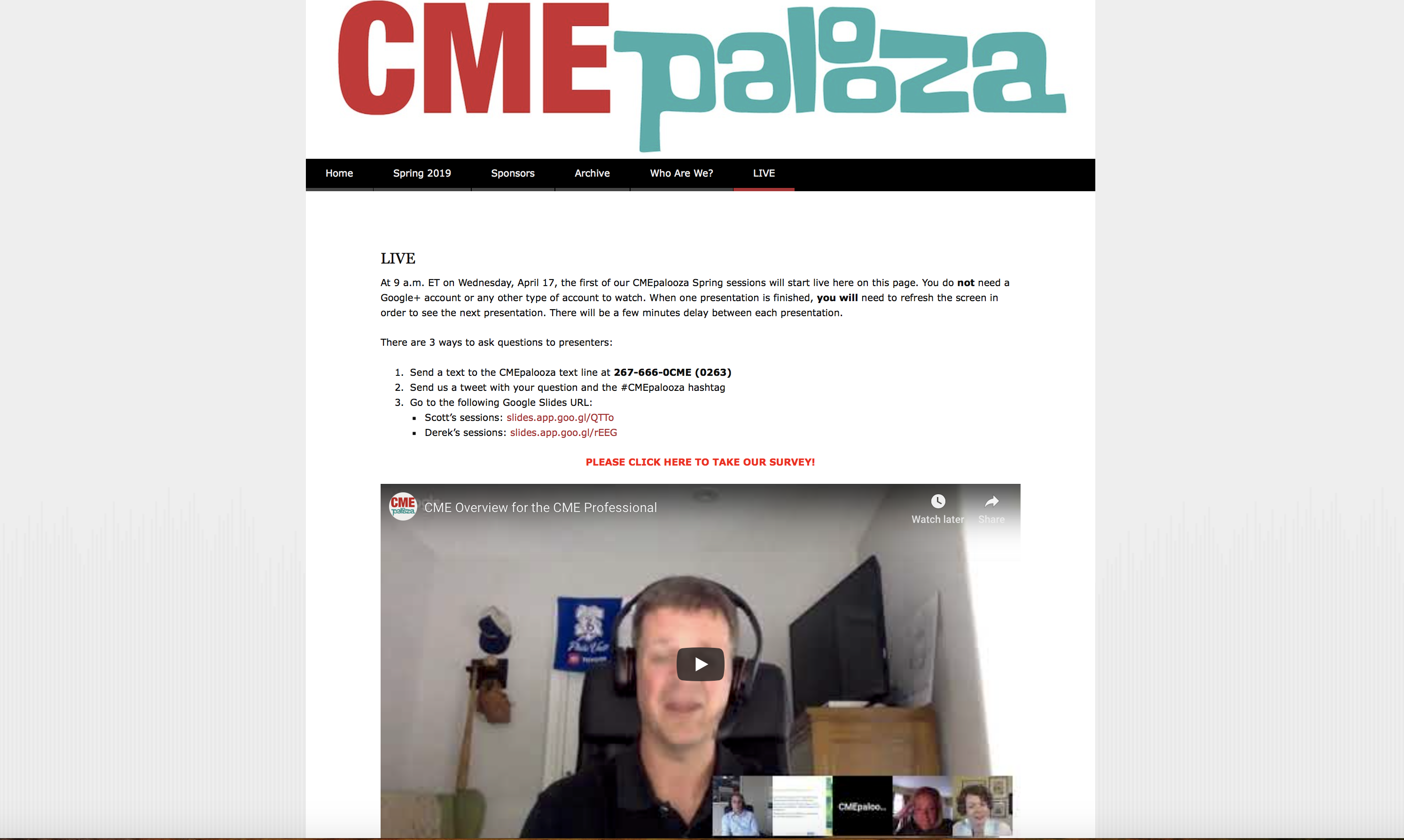 Because the coding for each video link must be placed into the duo’s single WordPress account, sessions have five minutes in between to allow Warnick to exit and for Kober to enter and add the new code, and vice versa. “Having two people run an all-day event like this makes much more logistical sense,” Warnick says. “One of us is running and troubleshooting a session while the other is prepping and testing the technology for the next one.”

One thing that Google Hangouts influences in a positive way is session formats. “Because it is video based, using a slide deck is not ideal,” Kober says. “We learned that most sessions must be panel-based discussions. We have not had a lone session presenter for the spring event in a few years now.” Up to six people can be on a panel; “at the bottom of the screen, each panelist is in a little square, and Derek and I control the feed of the large center box to focus on whoever is speaking at that moment.” He adds that they conduct a brief Hangouts tutorial with each panelist a few weeks out.

Because there’s a delay of several seconds in a Hangouts broadcast, interaction between panelists and attendees takes place only through a Q&A widget and Twitter. “People are interested in audience-response systems, and we even did a session this past spring on using them at your events,” Warnick says. “But our technical setup limits us a bit.” Then again, one session at the spring event used Poll Everywhere to good effect, so “we could work with that more at upcoming events.”

Attendee Feedback: Good Education, Good Fun
“A lot of people say they enjoy the blog during the year and then the events because it’s clear that we don’t take things too seriously,” says Kober. “If there is a production glitch, we don’t hide it. We’re just self-deprecating about it.” What’s more, the liveliness of the panel interactions is enhanced given that faculty might be willing to say a bit more in a setting that’s less formal than other conferences. “As a result, people tell us, ‘You guys seem to have so much fun with this, and you make me laugh too.’ Of course, we are trying to develop meaningful education. But we are not suit and tie people and we won’t come across that way.”

“I do think people appreciate that they can watch it from wherever they want, and that the informality means they can relax as it’s happening,” Warnick adds. “The word we get most often is ‘refreshing,’ so it has resonated pretty well with the CME community.”