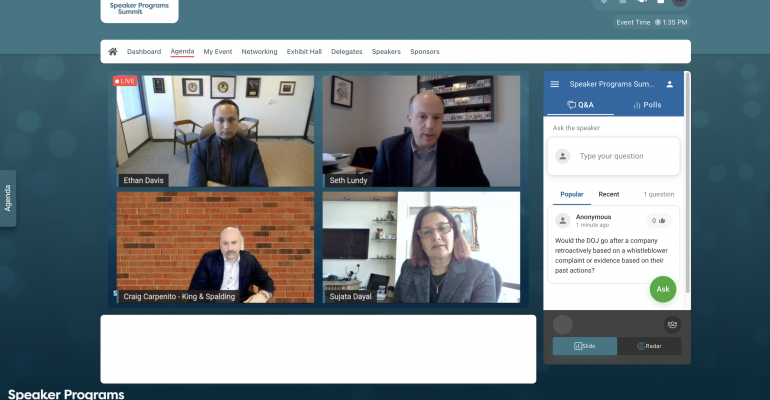 Industry attorneys and others say the recent OIG Fraud Alert reinforces the need for planners to be wise about food and beverage offerings, and even venue selection, when engaging practitioners. Here is their advice.

During the February 15-17 Speaker Programs Summit hosted virtually by Informa Connect, the hottest topic of discussion among the healthcare-event planners, compliance officers, and legal experts in attendance was increased scrutiny from the U.S. Health and Human Services’ Office of Inspector General, after that office used a special fraud alert in December 2020 to specifically call out speaker programs.

It became clear during the virtual conference that healthcare-event planners are especially focused on the potential for increased scrutiny of HCP-program elements now that in-person meetings are starting to return from the Covid hiatus. The reason for the heightened awareness, according to Seth Lundy, partner, FDA and life sciences, for King & Spalding LLP: “This is the first time in my years of practice that I've seen an OIG statement that in some ways directly contradicts things that are condoned by the PhRMA and AdvaMed codes.”

As a result, “PhRMA and AdvaMed will try to regroup and realign with what the thinking of the government is, because those codes are meant to be prophylactic measures to set baseline activities that should not be subject to the anti-kickback statute.”

A central factor that likely drove the fraud alert, according to Craig Carpenito, partner at King & Spalding LLP, was the $678 million settlement in July 2020 between Novartis and HHS regarding some of that firm’s “lunch-and-learn” programs that were investigated by OIG. In addition, “what I think is really compelling about the use of a special fraud alert here is that it's not so much that [HHS] is trying to put out guidance...To me, it's catnip for whistleblowers and for plaintiff's counsel,” he said. “I think the purpose of the alert is to be an inducement and invitation to salespeople at other companies—to say, ‘If you are seeing activity like this going on, not only is it something that we think is wrong but this is something you can get paid for.’ It's an advertisement.”

Tips for Planners
Given that analysis of the present landscape, it’s understandable that those involved with speaker programs are looking to be more vigilant than ever, and a February 16 virtual session provided planners with some good advice. First, Lundy said to “think more about the messaging for any speaker program, training program, or a lunch-and-learn program. How is it being communicated—what is being emphasized? Is [the message] mostly about the meal or the location? Is it ‘come to this steakhouse’ rather than ‘come to learn about this particular content.’” If so, the message should be revised to focus on the latter.

Also, the agenda for an event matters. Specifically, “what's actually happening during the program,” asked Lundy. “Is it a three-hour meal for a 20-minute presentation?” Such an agenda might need to be re-evaluated.

In a different virtual session held February 15, Julie Ritchie Wagner, senior assistant general counsel for PhRMA, presented this question to the planners in attendance: “Has the science or the data changed enough that there is a bona fide educational need that makes this program meaningfully different from the one that HCPs attended previously? That’s a product-by-product determination.”

One interesting possibility for reinforcing a product’s benefits: Hosting different speaker programs for different people within each medical practice. “Our work group had a lot of discussion about that,” PhRMA’s Ritchie Wagner noted. “There could be a different conversation with each person in an office—a scientific conversation with the physician, but then you talk to support staff about the company’s patient assistance program for that product or about other issues. We wanted to allow a little bit of flexibility for companies to have targeted conversations that are appropriate to each person’s role in an HCP’s office.”

Ritchie Wagner also said that the OIG’s fraud alert has areas that must be interpreted a bit more widely in order to execute an event, but still demonstrate compliance. For instance, “the alert expresses concern about alcohol being ‘available,’” she noted. “But if the hotel’s bar is two floors below your meeting room, does that mean the property is inappropriate for your event? This was one area where we decided to deviate slightly from the special fraud alert.” As a result, the PhRMA code states that “alcohol should not be paid for or provided by the company.”

Nonetheless, on-site enforcement by the host company is a must. For instance, “what if a doctor walks into your room with a drink in his hand that he got from the bar,” asked Ritchie Wagner. She advises that host companies “account for such situations with clear procedures. The company can monitor what’s happening at each event in a way" that is not identical to OIG’s language but still be compliant with PhRMA and AdvaMed codes, which goes a long way towards defending a particular speaker program.

On a related note, Ethan Davis, partner at King & Spalding LLP, answered an attendee’s question during the February 16 virtual session that healthcare planners should be thinking about: Does the federal government generally hold a firm’s compliance department responsible for compliance lapses by sales reps?

Mayo Clinic Research & Education Facilities Coming to Valley of the Sun
May 18, 2022