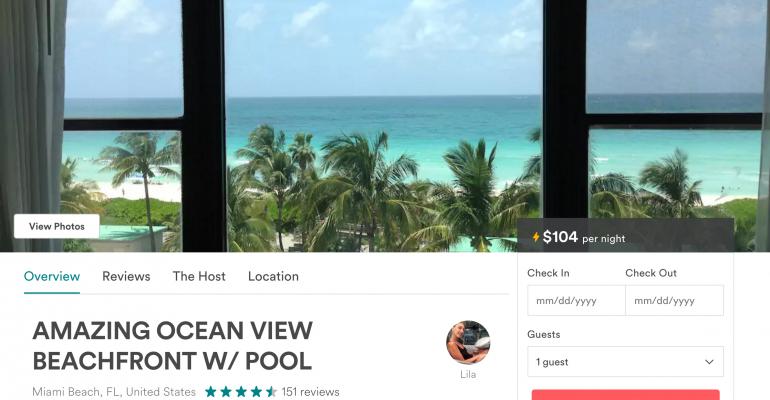 An Airbnb listing in Miami.
Association Conventions and Expos>Housing

Does New Report Prove Airbnb’s Image Is a “Fairytale”?

Airbnb has a reputation for being a personal lodging option. Ads for the home sharing service show visitors enjoying local culture as guests in homes where hosts are on site or close by. There is a hint of adventure, of an experience that is somehow more authentic than a traditional lodging. A new study released by CBRE Hotels America suggests that this image lacks authenticity, and the hint of adventure might actually be hosts circumventing stringent safety laws that apply to hotels and other multi-unit lodgings.

“Hosts with Multiple Units—A Key Driver of Airbnb Growth” looked at bookings from October 2014 to September 2016 in the 13 largest Airbnb markets in the U.S. It found that 81 percent of Airbnb’s U.S. revenue in 2016—$4.6 billion—came from whole-unit rentals where the owner is not present, rising from 78 percent the year before.

The markets with the most multi-units are Miami, Oahu, and New Orleans, but two markets where multi-unit hosts are not on the rise are New York and San Francisco, both cities that have regulations governing short-term rentals. The study found that hosts renting out two or more units generated more than $1.8 billion in revenue in 2016. Hosts with 10 or more properties generated $175 million, and hosts with 20 or more units generated $76 million. If 20 units sounds like a hotel remember that as Airbnb short-term rentals those units are not subject to commercial zoning or health and safety laws.

She says, “This report provides a stark contrast to the picture that Airbnb presents to policymakers and the public. It appears that Airbnb is actively supporting this commercial activity rather than trying to operate within the boundaries of the law.”

Airbnb’s fueling its expansion through multi-unit hosts not only puts guests at risk, but also hurts affordable housing for families by driving up prices and introducing commercial activity in residential neighborhoods.

In Miami, where 57.9 percent of Airbnb listings are from multi-unit hosts, Mayor Tomás Regalado has proposed a measure to further crack down on commercial short-term rentals by prosecuting hosts, and the mayor of Miami Beach, Philip Levine, tweeted that the commercial end of the home sharing app is “destroying neighborhoods/buildings w/ short term rentals in Miami Beach.”

Miami Beach currently has the highest fines in the U.S. ($20,000) for illegal hosts, and has raised almost $5 million from fines since they were introduced.

Airbnb, which is now worth an estimated $30 billion and has over 3 million listings worldwide, issued a statement calling the report “misleading and inaccurate.” They point to their own economic impact report but have not specifically addressed concerns over multi-unit hosts.

While even critics of Airbnb admit that the original home-sharing version fills a hole in the lodging market and benefits private homeowners—even Mayor Philip Levine tweeted, “LOVE Airbnb but not in [Miami Beach]”— the war against the commercial expansion into multi-units could end up hurting single-unit hosts and Airbnb as a whole.