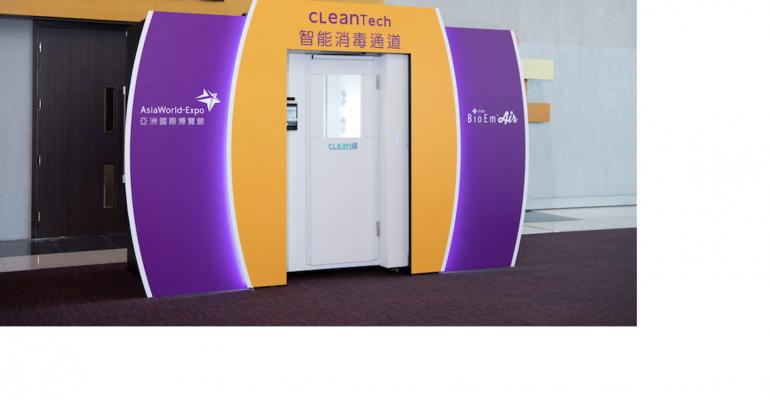 In an effort to reassure passengers and reduce the risk of contagion, airports investigate everything from spraying booths to robot cleaners.

Hong Kong International Airport is testing out a new booth to clean people who may have COVID-19 particles on them. A person steps into the booth and is sprayed with a sanitizer while in negative air pressure, in the hope that virus particles will be sucked off them as air is filtered out, and the disinfectant spray will kill any microbes left on their clothes, skin, and hair. The CLeanTech booths were first developed and introduced at the exhibition venue AsiaWorld-Expo, in Hong Kong, and several U.S. companies are working on introducing similar machines for use in a variety of venues.

At the moment, the booths are being used to sanitize airport staff to see if they reduce the risk of infection. Despite gloves and masks, airport workers are particularly vulnerable to the virus because of their exposure to so many travelers. In the U.S., more than 500 Transportation Security Administration employees have tested positive for the virus, and a worker at Newark’s Liberty International Airport has died.

If the test is successful, passengers could be asked to step into the glassed-in kiosks before boarding a plane or leaving the airport to reduce the likelihood of transmission. It is not yet clear how the CLeanTech machines could be incorporated into other airport security procedures, such as X-rays.

Airports everywhere are rushing to introduce technology to reassure wary passengers, including cleaning robots, thermal cameras that check visitor and staff temperatures as they move through the terminal, and machines that monitor blood oxygenation and respiratory rate. In an attempt to introduce “touchless” travel, passengers will likely scan their own boarding cards at automated gates and weigh and drop off checked bags themselves.