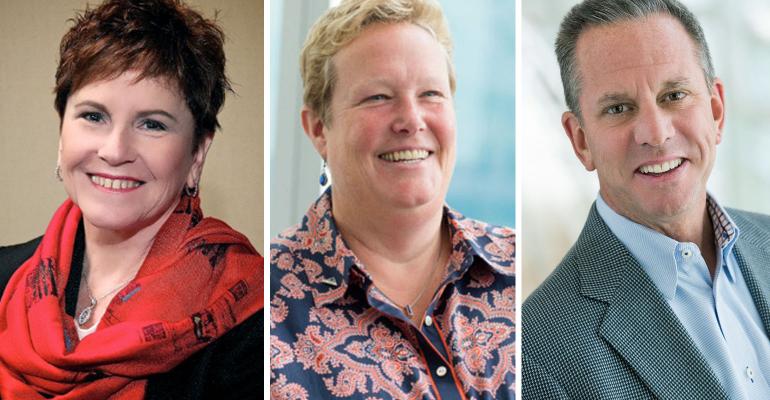 Events professionals Roscoe, Sperstad, and Peckinpaugh to be honored along with emerging leaders at the 2017 Hall of Leaders and Pacesetter Awards Gala at during IMEX America.

Three industry figures were recognized for their achievements today with the announcement from the Events Industry Council that they will be inducted into the Hall of Leaders at the annual Awards Gala during IMEX America.

Karen Kotowski, CMP, CAE, CEO of the Events Industry Council, said in a statement, “The recipients this year truly reflect the best and brightest stars of the events industry, and we look forward to honoring their legacy and leadership at the Gala event this fall.”

David Peckinpaugh told MeetingsNet, “I’m honored to be inducted into the EIC Hall of Leaders, and especially thrilled to be entering with Patti Roscoe who I started working with back in the early days of PRA. Looking at the list of past recipients, it is humbling to be included among their ranks. As we all know, a career is built not just by the individual but through collaboration with family, bosses, co-workers, and colleagues. I look forward to celebrating with all of them in October.”

Janet Sperstad was also thrilled by the recognition. She said, “It’s been my life’s work to elevate the profession, and I do the work because there is work to be done, but to be honored like this it just stopped me in my tracks and took my breath away!” As an educator Sperstad tries to prepare her students for a competitive employment market. She shared her best advice for people starting out in the industry. “You have to know your work and create your own opportunities, I always tell students to listen to the nos and follow the yeses.”

Patti Roscoe called the decision to induct her into the Hall of Leaders, "a stunning honor." She said,  "Thank you to SITE and all who felt I deserved to be part of the prestigious EIC Hall of Leaders. To be recognized by one’s peers is an unparalleled honor.  It became more magnified when I realized my name would be included with the current and past recipients, all industry leaders I so admired. I’ve loved my career and the PRA team that was there along the way. I share this mark of distinction with them all."

The 2017 inductees join 114 industry figures honored since the Awards were introduced in 1985.

The 2017 Hall of Leaders and Pacesetter Awards Gala will take place on October 10, 2017 in Las Vegas, Nevada, and will also recognize pacesetters, industry figures who are emerging leaders and supporters. Pacesetter Dan Berger of Social Tables will be recognized for his contributions in leadership and innovation; Guy Bigwood of MCI Group is being honored for his efforts in sustainability and social responsibility; and Mac Campbell of Baltimore Convention Center will receive the Young Professional award for his record of foresight and innovation making an impact on the industry.

Kotowski said, “Honoring where the events industry comes from, as well as the exciting future we have ahead of us, is what makes this award celebration so special. I am proud to be able to announce the individuals who will be in the spotlight for this event.”