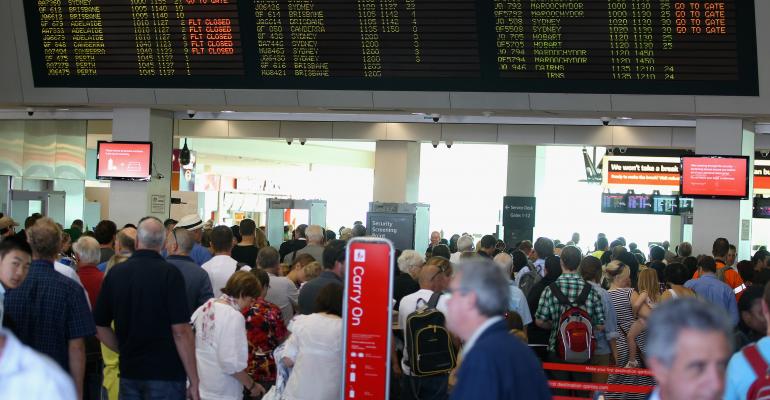 For $100 you can skip to the front of the security line and, depending on the airport, queue jump at border patrol, too.

Have you ever wanted to be Kim Kardashian? No, actually, neither have I, but I would like some of the perks of being rich and famous, especially getting VIP treatment at the airport. A new service from Blacklane is offering exactly that, but at a price that won’t break the bank for the average traveler.

Blacklane Premium Airport Services & Solutions offers a number of concierge services such as help with bags, access to an airport lounge, and a personal escort between connecting flights, but it is also offering the greatest gift a flyer could ask for: the opportunity to skip to the front of the security line.

Average wait times at U.S. international airport security lines are now 40 minutes, but at peak times the wait can be over two hours. Trusted traveler programs are no longer a guarantee that wait times will be shorter. More than 25 million travelers are expected to be enrolled in TSA Precheck by the end of 2019 and already its lines are only just shorter than regular ones. Wait times at airports including London’s Heathrow and Schiphol in the Netherlands are so long that even trusted travelers are advised to get to the airport three hours early.

While some airlines offer expedited security as a perk for travelers with first-class tickets, Blacklane PASS agents escort flyers from any ticket class to the front of the security line for a flat fee of $100 per person. That’s only slightly more than an upgrade for four more inches of legroom with the main U.S. carriers. For passengers with connecting flights who need to go through security at each hub, $100 is a minimal investment compared to the cost of a missed flight and business meeting. For the rest of us who are just tired of standing in line, it’s an affordable treat, often coupled with access to an airport lounge and an escort to the gate, so that we can have a first-class airport experience even though we are flying coach.

So, how is Blacklane offering this service? Jens Woltorf, CEO and co-founder of Blacklane, explains. “We have partnered with VIP concierge firms at most of the 500 airports Blacklane already serves with ground transportation. A credentialed agency or airport employee can escort the passenger to a special security line, or to the front of a regular line, and will make sure they have no liquids or items that will slow them down when they pass through.” While concierge agencies routinely fast-track business leaders and celebrities through security for a higher fee depending on the airport, Blacklane PASS is democratizing the service by making it available for people on a tighter budget flying in any class. The flat-rate fee can be a huge saving over a boutique service. For example, to skip to the front of the line in Moscow usually costs $700, and in some Scandinavian airports the fee is more than $900.  Local partners are often subsidiaries of the airport, but they can also be private companies such as Perq Soleil. Tinu Ige, CEO and managing partner, says the Perq Soleil offers expedited security service at Washington Dulles, Ronald Reagan National Airport, Baltimore-Washington Airport, Miami International Airport, and 40 others. She says, “We don’t break any rules. Our clients go through security, but we have badged employees in the airport who can take them through a different line. For example, it could be an employee line, or at certain airports the line used for travelers using wheelchairs.”

As well as offering an expedited service at departure, depending on the airport, Blacklane PASS can sometimes expedite travelers through customs and immigration on arrival. Woltorf says, “At some airports where the federal law forbids fast-track immigration lines, we have no magic source to make a miracle happen. We cannot do this at JFK, but our local partners in Boston and other airports can expedite those lines.” Ige confirms, “We can meet international travelers planeside at airports like Logan or Houston and take them to the front of the immigration line.” Ige has made arrangements for large groups of attendees arriving for meetings at the World Bank or the International Monetary Fund to speed through lines and says that she can work with a meeting planner to arrange for opening a new immigration line for large groups of people. The Incentive Research Foundation arranged for a dedicated immigration line at Cancun International Airport for attendees at a recent conference in Mexico, and there are other U.S. and European airports where Ige can provide the same service by prearrangement.

Woltorf says Blacklane began testing PASS almost 12 months ago and launched publicly this month. During the beta period, Blacklane worked with several MICE companies to streamline the security process for their clients. He says, “It shouldn’t be exclusive; their time is just as valuable as VIP flyers.” He expects the service to be popular because political events such as Brexit, which is expected to cause unprecedented delays at British airports like Heathrow next year, can make wait times at departure and arrival longer than the actual long-haul flight.

Flyers have access to Perq Soleil’s Heathrow partners through Blacklane PASS, and Ige confirms Blacklane offers the best deal for individual travelers. However, she also mentions that the flat-rate of $100 is per person and many concierge firms offer a discounted rate for groups of four or more, so it might pay to look at costs for larger groups and assess whether other perks such as golf cart transportation to the gate is included.

So, what happens if, like TSA Precheck, everyone signs up for Blacklane PASS each time they fly? Woltorf says, “If we end up in a world where the Blacklane queue is as long as the regular queue, then we will have been so successful that we will just have to innovate again. We need to help the airports better control waiting times and we will already have the data to speak to that.”