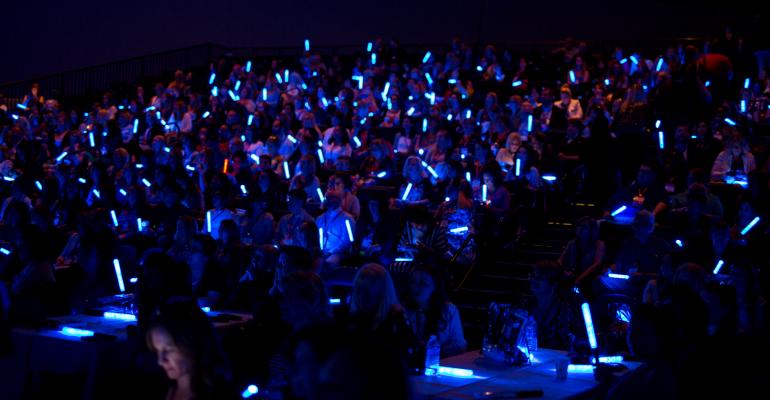 MPI
There's nothing like a sea of glowing lightsticks blinking in rhythm to get the party started.
Career/Life/Travel

MPI WEC18: A Few of My Favorite Things

Here are some of the things that I thought went really right at this year’s Meeting Professionals International’s World Education Congress—and a few that missed the mark.

Meeting Professionals International’s World Education Congress went from the very slick production of last year’s convention in Las Vegas, to a new format in a city that most of the people I talked to hadn’t been to before, much less held a meeting in: Indianapolis. And you know what? Sometimes, going into an experience with a blank slate of expectations leaves me more open to just take it all in. And this WEC ended up being a pretty memorable experience.

Here are a few of my favorite things:

• Indianapolis. I already went into way too much detail on how the host city geared up for WEC18 in this post, but I’ll just add that it was very cool the way the locale flavored everything about WEC this year, and I’m not just talking about the food (though that was amazing). From the airport lounge that greeted us to the closing event at the Indianapolis Motor Speedway, the city was a host par excellence. And, while I know this really wasn’t under the city’s control, the weather could not have been better. • The Indy Air Bears jump rope team at the Sunday pep rally. They were talented and adorable, and I never even knew competitive jump roping was a thing. The Indy Air Bears in action

But when they handed the ropes over to MPI President and CEO Paul Van Deventer and MPI board chair Amanda Armstrong and asked them to give it a whirl—and they did, pretty enthusiastically even—they brought out a playful side of MPI leadership that’s usually not center stage. Here's an action shot you won't see at many association meetings: Leadership jumping rope, rather well in fact.

• The MPI Heartland Chapter’s entry in the Chapter Rap Battle. While they won’t be giving Cardi B a run for her money moves any time soon, it was well choreographed, and the props put it over the top. The only thing missing was a mike drop at the end.

Just laid down the sick rhymez and won the #rapbattle at #WEC18 so proud of our #MPIHeartland chapter for representing! #dolladollabills pic.twitter.com/XOUdpqln5Q

• Sharing the pain. To illustrate how stuck in our ruts we all are, opening keynote speaker Dustin Garis asked audience members to stand if they’ve had the same haircut for five years, then 10 years. Reading my mind, a fellow curly haired woman behind me said, “It’s not like we have a lot of choices.” Thank you. Though I do wonder what happened to the guy who offered to cut his hair there and then—and someone started snipping away right there on the floor in front of the stage.

I have to put Garis himself as a lowlight though. While the LifeProfit “chief troublemaker” had a good message about how we need to “revolt against the routine” to create memorable experiences, everyone around me thought it was pretty mean to offer an audience member a free trip to Hong Kong if she’d drop everything and leave that night, then say he was just kidding and she is only getting a dinner at a local Chinese restaurant. He had sort of redeemed himself at the end by saying he actually was sending her on the trip after all—until we found out she was a shill and part of the act. Not cool. Opening keynote speaker Dustin Garis was a hit before he was a miss.

• Beth Ziesenis’ session on secret tech weapons. My colleagues have raved about speaker, author, and “your nerdy best friend” Ziesenis, but this was the first time I got to experience her unique style in person, and it just doesn’t get any better than this. If you ever have the chance to take in one of her sessions, run, don’t walk, to get a good seat! I learned about some cool tech tools—and how to make a breakout session interactive and fun—at a session led by Beth Ziesenis.

• This quote from MPI Chair Amanda Armstrong in one of the opening pep rallies: “Let’s start a cultural awakening. Let’s improve how we treat each other, starting here.” It set the tone perfectly for the emphasis this year’s WEC put on important, often difficult-to-talk-about topics such as ending sexual trafficking, harassment, and abuse; reining in unconscious bias; and designing events that are diverse and inclusive. • Seeing some of my favorite people, and meeting some new favorite people! Though it always bums me out to see posts from other people I know are at the conference but I never seem to be able to find. Oh well, there’s always next year in Toronto.

• The 34th Street pizza from the Brozzini Pizzeria food truck during the outdoor lunch on Sunday. While I probably ended up wearing more of the garlicky, cheesy, basil-dusted slice than I got in my mouth, it was so, so good. (See this post for more of my foodie faves outside of the meeting proper.) I didn't get a shot of the Brozzini Pizzeria food truck, but this is the general scene from that lunch experience.

• D.J. Warren Peace, who in addition to spinning crazy good dance music all night long at the Rendezvous MPI Foundation fundraiser, also has the best name of any D.J. ever. • The moment when the Lovoco instant captioning system went rogue and mistranslated something said during one of the pep rallies in a wildly inappropriate way. I feel sorry for the company, but it was funny.

• The choreographed light sticks at the pep rally sponsored by the Branson Convention and Visitors Bureau and Convention Center. We were having a blast just waving them around, but when the colors started changing in time to the music, the crowd let out a big, fireworks-level “ooh.” There's nothing like a sea of glowing lightsticks blinking in rhythm to get the party started.

• All the folks who turned flower child by wearing their DIY flower crowns at the opening celebration. Some of their creations were really beautiful, and it gave a festival feel to the gathering. • MPI applying “event design doing instead of just event design thinking,” as Ruud Janssen, DES, CMM, wrote in this LinkedIn post that outlines how MPI used the Event Canvas methodology to reinvent the meeting. (Click through to Ruud’s post for all the details—it’s a fascinating process.) MPI also asked participants if they’d be willing to volunteer to be a part of the WEC18 Experience Experiment, which entailed using the ExperienceFellow app to document and evaluate whatever struck them as noteworthy. I meant to sign up, then promptly forgot to do it, but more than 130 did, and I’m sure their feedback will fuel improvements for next year’s WEC in Toronto. My only real gripe about the show was that it was hard for me to find where I wanted to go, and then get there in time. While MPI did have a number of people trained to help guide people through the four topical “villages,” if you couldn’t find an “experience coach,” you probably spent some time wandering around looking confused like I did. The signage was lacking in some cases, and the room location on the app often was off the visible part of my screen so while I could figure out in which village a session was happening, where in that village it might be remained a mystery. I did manage to make the session David Lau gave on how to prepare for an active threat—it was SRO, and he was amazing. Totally different from Beth Ziesenis, but he is another person that if you get a chance to hear him, take it.

Also adding to my scheduling chaos was the 30-, 60-, and 90-minute session mix. I probably should have spent more time mapping out my educational plan ahead of time (ahem, it would have helped if the build-your-schedule function on my app worked pre-show—and/or if I had got in touch with one of the experience coaches pre-show instead of giving up on it until I was on site), but I found myself constantly arriving late, having to leave early, or having a weird block of time free that didn’t correlate to the start or finish of anything.

But enough about me: What were some of your most memorable moments?