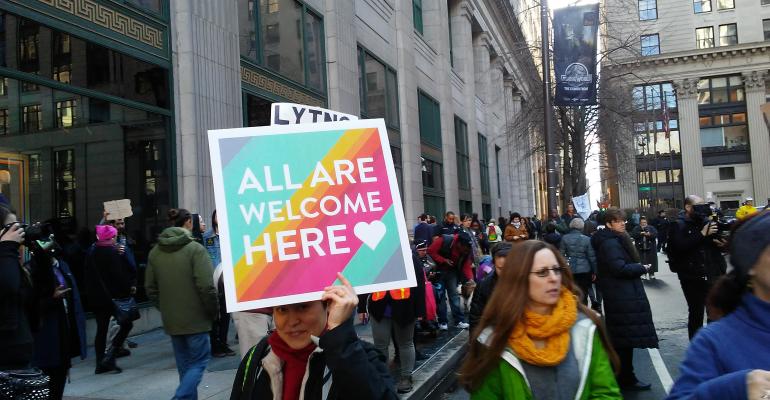 Are all your attendees welcome?
Career/Life/Travel

Meeting Planning in the Age of Activism

A Marriott hotel is asked to cancel a conference. How should the meetings industry deal with politics and protests?

On September 11 Muslim Advocates, a legal advocacy organization, sent a letter to the president and CEO of Marriott International Inc., Arne Sorenson, asking him to cancel a conference at one of his hotels.

The ACTCON2017 conference is scheduled to take place October 2 and 3 at the Marriott Crystal Gateway, in Arlington, Va. The group organizing the conference is called ACT for America, and has been characterized as an extremist group and the largest anti-Muslim group in the United States by the Southern Poverty Law Center. The founder and leader of ACT for America is Brigitte Gabriel, who has previously been quoted as saying that anyone who believes in the teachings of the Koran, “cannot be a loyal citizen of the United States.”

Jeff Flaherty of Marriott Global Communications and Pubic Affairs released the following statement concerning the letter: “We are a hospitality company that provides public accommodations and function space. Acceptance of business does not indicate support or endorsement of any group or individual.”

It is clear that Marriott cannot cancel a legally contracted conference at such short notice, so it is probable that the letter from the Muslim Advocates was an attempt to put pressure on the hotel chain’s future business choices. The letter is just the latest example of the partisan nature of doing business in 2017, and it highlights an issue that meeting planners need to be aware of: If the Muslim Advocates can request a hotel to cancel a conference for one group, other organizations are undoubtedly putting pressure on hotel chains to cancel conferences for other groups. Planned Parenthood is one politically charged group that springs to mind, but almost any organization has its detractors; think about cosmetics companies and animal rights activists, or even cartographers and the Flat Earth Society (yes, it’s a thing).

As meeting planners you have enough to worry about without having your constitutionally protected right of assembly questioned by someone on the other side of the political spectrum. Unfortunately, increased activism can have an impact on your meeting, forcing you to address issues such as security concerns posed by protesters, and increased security costs to cover them. Should the venue or the client pay for the additional costs? And what happens if you plan a meeting at a venue and you arrive to find that the property is also hosting a meeting for an organization your attendees might find objectionable? Or a protest group for the other organization targets your attendees by mistake? It is highly questionable whether hotels can legally turn down a group based on its political affiliation, but do they have a responsibility to inform clients about potential conflicts?

For meeting planners, choosing a venue where every attendee will feel comfortable is getting a little more complicated.