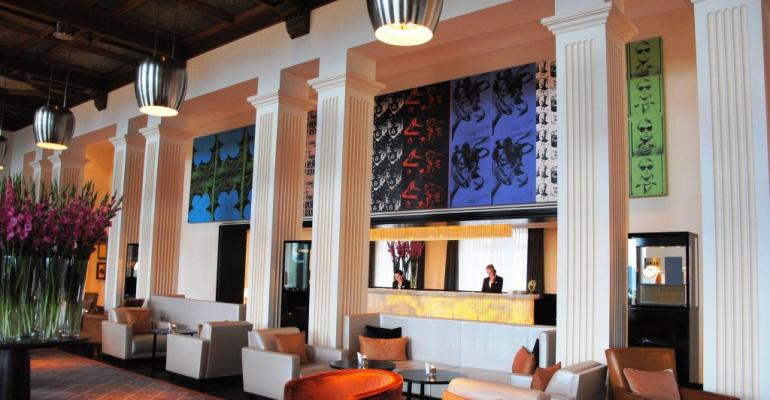 A Warhol hangs in reception.
Career/Life/Travel

If you are planning a trip to the five-star Dolder Grand Hotel in Zurich you may be disappointed in the quality of the art on display. Since 1899 the chateau-style hotel has attracted guests to its elegant turrets, situated on a hill overlooking Lake Zurich and the city. Following a $450M renovation by Lord Norman Foster and partners completed in 2008, the hotel became what Forbes Magazine called an “art mecca,” showcasing works by Joan Miró, Andy Warhol, Salvador Dalí, Takashi Murakami, and Henri Moore, among others. Owner Urs E. Schwarzenbach displayed more than 100 pieces from his private art collection around the property, including Warhol’s Big Retrospective Painting in reception and Ferdinand Botero’s Woman with Fruit on the pool terrace.

Unfortunately for guests hoping to combine a luxurious stay with some museum-quality art viewing, 30 of the works were confiscated last week by Swiss customs officers over a tax dispute with Schwarzenbach. Although works by Jean Dubuffet, Niki de Saint Phalle, and Miró are thought to have been removed from the hotel, patrons can console themselves with Sylvester Stallone’s 1989, Best of Life in the lower lobby.

Let’s hope none of the paintings suffer the fate of Picasso’s La Rêve, which hung without incident in the lobby of the Wynn Las Vegas until it was removed for sale and suffered a puncture wound from owner Steve Wynn’s elbow during a private showing.