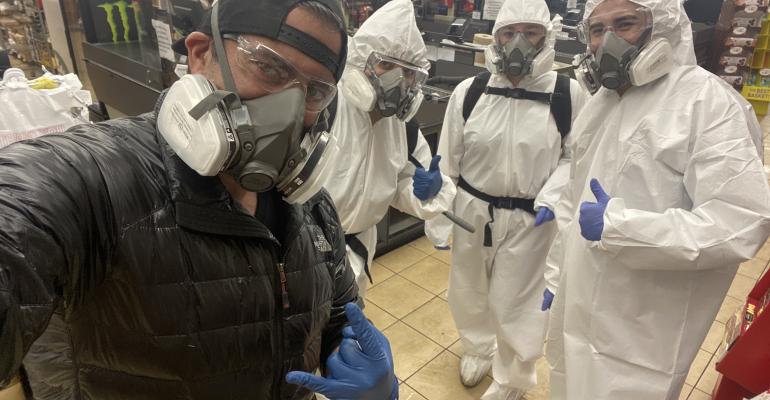 One event planner uses his skills in procurement, logistics, and client services to stay in business.

The Platinum Events Facebook page has testimonials from people who were thrilled by the company’s production for weddings and fundraising events. Alongside those are more recent recommendations for Platinum’s work sanitizing restaurants and grocery stores—the company’s new line of work.

As an event planner, Justin Jacobson, the Northbrook Illinois-based Platinum’s owner, has expertise in procurement, logistics, and knowing what a client needs, so as others were stockpiling toilet paper, he was ordering decontamination and cleaning supplies.

This is not the first time Jacobson has adapted his business to stay afloat. An entrepreneur since the age of 19, he began running a high-end DJ, lighting, and sound company 15 years ago.  When the crash of 2008 happened, returning clients had $1,500 budgets, instead of $15,000. Jacobson went knocking on doors to expand the business to include conferences and meetings for corporations. Although Platinum still produces weddings and Bar Mitzvah celebrations all over the country, it has also been behind large events such as the V.I.P lounge experience at the Grammys and the Allstate Cares event at Allstate Arena.

Jacobson says, “We have a lot of clients in Los Angeles, and when we started getting postponements, I knew something was happening about a week and a half before it happened in Chicago.” He saw his four-year-old son and two-year-old daughter playing with mops and brooms in his office and realized that sanitation was a necessary service. Having worked in different venues for events, from lavish ballrooms to massive arenas, he researched appropriate chemical supplies for different facilities and applied for certification.

Attention to detail is the hallmark of most meeting planners and Jacobson focused on the health and safety of his staff. “We’re dealing with people’s lives here. My employees need respirators not N95 masks.”

More than half of his staff of 15 chose to stay on working in the new sanitation business, while a few dropped out for health reasons.

Jacobson intends to continue the sanitation business even when live events pick up after the pandemic. He says, “I really do feel that if we are there for businesses and families in times of celebration then it is my obligation to be there for them in times of crisis.”

Click here for an ABC News story and video.