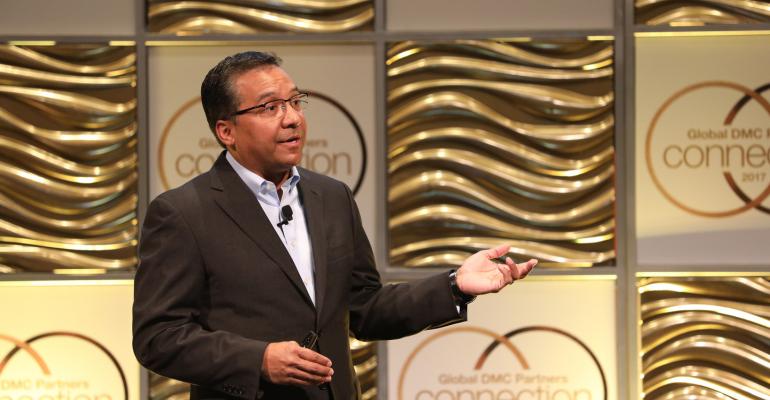 eSports and Ballrooms: What the Meetings Industry Needs to Know

MGM’s Michael Dominguez highlights the challenges and opportunities in the Fourth Industrial Revolution.

Michael Dominguez’s keynote speech at a client event for Global DMC Partners, entitled, “A Year of Disruption,” had two major themes:  the pace of change and the need to check the data before believing the headlines. Dominguez, chief sales officer for MGM International, offered as an example the fact there had been no sign of the drop off in international visitors to the U.S. that newspapers and pundits had predicted after the immigration ban made headlines in March.  That was the last week of August. The first week of September brought a real-world demonstration of the pace of change and the need to absorb new data when the U.S. Travel Association’s Travel Trends Index showed that, in fact, there has been a drop in international inbound U.S. travel and the trend looks set to continue. This reversal proved Dominguez’s point: The pace of change is faster than at any time in history. A striking visual example of what Dominguez calls the Fourth Industrial Revolution in his presentation was two photos, both taken in St Peter’s Square, Rome. The one taken during the inauguration of Pope Benedict in 2005 shows one flip phone being used to take a photo, in 2013 for the inauguration of Pope Francis, the entire crowd is holding up a smart phone or tablet to record the event. (See images below.)

Dominguez warned that technology is changing fast, “Think of Borders, Blockbuster, RadioShack, and never say ‘that can’t happen to me.’”
For the hotel industry, the global outlook is good. Dominguez said RevPAR is up in every major region except South America and the Middle East. Economic problems in Brazil and Venezuela are dragging down growth numbers in South America, where other markets such as Argentina are growing, and fears of terrorism and political unrest are affecting the Middle East. Hotels in these places are struggling, making them a potential long-term opportunity for others. According to Dominguez, the most exciting market to watch is Africa, where both supply and demand are growing faster than other areas.

In the U.S., Dominguez said room demand has outpaced the economy for the last five years, far outstripping supply even though the GDP is down in relative terms.

He said, “In the U.S., we are occupying almost 66 percent of all rooms and that has never happened before.” He cautioned to read data in context, “The media says occupancy is slowing down and it is, but look at the rate of increase! We are still growing even though the pace is slowing a little.” Dominguez pointed out a major disconnect in the market: High-end hotels are doing better than midscale to economy hotels, but most of the hotels being built right now are limited service, don’t have restaurants or room service, and have very little meeting space. Dominguez blames the banking crisis, saying that financial institutions won’t take risks on meeting hotels; they will only give loans for low-service hotels. Group bookings are up more than 3 percent and transient bookings are up about 36 percent, so to investors it may look as though meeting hotels are not an industry driver. But according to hotel analytics company STR, that 66 percent average room occupancy is derived from an average of 74 percent room occupancy in luxury, upper upscale, and upscale hotels; a 67.1 percent occupancy in upper midscale hotels; and 59 and 57.3 percent occupancy in midscale and economy hotels respectively.

He said, “[The U.S.] opened about 90,000 rooms in the last 17 years, and closed about 32,000 rooms in the same period, so it looks as though we are building inventory. But the challenge is no one is building ballrooms.”

What the Meetings Industry Needs to Know
1. Planners are going to have to be more flexible than ever on space, dates, and location as it gets harder to book the right venues.
2. Planners are not just competing for space with other meetings and conferences anymore, gamers (yes, computer game players) are pushing you out of the way. Dominguez said eSports are a huge market for MGM, and it is not a fad. He said, “We make a lot of money in nightclubs, but we just shut down LAX nightclub at Luxor so we can build a permanent eSports arena. Gamers are not going away and they have a lot of money.” Not only are planners competing for spaces with gamers, they are going to have to be aware of big eSports events just like the NFL and other sports when they schedule their own meetings.
3. Planners need to rethink security in the aftermath of the Manchester, U.K., terrorism attack. Dominguez said it is not enough to plan for security inside the venue, the attacker in that case was outside. For large events, he said security will have to encompass a perimeter around the venue and scrutinize entry arrangements; long lines of people are particularly susceptible to vehicular attacks. He described being in Boston during the free speech rally this summer and seeing large trucks parked around police barricades to protect crowds from cars ramming into them.
4. Cybersecurity is your responsibility, too. If you are still asking about free Wi-Fi, you are behind the times. Dominguez said, “The best advice you can give any attendee is to stay off free Wi-Fi.” He said you can probably get away with checking the weather, but never handle any transactions, including your registration transactions, using anything but a dedicated line.
5. New industries can be good for traditional industries. Dominguez gave the example of Airbnb. He said that the average length of stay at an Airbnb is seven days, versus two or three days in a hotel, so they are not directly competing at the moment. But Airbnb is making in-roads in Vegas because it sells households versus single rooms, and bachelor parties and other social events are attracted to that. That might be a direction that hotels want to investigate in the future. But MGM is currently negotiating with Airbnb because it is a channel and could sell rooms for hotels just as easily as for private homes. Dominguez said Airbnb is not threatening hotel prices, take a look at Airbnb rates in San Francisco and New York City, they are comparable to hotels.
6. The way to survive in business right now is not to make any assumptions. Some examples from Dominguez: Amazon is opening bricks and mortar bookstores carrying its bestsellers, and sales of vinyl records are exploding because Millennials are buying them in droves. He suggested that focusing on demographics will lead business astray. Behavior is more important than age, and who could have predicted that Millennials, the digital generation, are using travel agencies more than Gen X?
Dominguez’s final comments emphasized how important meeting planners are in the Fourth Industrial Revolution. He said, “Face to face is never going to die. We just hosted 16,000 attendees at the Cisco National Sales Meeting. These are the people who sell the virtual technology to get away from face to face.”

Why Hotel Negotiations Are Like a Game of Tetris
Sep 13, 2017

Creativity Roundtable: Ideas to Adopt, and Dated Ones to Drop
Aug 31, 2017