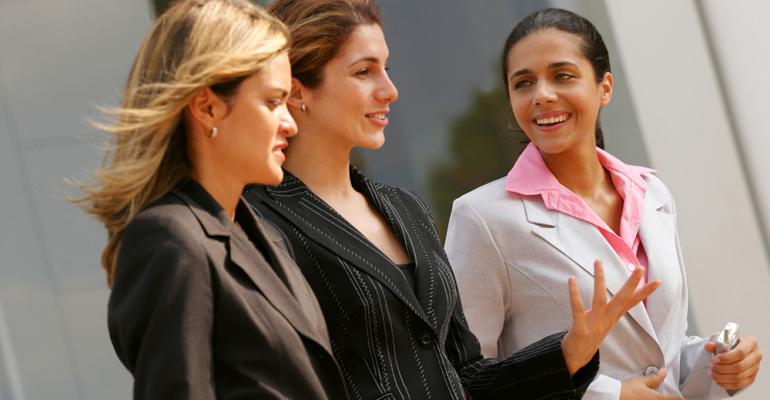 Is Your Professional Network Too Female?

“Women in the Workplace 2016,” the latest release from a comprehensive long-term partnership between LeanIn.Org and McKinsey & Co., reveals that women are still underrepresented at all levels in the corporate pipeline, and that the disparity grows at each step closer to the C-suite.

But the research looked beyond the numbers to the workplace experiences of women, and some of the results may hold the key to more gender-balanced corporate structures. For example, while both women and men view sponsorship by senior leaders as important, the report states, women interact less with senior leaders than men do. Women are also less likely to say that a senior leader outside their direct management chain has helped them get a promotion or challenging new assignment.

Why? Partly because women are more likely to network with other women—who are, at this point, less likely to be the senior leaders with power to influence their career paths. “Women are three times more likely to rely on a network that is mostly female,” the report states. “Because men typically hold more senior-level positions, this means women are less likely to get access to people with the clout to open doors for them.”

Line or Staff?
Another challenge for women aiming for the C-suite is that, as they advance, they often end up in “staff” roles as opposed to “line” roles, which essentially puts them out of the running for the top job. As the report explains, “Line roles are positions with profit-and-loss responsibility and/or a focus on core operations. Staff roles are positions in functions that support the organization like legal, human resources, and IT.” In 2015, 90 percent of new CEOs in S&P 500 companies were promoted or hired from line roles, and 100 percent were men, according to data collected by SpencerStuart.

They’re Gaining
In entry-level jobs, the gender split is almost even: 46 percent of these jobs are held by women and 54 percent by men. But the divergence happens fast, with 63 percent of manager positions filled by men and 37 percent by women.

It should be said that at each of these levels women nevertheless made small gains (one or two percent) over the 2015 numbers. Another reason for optimism, according to the study: “The percentage of women being promoted into middle and senior management is higher than the percentage of women currently at those levels. If this pattern holds over time, the representation of mid- and senior-level women will slowly increase.”

Reality and Perception
The study asked about the workplace environment as experienced by male and female respondents. Fewer women than men report that they’ve been given a challenging assignment in the past two years or that they’ve been asked for input on important decisions. Fewer women than men believe that their contributions are valued or that they are able to participate meaningfully in meetings. And fully one-third of women agree with the statement that their gender “will make it harder to get a raise, promotion, or chance to get ahead.”

Part of the reason for the LeanIn.org/McKinsey & Co. partnership is to move that process along, giving companies “the information they need to promote female leadership and gender equality in the workplace.” Here is the report’s path to improvement:

1. Make a Compelling Case for Diversity
Companies should explain to employees the positive impact of greater gender diversity on individuals, the company, and society as a whole, and should guide senior leaders in modeling a commitment in their everyday actions.

2. Ensure that Hiring, Promotions, and Reviews Are Fair
Having policies in place to support unbiased hiring, promoting, and reviewing is not enough. Companies should actively require a diverse slate of candidates for open positions, including internal promotions, the report advises.

Companies also need better systems to ensure their policies are working. Currently, only 56 percent of companies review job descriptions for biased language, and fewer than 10 percent of employees say that personnel decisions are regularly evaluated for gender bias.

3. Invest in Employee Training
Do employees know what steps they can take to improve gender diversity in their companies? Only 28 percent of entry-level employees, and only half of managers, report that they do. They need training; in particular, bias training. “When employees don’t understand how bias works, they are less likely to make fair and accurate decisions and push back on bias when they see it,” the report explains. “As evidence of this, only 24 percent of employees report that managers regularly challenge gender-biased language and behavior.”

4. Set Goals and Be Accountable
Most companies track metrics on women’s representation, but only 40 percent hold their senior leaders accountable for performance against gender diversity metrics. Only 44 percent of companies set pipeline targets, and even fewer set targets for external hiring and promotions.

“This is hard work,” the report concludes, “but it is work worth doing.” When workplaces are demonstrably inclusive and fair, “Employees are more likely to think they have equal opportunities and to report higher employee engagement.”

The full study is available for download. The report is based on 132 companies, employing more than 4.6 million people, sharing their pipeline data and completing a survey of HR practices. In addition, more than 34,000 employees completed a survey exploring their experiences regarding gender, opportunity, career, and work-life issues.

Why Aren’t There More Women Speakers? You Might be Surprised
Sep 09, 2015

Editorial: The Invisible Obstacle for Women at Work
Feb 22, 2016