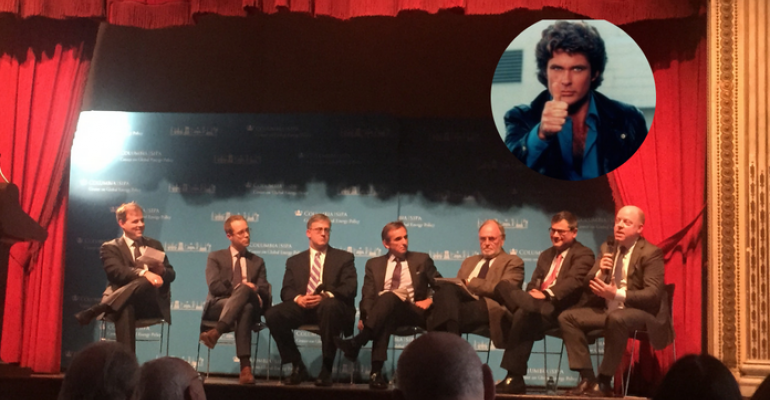 Is Your Panel on this Wall of Shame?

The list of all-male panels on the Congrats! You Have an All-male Panel Tumblr is dishearteningly long, and the humiliation of being featured on it is only compounded by each being stamped with a thumbs-up image of actor David Hasselhoff. The saddest example on my quick skip through was an all-male panel discussing the topic of expanding leadership opportunities for women in a religion—seriously, they couldn't find a single female to talk about that one?

I know it's difficult to find highly qualified speakers who can actually engage an audience, but as this blog makes all too clear, we have to do a better job of reflecting the diversity of our audiences in the people who populate our panels (or better yet, deep-six the whole panel thing and get a few interesting women on the agenda who will take the stage solo. If you want a few suggestions, here are 11.).

Looking at the Tumblr list, it doesn't appear that the movement Rebecca Rosen suggested in an article in The Atlantic a couple of years ago for tech and science conferences—men just refusing to speak unless there's at least one representative of the female gender on the stage—has caught on in any big way. Maybe it's too much to put the onus on the speakers, when it really should be on the meeting organizers who are putting those panels together to begin with.

I'm not advocating finding token, unqualified women for the sake of having a woman included, or suggesting that men are somehow colluding in a big on-stage power grab. I'm just saying that your audience members—men and women—likely are feeling a bit put off when the only people being presented as thought leaders are guys. But please, don't just inject a panel of women to talk about what it's like to be female in a particular profession, as happened at a conference I went to last year, into an otherwise all-male speaker lineup. That's just painful, and it seems to suggest that that's the only topic they were qualified to speak about, like only including young people to speak on panels about Millennials.

I think we all, male and female, would like to see more balance on our stages, be it relating to gender, race, religion, age, nationality, or any other important demographic. Who's on stage should look a lot like who's in the audience. Period. We can do better than this.

P.S. It's interesting that when I went to our image bank to find an image of a panel, they all included both genders, and different nationalities. I get that it's easier to find diverse models than diverse speakers, but c'mon.

Thanks to Mashable for the pointer.

How Meeting Planners Can Create Growth for Companies
May 14, 2015