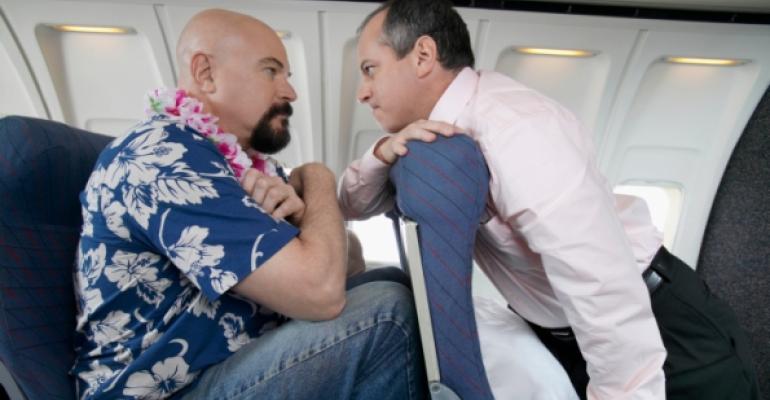 When It Comes to Comfort on Planes, Did We Ask for a Lack Thereof in Return for Cheap Airfare?

Travel consumer advocate Chris Elliott is so fed up with the current state of airline cabin comfort (or lack thereof) that he's calling for the government to set limits on how small seats can be. He's not buying the airlines' argument that passengers are willing to sacrifice cushion size and seat pitch for cheap fares. As he says,

"Truth is, as a consumer advocate, I’ve never received a request from a passenger to reduce the amount of space on a plane. No one ever asked to be squished into a seat in exchange for a deal. Airlines just assumed their customers didn’t care about comfort — something we now know isn’t entirely accurate."

While I, like most of us, have gone along with the increasingly miserable state of in-flight affairs—and I do tend to go with the cheapest flight, within reason (no 10-stoppers, please)—I absolutely agree that acceptance does not equal asking for it. It's more that we passengers feel powerless to do anything about it, especially those whose travel planning options are limited due to corporate travel policy mandates. Frequent fliers can mitigate the damage with free upgrades when they can, but for those who can't amass too many miles on any one airline due to said corporate policies or just our own meager budgets, well, we're stuck with what we get. We just suck it up and deal with it, and when we no longer can, every now and then explode into a childish fit of pique when someone reclines into our every-shrinking personal space.

"One fix is for a pro-consumer U.S. Senator to slip a sentence in the next FAA Reauthorization Bill, asking the Transportation Department to establish minimum seat space standards. FlyersRights.org is also pushing for legislation that would require the FAA to set seat standards."

Something that can be done without losing profits by just better designing aircraft interiors. (Aside: Check out this very interesting article on airplane design in the April 2014 New Yorker, and this one in the October issue of Wired—it sounds like we have the materials and the design knowhow, just not the will/willingness to spend the retrofit dollars on the hoi polloi sections, to make humane airplane interiors happen and actually save money in the long run.)

And now I saw this followup column from Chris, aptly titled, "Can you handle the truth about shrinking airline seats and baggage fees?", in which he counters the blowback he got from airline reps to his earlier editorial. Basically, the airline rep he quotes says that, because we meekly accept the worsening conditions and pay the fares we're offered, we asked for smaller seats and increasing baggage fees. Um, no, he says.

"When the airline industry says we “asked” for smaller seats, it’s lying. We did not ask for little seats with no legroom. We asked for low fares. That’s not the same thing and it never will be."

I'm not sure government regulation of seat size and pitch is the answer, but I don't have any other suggestions other than that we air travel consumers let our conveyers of choice know that we did not ask to be made miserable in exchange for cheap airfares. I personally would be willing to pay a bit more (and do to get my coveted aisle seat if I am forced to) in exchange for a slightly more humane experience.

What do you think? Is acceptance the same as asking for it? If this were a domestic abuse case, the answer would unequivocably be no, but is it different when it comes to a business relationship? And what, if anything, can we air travel consumers do to rectify the situation—or are you in fact OK with exchanging comfort for cheaper fares?

To Recline or Not to Recline—Is that Really the Question?
Aug 26, 2014