The NAACP has released its 2012 Opportunity and Diversity Report Card: Hotel and Resort Industry, and the results show we still have a way to go before we have a hospitality workforce that reflects the demographics of the U.S., at least when it comes to the five largest chains.

The NAACP Economics Department analyzed Hilton Worldwide, Hyatt Hotels Corporation, Marriott International, Starwood Hotels and Resorts Worldwide, and Wyndham Hotel Group, specifically looking at hiring and advancement opportunities for African Americans and other employees of color. They also examined the diversity reflected in the suppliers these chains use, and in hotel ownership, when it was applicable.

Marriott International went to the head of the class with a B grade for its "above average" performance in diversity and inclusion. The areas needing the most work at diversifying turned out to be at the management level, and in property ownership and in the supplier base. It's interesting to see where some of the chains are doing well and not so well though, isn't it? 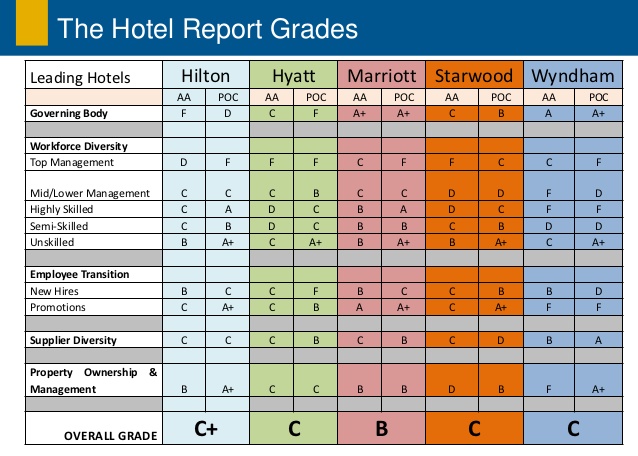 While meeting and convention planner is a title recognized in the report, unless I missed it, they don't break out diversity stats for that position, or its place on the management-oriented career path. Interestingly, they do point to chefs and food and beverage managers as being good places from which to leap to middle management jobs, but not general managers. According to the report, "While recent research suggests that younger general managers do not perceive the food and beverage manager position to be an important career stepping stone toward becoming a general manager, it (or a financial and sales managerial position) allows for more rapid advancement than other mid-level management positions."

If you don't want to read the full 37-page report, this Slideshare presentation provides a good snapshot.

Getting Hired in the Meetings Industry
Apr 21, 2015