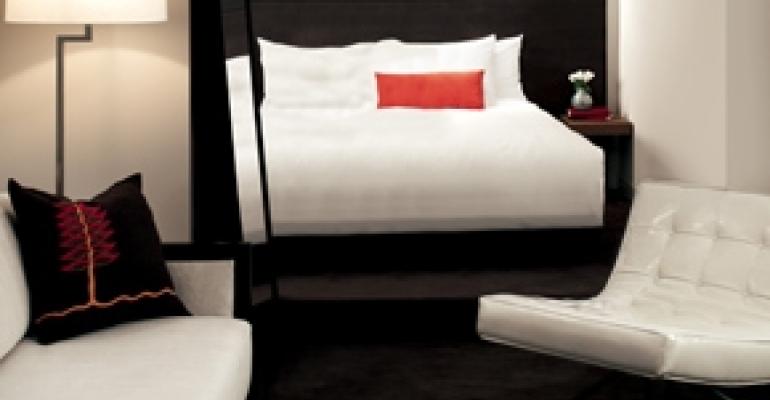 I'm out-hipped by my hotel

I've been in some nice hotels before, but I've never felt out-hipped by one until I got to The James this morning, just off Chicago's Magnificent Mile. This is more or less what my room looks like (I just pulled this shot from their Web site, so it's a little different):

It's beautiful, but it's so white! And it took me a while to figure out that that big tube in the corner was a light, not a piece of sculpture; the jury's also still out on the floating light bar above the bed—is it bright enough to read by? I'll find out later, I suppose.

Like a lot of hotels are doing nowadays, they've gotten rid of the ubiquitous armoire and replaced it with a flat-screen tv that is just huge, which is a good thing, but there are only two small drawers now for clothes, unless there's more storage space that is masquerading as a sink or something.

But enough quibbling—the room is gorgeous, the guy who checked me in was impeccable (big points for getting my room ready so early this morning so I had a place to rest my very weary head). Maybe it's just a culture shock, going from Alaska's Dall sheep to Chicago's ultra chic, but this hotel's just so much hipper than I am that it makes me feel like it might be humming that "I'm too sexy for my shirt" song, only I'm the shirt.

Hmm, could that be an excuse to go shopping?