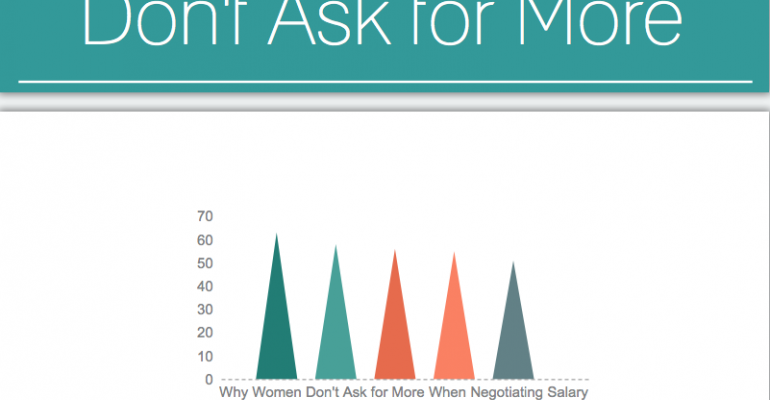 How to Negotiate the Salary You Deserve

Did you know that April 14 is Equal Pay Day—the day that women have to work into the new year to earn what men earned last year? That’s three and a half months, people! While the exact size of the gender salary gap varies depending on a lot of different factors—from 78 cents to 91 cents to the dollar—that there is a gap is pretty undeniable. According to the Professional Convention Management Association’s 2014 salary survey, for meeting planners the gap is just shy of 29 percent, with men earning $102,222 on average to women planner’s $72,880. Just to add insult to injury, women also pay the “women’s tax” on products:

And yet Equal Pay Day will likely pass without a whole lot of hoopla because, well, we women don’t like to make a fuss about such matters, according to a survey done by the professional network firm Levo. And it starts early, with only 21 percent of women negotiating salary or benefits for their first job—something that can cost up to $500,000 in lost wages over the course of a career. I know I didn’t negotiate my first salary—I’m clearly among the 51 percent to whom it never occurred that I could, or should, negotiate when I got that coveted first job offer in journalism. But it’s not just a generational thing affecting baby boomers: Fully 60 percent of Millennial women aren’t negotiating salaries in 2015, either.

You may also want to read: 3 Ways to Advance Your Meeting Planning Career

Even—or perhaps even especially—for career paths like meeting planning, which tend to be overwhelmingly comprised of women (83.3 percent are female, according to About News—nursing is the only profession that’s even more predominantly female), there remains that 28.7 percent gender salary gap.

There are lots of reasons why men earn more even in female-dominated industries—a lot of it may be due to some hardwired, likely unconscious biases, according to this article in Fast Company. Other possible causes could be parenting and other domestic issues, a lack of ongoing training, mentors, and female role models, according to this interview with Francine Blau, an award-winning labor economist at Cornell, in The Atlantic a few years ago. But I think a lot of it boils down to the fact that we just don’t feel comfortable asking for what we’re really worth. According to the Levo research:

Meeting professionals may be great negotiators when it comes to getting a good deal for their internal or external clients—it comes with the territory. But when it comes to negotiating their salaries? Not so much, it would appear.

There are some good suggestions in the Fast Company article, including researching average salaries for your job type, location, and experience level; talking to others to find out what they found to be successful when negotiating salaries and raises; and practicing your negotiating tactics ahead of time. Another good resource is to follow the #Ask4More campaign Levo is conducting.

But I think it’d be wrong-headed to put all the onus on the asker. Employers also should be thinking about their employee demographic mix, and the resources they offer. Do they make it clear that an applicant won’t lose the job offer if they negotiate salary or benefits? Do they offer coaching, professional development tools, mentoring programs? HR that supports career pathing that’s friendly to both men and women?

Clearly, we all can do more to make this a more equitable place for male and female workers. Let’s get started.