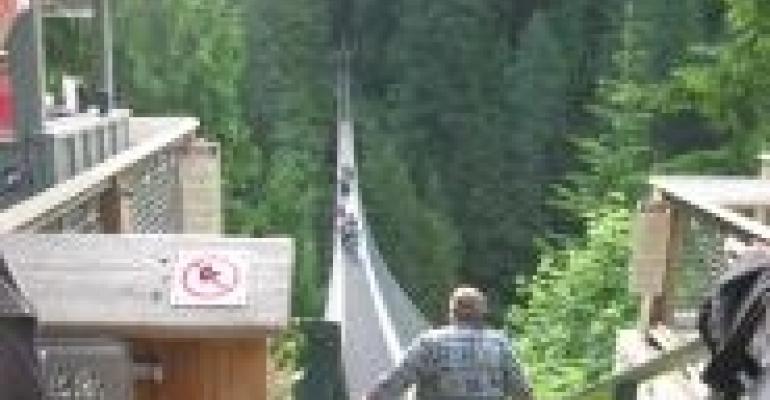 Just got into town for MPI WEC last night around 5 pm local time, and already I have fallen just a wee bit in love with the place. Of course our hosts from Tourism Vancouver and the Vancouver Convention Centre are showing us a most excellent time on a pre-fam press trip, from swaying over the Capilano suspension bridge to an unbelievable dining experience last night atop the Grouse Mountain Resort (the trip back down the mountain on the tram, with a partial moon glowing over the city lights, was downright magical).

Then today we got to check out the Coast Coal Harbour Hotel (you would not believe how green the place is -- built to be zero waste, and achieving it), and the Fairmont Pacific Rim (oh, oh, oh, I want to stay there some day, and if you ever get the chance to eat at Oru, grab it!). We also go to hob nob with the critters at the Vancouver Aquarium, including tossing gobs of raw fish to two of the cutest sea otters ever, gawking at the beluga whales, and cooing over the dolphins. Then we took a quick spin through the new Klahowya Village attraction in Stanley Park, which I have to get back to and experience more fully. Like the aquarium -- can you imagine breakfasting with Beluga whales? -- it of course can be rented for group functions, including First Nation cuisine and interaction with aboriginal artisans, crafts people, and cultural tour guides.

This afternoon we did a quick spin through some of the cool neighborhoods and shopping areas, from Chinatown (second largest in North America after San Francisco, they told us) to Granville Island (must return and shop extensively). There are so many interesting venues our hosts kept pointing out as available for group functions that I'm almost wondering if there's anywhere in the city that wouldn't be amenable to a group event.

The most striking thing about Vancouver, well OK, one of the many most striking, is its relentless stalking of the green. The new convention center -- pardon me, centre -- is LEED Platinum-certified, for goodness sakes. Even its roof is green, literally, with local grasses and other plants. The food is locally sourced and made from scratch, the bits that jut into the water are designed to accommodate and encourage the water flora and fauna to flourish. I heard tonight that the aim is to get not just the city but the entire province to a state of environmental neutrality by the end of the year. It may take a bit of offsetting, but my money's on them making it.

To the environmentally friendly meeting evangelists among us, prepare for a major green geek-out. For the foodies, you're in for a treat (like gelato made with honey from the bee hives that live on the centre's roof!). For scenery lovers, well, you'll see for yourself. And I hear the weather is supposed to the current warm-but-not-hot temperature, low humidity, and clear skies we enjoyed today. Granted, we'll be in the convention centre most of the time, but it's nice to be able to peer at that gorgeous weather through the enormous expanses of glass and experience it vicariously.

OK, I'll stop going on and on, but just have to mention this, because I've not never seen it or even heard of it before. When we were touring the new convention centre building late this afternoon, a wedding party had taken over one of the upper levels, which had an outdoor terrace overlooking the harbor, for a reception. Bridesmaids and groomsmen beaming and toasting. In a convention center. Really.

(Disclosure: I was attending a press pre-fam trip hosted by Tourism Vancouver, the Vancouver Convention Centre, and MPI)