Global Association Meetings: A Force for Progress for 50 Years

A new publication from the International Congress & Convention Association traces the past half-century of international association meetings, emphasizing not their economic impact on host cities—which is significant—but rather their roles as drivers of societal change and of progress, particularly in the fields of science, healthcare, and technology.

Among the many statistics in “A Modern History of International Association Meetings” is the fact that some 2 million people participated in international association meetings between 1963 and 1968, while in the period between 2008 and 2012, that number grew to almost 22 million. Of course, while ever-more international congresses are held, and the total number of participants continues to expand, the impact of the on-site work extends far beyond those who attend in person.

ICCA’s report demonstrates this reach through case histories of meetings that have changed the world. The International AIDS Conference, for example, is the largest international meeting on HIV and AIDS, first taking place in Atlanta in 1985 and attracting 2,000 attendees. “For more than 25 years and in times of hope and frustration, the conference has played a central role in HIV, marking the evolution of the epidemic and serving as a platform for global discussion and presentation of scientific advances. The history of the HIV epidemic is interlinked to the International AIDS Conference,” ICCA’s report explains. The most recent conference—the 19th—was held last year in Washington, D.C., and drew 24,000 delegates from 183 countries. 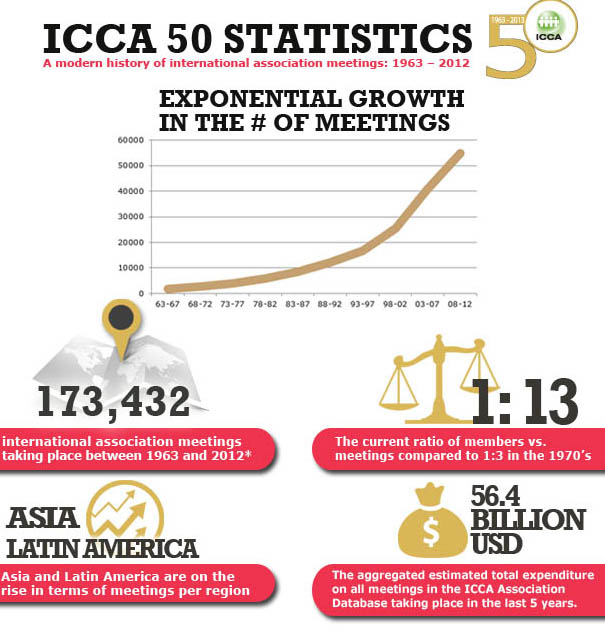 Smaller, Shorter Meetings, But More of Them
ICCA’s research shows that international association meetings are more popular than ever—but they are changing. The average meeting has fewer participants and is shorter in duration. But when ICCA looks at the overall picture, these trends are dwarfed by an even larger one: The number of meetings held has been doubling every decade since the 1960s. Here are some of the stats:

• Technological meetings show highest relative growth in the last 50 years: From 6 percent of all meetings in the first five years to 15 percent in the most recent five years.

• Medical sciences has always been the most popular subject matter, and remains so: 17 percent of all meetings in the past five years were about medical sciences.

• Science, which was the second most popular subject for the first four decades of the past 50 years, now drops to third.

Top Meeting City? It’s Been Paris for 50 Years
ICCA is well known for its annual rankings of the number of international association meetings hosted by cities and countries around the world, and Vienna has held the top spot for cities since 2005.

However, the new report reveals that Paris actually has hosted the most meetings in every five-year segment since 1963. ICCA explains this by commenting that Vienna’s meetings are reported right away to the database, while Paris meetings may be reported “two, three, or four years after they have taken place,” thus skewing the rankings.

Big risers in the ranks include three Asian cities—Singapore, Beijing, and Seoul—along with Barcelona, Berlin and Istanbul.

The Next 50 Years
ICCA engaged Rohit Talwar, CEO of Fast Future Research, to look ahead at global trends and think about how those forces might change the face of the international association meeting. Talwar considered advances in four areas—biological/life sciences, information technology/Internet, manufacturing/robotics/new materials, and human enhancement.

In those areas he touches on many ideas, some of which seem impossible (human lifespans of 500 years), some merely hard to imagine (brain/computer interfaces that create “a vast and collective intelligence”), and others that seem rather likely (robots delivering lectures).

Ultimately, though, Talwar wraps up with a love letter to cities and to meetings. “Will it matter where we live if we can access everything instantly?” he writes. “We believe that geography will remain an important factor for many decades. Nations and cities will still seek to develop a lead in certain sectors and look to build clusters that bring together education, research, innovators, and financiers in order to deepen expertise and accelerate the transition from idea to market offering. With such a vast array of new industry sectors opening up, the prospects for vibrant, forward-thinking cities, regions, and countries to thrive should increase. Although we can conduct trade electronically, cultural and commercial factors will continue to drive the desire to meet, network, build trust, and do business.”