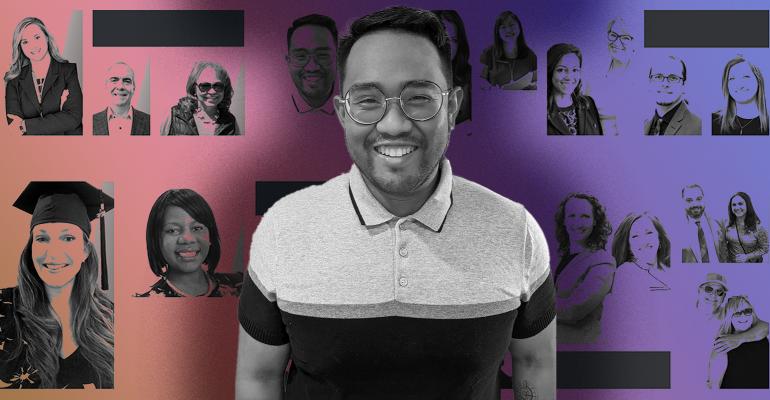 What If We Tried…?

Edward Bagsic, CMP, earned a spot on the 2021 Changemakers list by creating two new ways for attendees to network during his association’s virtual events.

As part of a team that converted two large National Business Aviation Association conventions to be virtual in 2020, Edward Bagsic came to understand the workings of the association’s virtual platform well enough that he started asking, “What if we tried…?” The result: Bagsic developed two new ways for online attendees to network and build relationships almost as well as they could in person.

For the NBAA’s annual Leadership Summit in March 2021, Bagsic and fellow planner Michelle Koblenz converted the virtual platform’s exhibit-hall module—which was not typically used for this smaller event—into a feature called Community Connect. “Our system offers interactive 3D booths, so we transitioned those to provide themed content and to host conversations,” he says. “We’re using the booths the same way that exhibitors use them when we run our big events, but as a means for the audience to engage with the content, the speakers, and each other.”

Bagsic uploaded all the pre-recorded sessions into their respective topic booths, adding other related resources for attendees to peruse on their own time and then submit questions to the session presenter and to each other. For instance, “our Young Professionals Council took the lead on starting and maintaining the booth chat for issues related to that attendee segment.” Another booth focused on diversity, equity, and inclusion, so “we brought in our working group for that issue to develop brief content clips and upload other material, and then answer questions from attendees and keep the conversation threads moving along.”

When the 270-attendee Leadership Summit resumes its in-person component next year, NBAA will continue to use the exhibit-booth functionality to connect in-person and virtual attendees before, during, and after the event.

Another event element that Bagsic created through NBAA’s virtual platform is called Cohorts. He took an idea that’s gained traction at some in-person conferences—creating small attendee groups that meet up at least once a day during the event to discuss what they’ve learned and experienced—and got it to work online. “The idea was to bring virtual attendees together to make the event feel smaller and more intimate,” he says. “We put a form on our registration site to ask people if they wanted to participate in an experiment where 10 people would ‘walk through’ the event together.”

Each attendee group had a leader from the NBAA staff—members of the business aviation management committee—who would accompany them through the show. “We allowed some time after each keynote for groups to meet, and they could set up other times they wanted to get together. We created chat rooms specific to each group, and the leader seeded it with a few questions to start the conversation each day.”

Those who participated in Cohorts “said they felt like they were getting a lot of the same quality of networking that they did face-to-face,” Bagsic notes. “They said it was far better than just going onto general chat forums once or twice a day.”

Given that NBAA’s future events will use a hybrid format, “we’re figuring out how Cohorts can work among attendees across both environments,” he says. “Our surveys find that networking is the biggest thing people are looking forward to getting back to, but we’re also finding that not everybody says they’re going to participate in person. Our system has to adapt to meet everyone’s needs.”