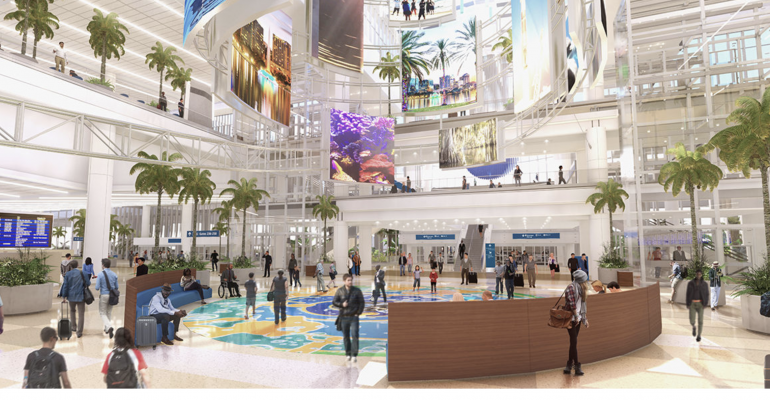 Orlando’s will debut by end of summer, while Chicago’s is coming in late 2023. Here are the details.

According to Cvent, the top-three destinations for conventions and trade shows in 2019—the last “normal” year for the events industry—were Orlando, Las Vegas, and Chicago. And it’s likely that, as meetings and events come back to being held in person throughout 2022, those cities will soon be at the top of the list once again. It’s good news for event planners, then, that two of those cities are preparing to open entirely or mostly new terminals at their airports.

First, at Orlando International Airport, the $2.8-billion Terminal C will open in stages over 15 days, starting on September 19. Phase one has 15 gates that can accommodate up to 20 aircraft, meaning capacity for an additional 10 million domestic and international passengers each year.

Airport officials told Orlando television station WESH that the terminal is also designed to provide an authentic Florida experience. Sunlight comes in through huge glass walls as well as the ceiling, while palm trees give an outdoor feel to two levels of restaurants and shops. Digital signage is located throughout the terminal, while check-in kiosks, automated TSA identification checkpoints, and facial recognition for international travelers will speed passage to the gates. In addition, an upgraded baggage-handling system gets bags from planes to passengers in minutes, regardless of weather holds or ground stops, and will also track them.

When Terminal C opens, JetBlue will be the biggest benefactor as it moves from Terminal A, where American, Air Canada, and Alaska still reside. Hawaiian Airlines and international carriers like Lufthansa and Aer Lingus are likely to join JetBlue in Terminal C, where four more gates are presently being built. Other phases of the project, which will bring the total gates in Terminal C to 60 plus add as many as 60 gates to now-lightly-used Terminal D, are planned in the coming years.

One other development that could help drive international attendees to Orlando: High-speed rail provider Brightline will move into the airport next year, offering visitors a quick and easy way to get to Miami, Fort Lauderdale, and West Palm Beach.

"There are people in many foreign markets who are used to arriving at their airports and having a rail connection” to get to other places, Kevin Thibault, CEO of the Greater Orlando Aviation Authority, told WESH. "It really is going to pivot this whole region” in terms of international appeal. Visit Orlando's CEO Casandra Matej added, "the fact that Brightline is going to connect Orlando to Miami is a huge success.”

The Windy City Is Keeping Pace 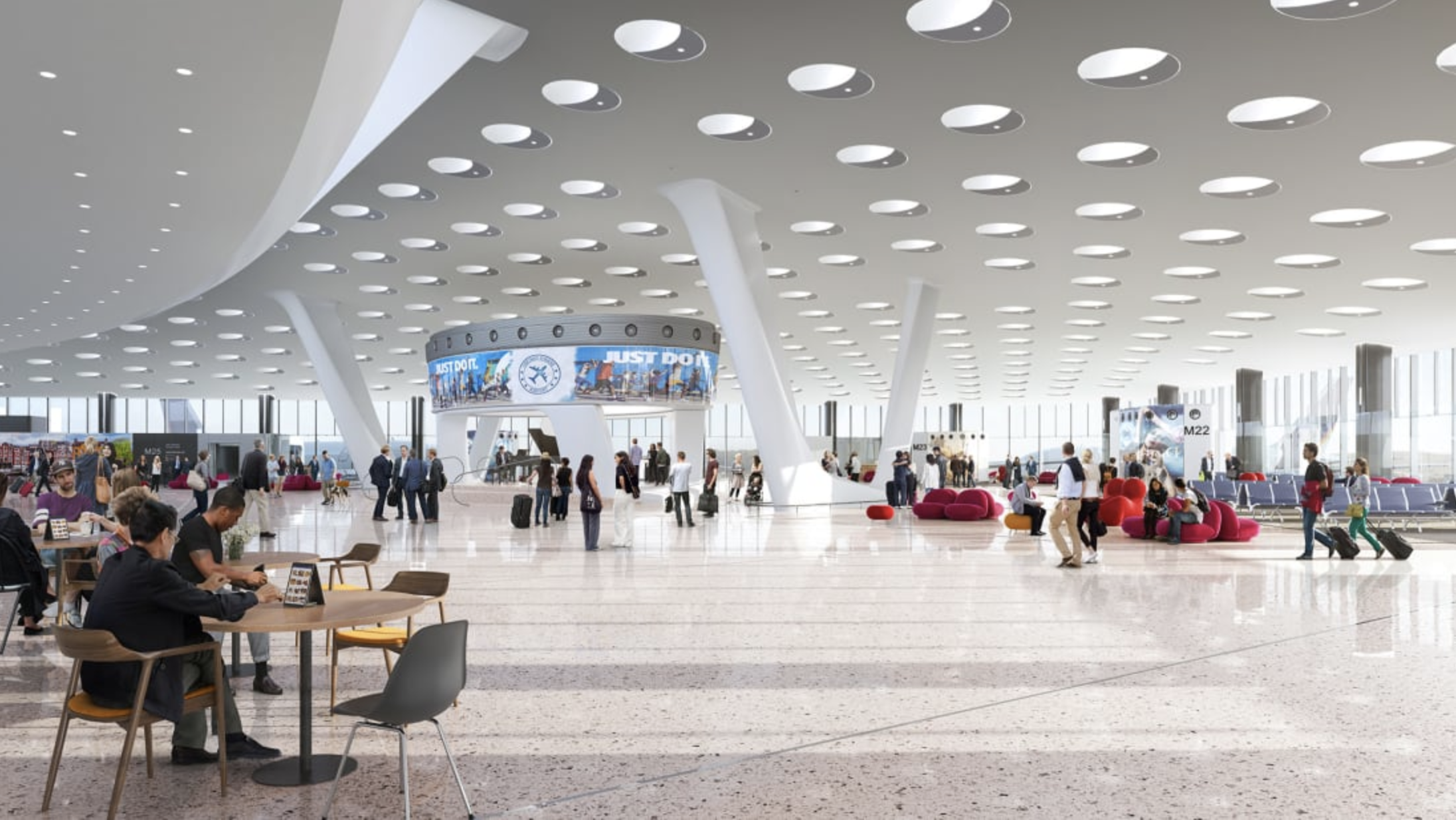 As for Chicago, the airport authority is spending more than $1 billion to revamp Terminal 5 (in photo) by late 2023. The work includes expanding its capacity by 10 gates as well as modernizing its systems for American Airlines and more than a dozen international carriers. However, the terminal will become less heavily focused on international flights, and more on airlines that are simply moving passengers to and from Chicago, while Delta will move to the terminal by end of 2022. There will also be a new baggage-handling system and new security checkpoints.

Further, a $2.2-billion investment is going into a completely new terminal dedicated to international traffic, which will start to rise once Terminal 2, the oldest one in use, is demolished. At the moment, O'Hare has a single international terminal that’s separate from the domestic one, so passengers on connecting flights have to switch terminals.

In the new building, to be called O'Hare Global Terminal (photo below), “passengers will be able to clear U.S. Customs, return to the secure area, and be closer to their departing gate, without needing to ride a train to a different terminal," Robert Hoxie, chief development officer for the Chicago Department of Transportation, told CNN in this article.

The Global Terminal will be Y-shaped, with a six-pointed glass skylight positioned at the meeting of the branches. The roof will be adorned with wood, with pleats oriented to maximize natural daylight. At 2.2 million square feet, it will be 75 percent bigger than the existing Terminal 2, and one of the largest in the country, allowing for amenities such as nursing rooms, yoga studios, and many food and beverage options. And its new baggage-handling system will have automated storage for 5,000 bags.

At the completion of the Global Terminal—set for 2028—the number of gates at O’Hare will total 230 versus 184 now, while the overall square footage of passenger terminals will go from about five million square feet today to just under nine million square feet. 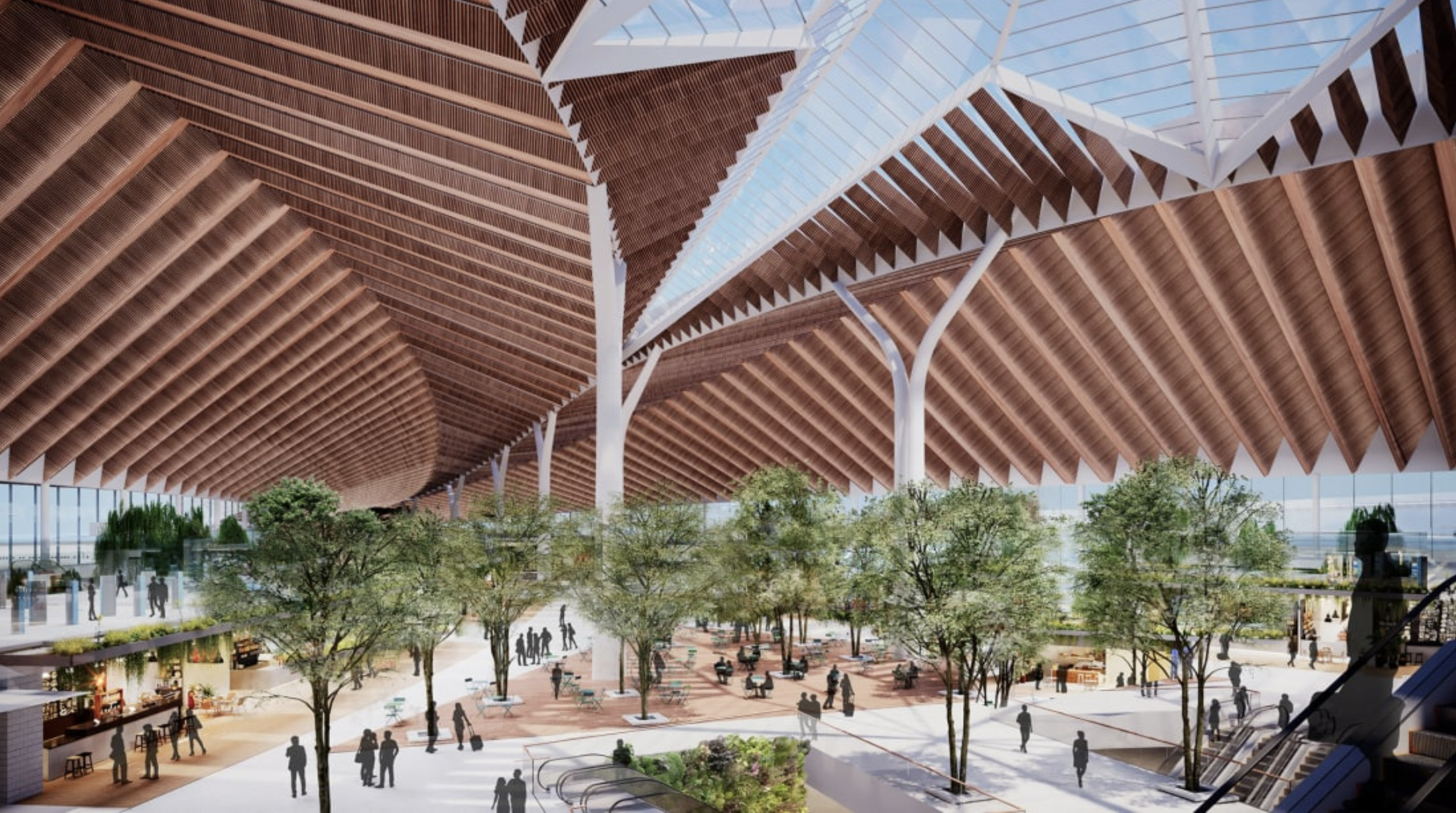