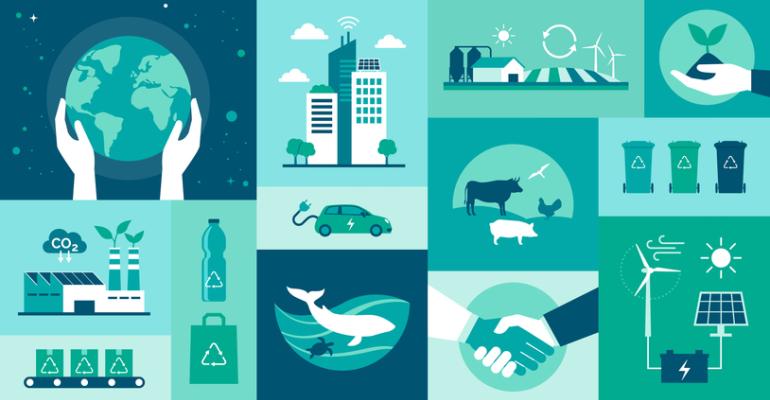 A Multi-Sided View of Trade-Show Sustainability

A new research report puts numbers to the most important environmental impacts of the exhibition industry, and also recommends ways for show organizers to reduce those impacts.

In a detailed report released in September by a task force of exhibition-industry heavyweights, some interesting figures came to light that could help exhibition organizers adapt their shows to make them more sustainable.

One such example: Roughly 80 percent of the total environmental impact of trade shows comes from greenhouse-gas emissions from participant transport, with venue energy the second-most substantial emissions source (about 10 percent). Meanwhile, service-contractor warehouse transport, venue waste, and booth construction are other measurable elements, but comparatively quite small in their overall environmental impact.

The report, titled “Finding the Future Together: Towards a More Sustainable B2B Trade-Show Industry in the U.S and Canada,” consolidates a series of internal research projects commissioned by a task force of 16 executives from large exhibition companies and industry associations. The research was conducted by independent firms Little Blue Research and A Bird’s Eye View; their work was supplemented by studies from the Center for Exhibition Industry Research as well as UFI, the Global Association of the Exhibition Industry.

Stats that Exhibition Organizers Can Use
The report found that emissions from participant flights for trade shows average 265 pounds of carbon-dioxide equivalent (co2e) per person. And while event organizers could host their shows in centrally located destinations to reduce flight lengths and promote drive-in attendance, the task force noted that “emerging evidence also supports the long-held belief that, as travel consolidators, B2B trade shows can effectively reduce overall emissions from travel that attendees take throughout the year. As studies have shown, participants believe that by accomplishing numerous goals in one place rather than traveling to different locations, they save time, money, and carbon emissions. A pilot study in 2020 of 15 events by exhibition organizer Informa [the parent company of MeetingsNet] estimated that those events resulted in a net saving of around 190,000 flights” in that year.

To reduce carbon emissions from travel, some of the show companies represented on the task force are partnering with rail companies in North America and Europe to provide discounts for participant travel. In addition, the report suggests that show managers provide airport-shuttle service and book hotels and off-site venues that are within walking distance of the event facility to reduce ground transportation emissions. Lastly, “organizers can work better to link together more regional and global events, allowing more goals to be accomplished for each trip” participants take.

Although material waste and booth construction are a distant second and third, respectively, on the list of environmental factors for shows, the report notes that there are ways to reduce their impacts. The average material waste produced per show participant is 3.5 pounds, of which 51 percent goes to landfills, 26 percent is recycled, 10 percent is combusted, six percent is composted, and five percent is donated. 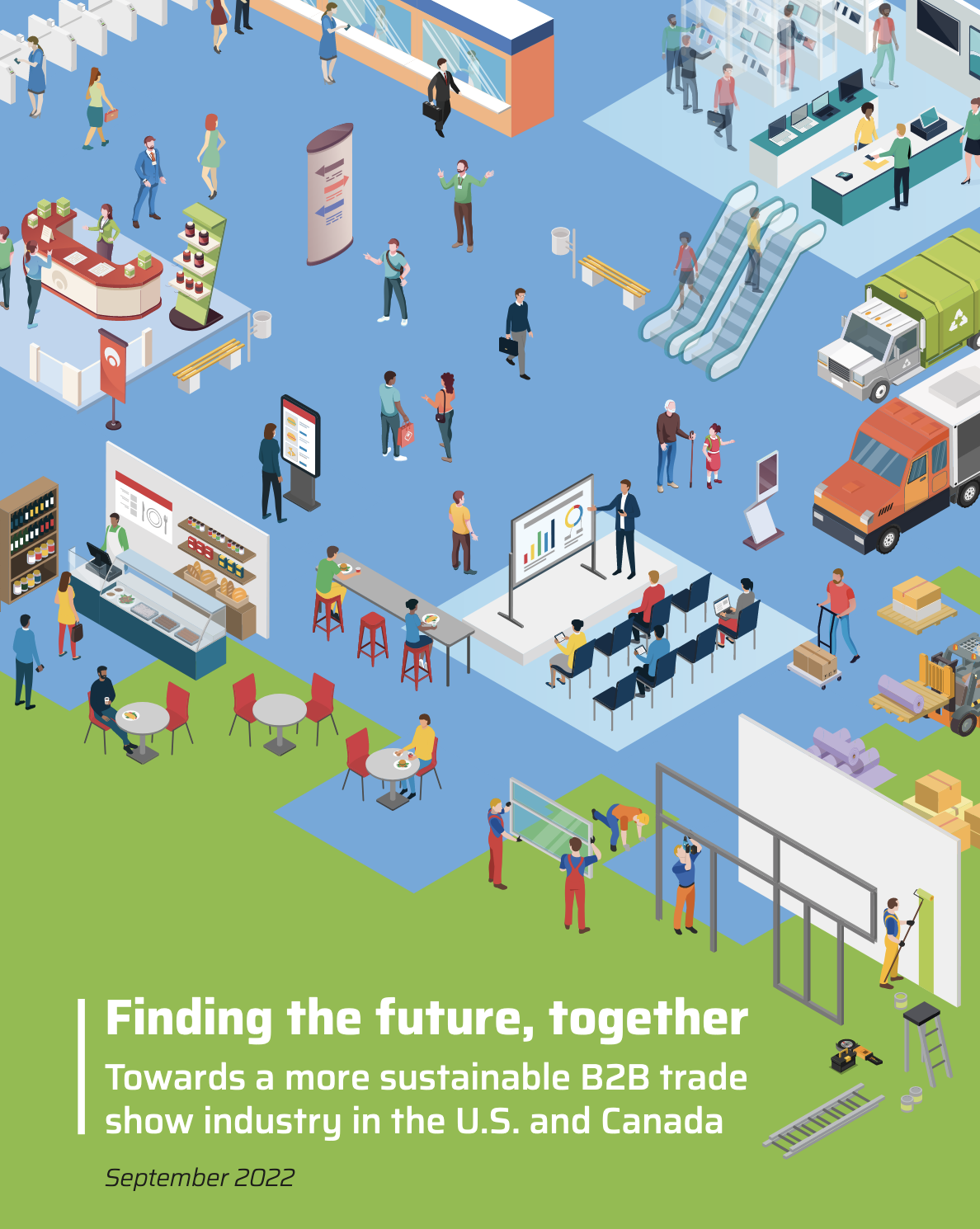 Significantly, the report found that less than 15 percent of shows’ plastic waste is recycled. “Interviews with venue staff revealed that recycling of [plastic] and other waste streams is driven by the presence or absence of appropriate bins, manual sorting, and other infrastructure,” the task force notes. “More work is needed to eliminate single-use plastics and ensure that any remaining are recycled by upgrading waste-handling infrastructure and running engagement campaigns. The task force also believes that a significant proportion, if not the majority, of plastic waste from events is made up of ‘hidden’ plastic from packaging, carpeting, and signage.” Two main targets of show organizers are plastic water bottles and poly bags used by exhibitors for takeaways. Both have eco-friendly alternatives, says the report: reusable water cups and other containers, and bags that can be reused long-term or that are made from quickly degradable materials.

With food waste, which represents 19 percent of the total waste produced, nearly 70 percent goes to landfill, 11 percent becomes animal feed, 10 percent is composted, six percent is donated, and three percent is combusted. The report notes that common food-waste items such as coffee grounds can be aerobically digested through composting to become nutrient-rich grey water, which helps water-challenged destinations save fresh water. Similarly, exhibition organizers are advised to ask the host venue about working with local farms to use food waste in an eco-friendly way.

As for booth construction, the report notes that carpeting is the item most responsible for non-recycled waste. One suggestion: More on-site storage capacity to hold carpeting and other show materials that could be reused.

Further, the report says that “Freeman recently launched a modern booth-building system, which is flexible, lightweight, and is both reusable and recyclable. The system’s high-quality aluminum reduces shipping weight significantly from previous systems, resulting in fewer carbon emissions during transport. It also reduces solid waste by replacing custom, single-use booths and structures.” The report notes that most pipe-and-drape booths are used between five and 25 times before being replaced, and that booth frames and furniture featuring replaceable parts are notably more eco-friendly than items that are constructed as larger, single units.

The full report, offering many other statistics and suggestions, can be found here.