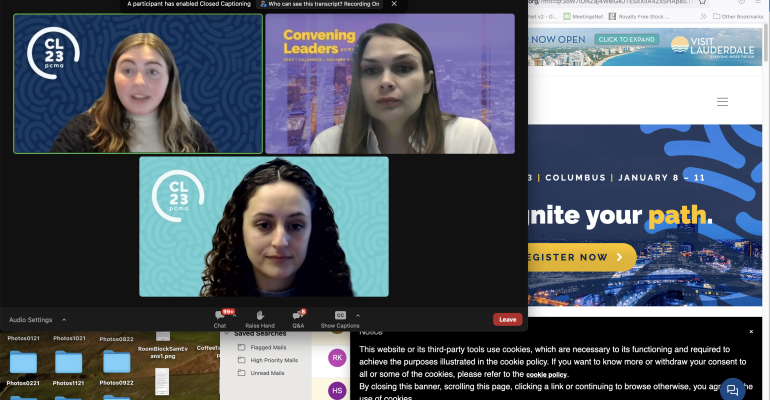 PCMA's event-planning team led the pre-show webinar, advising attendees on how to approach the educational sessions, the networking opportunities, the interactive event guide, and more.
Association Conventions and Expos

A Most Gracious Welcome: The “Know-Before-You-Go” Webinar

Conducted days ahead of your annual event, a brief, well-crafted online session lets attendees hit the ground running the moment they arrive on site. Here’s an example from the Professional Convention Management Association.

When Convening Leaders ’23 starts on Sunday, January 8 in Columbus, Ohio, event host Professional Convention Management Association will know that many of its attendees have done their due diligence to get the most out of the conference experience. That’s because on January 4, the association held a 40-minute “know-before-you-go” webinar that drew several hundred conference attendees eager to learn more about various logistical and content-related elements of the show.

Hosted by three members of PCMA’s events team—Megan Culligan, production director; Sharon Johnson, director of education; and Lianna Bolton, community development manager—and designed to field audience questions through Zoom’s Q&A feature, the webinar was built to provide both first-time and repeat attendees with enough information to plan their daily itineraries in advance and understand the features of the Notified web-enabled event platform, which doesn’t require an app download. The webinar allows attendees to dedicate their on-site time to learning, networking, and social-responsibility activities rather than figuring things out on the fly.

Johnson kicked off the webinar with an explanation of the conference theme, “Ignite Your Path,” and why the association settled on that focus. She then summarized the various topics that the main-stage and breakout sessions are grouped under, and how they relate to the overall theme. This year, event-tech innovation, DEI, and sustainability are high-profile topic headings, and Johnson emphasized the range of opportunities that attendees will have to learn from both experts and peers about what’s working in these areas, along with the challenges that still must be addressed. One other topic that will have just a single main-stage panel session, but which is critically important to planners: Salary transparency in the event-planning field and its potential effects on career paths.

While the PCMA staffers presented their summaries, several webinar attendees submitted an important question: What are the best peer-to-peer sharing opportunities on the agenda? Johnson replied that the 45-minute Conversation Starter sessions each day will feature five different topics for groups up to 30 attendees to address via small-group conversations. She added that the sessions are first-come, first-served, so attendees should prioritize which ones they want to participate in.

One last-minute bit of news that Johnson delivered was that Viola Davis, a multi-award-winning actress who was to be the closing keynoter on January 11, had to cancel because she was nominated for a Golden Globe Award; that show is set for January 10 in Los Angeles. Her replacement: Daniel Pink, a best-selling author on personal- and professional-development topics and chief speechwriter for Vice President Al Gore from 1996 to 2001.

Another important element that Johnson addressed is that not all breakout sessions will be recorded this year, based on PCMA’s data on total post-conference views of certain sessions in years past. As a result, she gave this scheduling advice to attendees: Prioritize those sessions where you’ll want to collaborate with others, and leave some other sessions for on-demand viewing in the near future.

Next, Lianna Bolton spoke about the conference features dedicated to first-timers, including the “PCMA Connect” hub in the prefunction space. It’s where novice attendees can mingle with fellow newbies as well as veteran attendees who can offer their perspectives about various planning-related topics plus guidance on navigating the show.

Lastly, Megan Culligan announced the details of the one-hour gamification main-stage session happening on the afternoon of day three. Called “Columbus vs. the World,” the trivia game will be open to all attendees, pitting on-site participants against virtual participants from around the world. The questions will cover event-planning elements, issues, terms, and definitions, and prizes will be awarded to those who are victorious in this “educational entertainment” segment.

PCMA’s Convening Leaders ’23 conference begins in Columbus on the evening of Sunday, January 8, and concludes on the afternoon of Wednesday, January 11.